The Holy Kingdom of Fergus is a micronation. 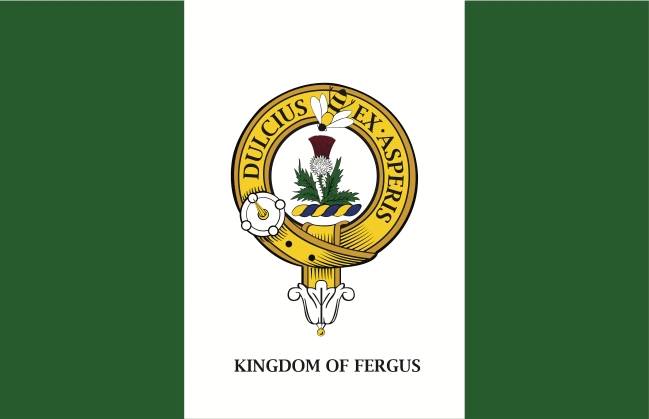 Flag of the Kingdom of Fergus

Fergus was founded on 25 February 2007, the birthday of its sovereign, Ben I. Its establishment reflects His Majesty’s interest in the global micronationalist community. As a graduate student at Wichita State University, the king (Bennie Lee Ferguson) authored a Master’s thesis entitled “What Is a Nation: The Micronationalist Challenge…,” one of the few serious academic words addressing the legitimate political, legal and cultural issues encompassed by the micronationalist phenomenon.

The kingdom’s establishment was in part, an attempt by Ferguson to interact with other contemporary micronationalists as one of their own.

The Kingdom of Fergus was originally located on a parcel of land on the outskirts of the city of Hutchinson, Kansas in the United States, which Ferguson inherited from the late Queen Mother Alberta.

In September of 2012, the kingdom annexed territory on the banks of the Arkansas River which became the Queen’s Tryst Protectorate.

The Fergusian state has experimented with various government instruments, including a prototype monetary unit called the Davelar, as well as plans to mint specie, produce postage stamps, and issue passports. A flag was chosen which features the traditional Scottish Ferguson family coat of arms and the motto, “Dulcius ex Asperis” (“Sweeter after Difficulties”).

In 2022, King Ben I attended MicroCon 2022 in Las Vegas, Nevada and presented his thesis to the assembled delegates. During this event, he was awarded a knighthood in the Order of the Polar Cross.