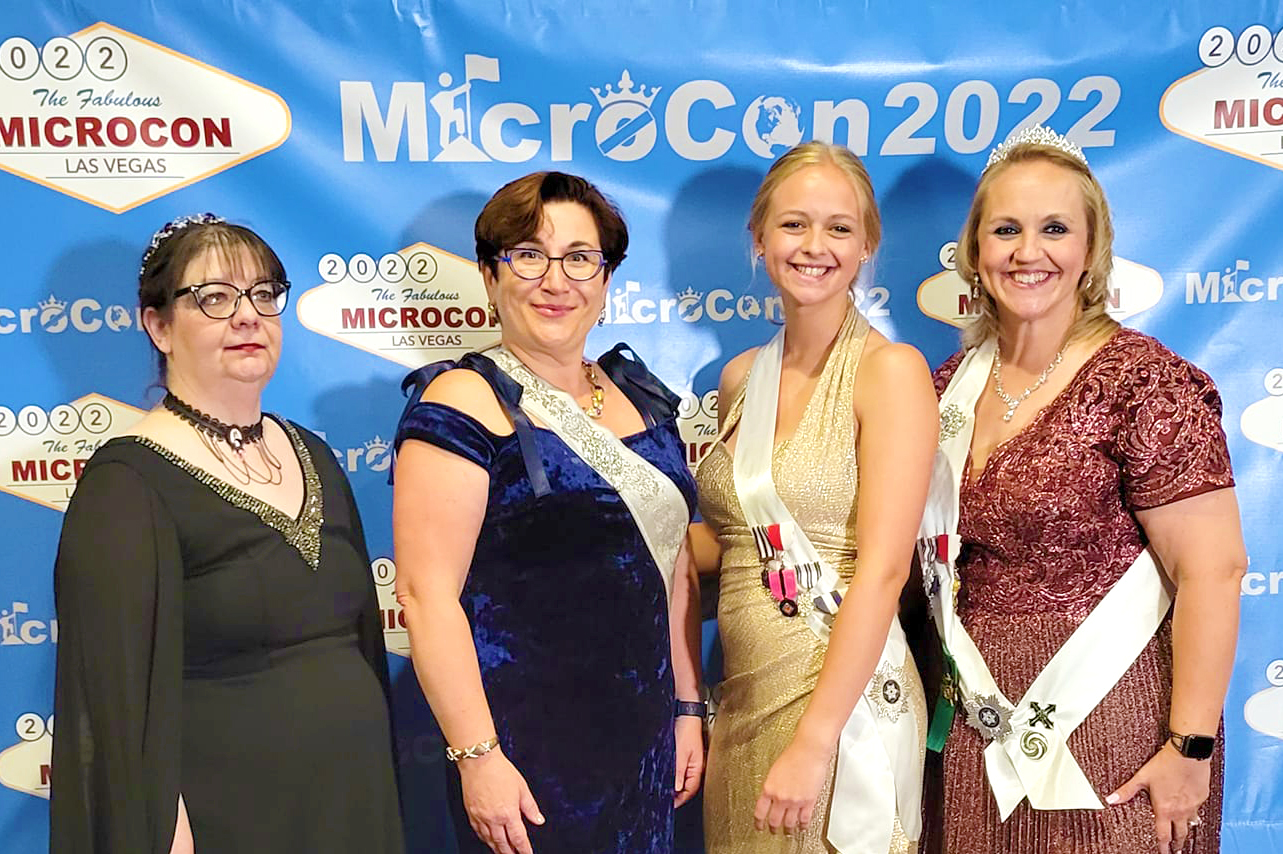 Delegates from Slabovia and Molossia gathered for the Gala Dinner

MicroCon 2022 was a micronational event that occurred from August 4 - 7, 2022 at Sam's Town Hotel & Casino in Las Vegas, Nevada. It was the fourth conference to be held under the MicroCon banner. The event had initially been planned for Summer of 2021, but was delayed due to the global COVID-19 pandemic.

It was hosted Westarctica and was a major event in the history of foreign relations of Westarctica. 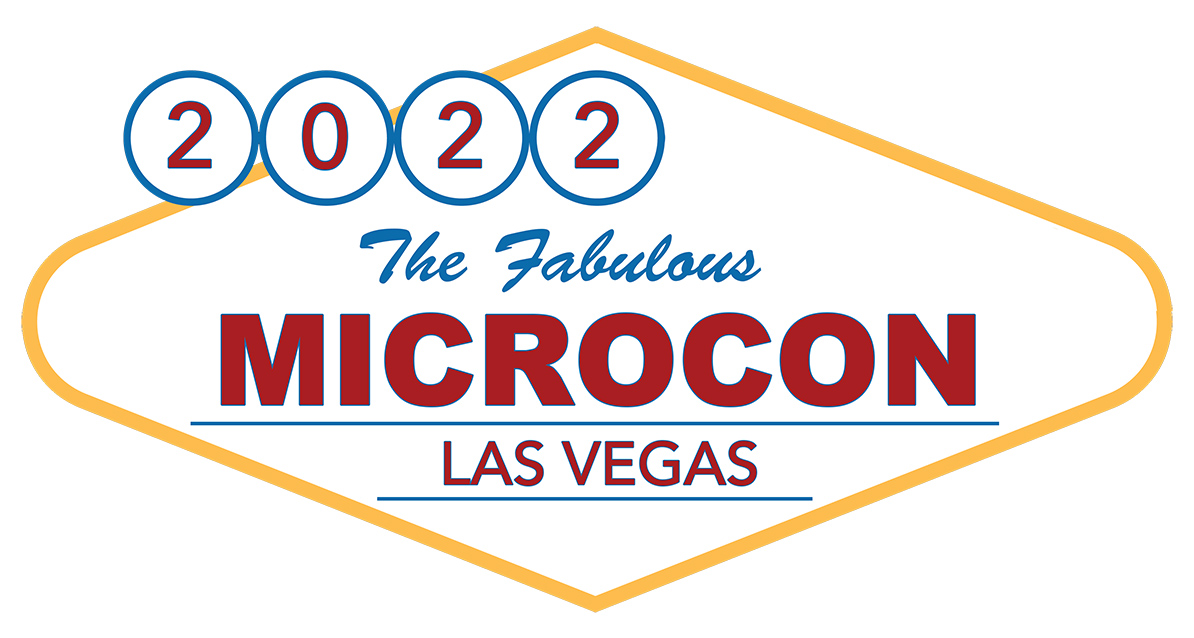 Following the closed door sessions between Molossia, Ruritania, and Slabovia during MicroCon 2017, it was decided that an organizing committee should be created to vet and approve any future events that use the MicroCon brand. This committee would be comprised of current and past hosts of MicroCons and give approval by voting on proposals received from hopeful hosts.

Immediately following MicroCon 2017, Grand Duke Travis and King Timothy of Shiloh discussed the possibility of jointly hosting a summit in Las Vegas, Nevada. Vegas was selected due to its cheap flights, wide array of hotel options, and first class entertainment. Grand Duke Travis wrote the proposal and submitted it to the MicrCon committee in May 2019. It was approved two months later while the Grand Duke happened to be in Vegas with the Prince-Consort. The official announcement that Westarctica would be serving as host and the location of Las Vegas was announced by King George II of Slabovia at the conclusion of MicroCon 2019 to great fanfare from the audience.

By the end of 2021, Shiloh had stepped back from planning the event leaving Westarctica to have sole hosting duties.

The Organizing Committee was responsible for planning and organizing the activities, venue, and date of MicroCon 2022. The members were:

The first planning meeting of the Organizing Committee occurred on 7 January 2020 at Downtown Disney in Anaheim, CA, only a few miles away from the site of the first MicroCon. The event's official website was launched two days later to share the committee's proposed schedule. 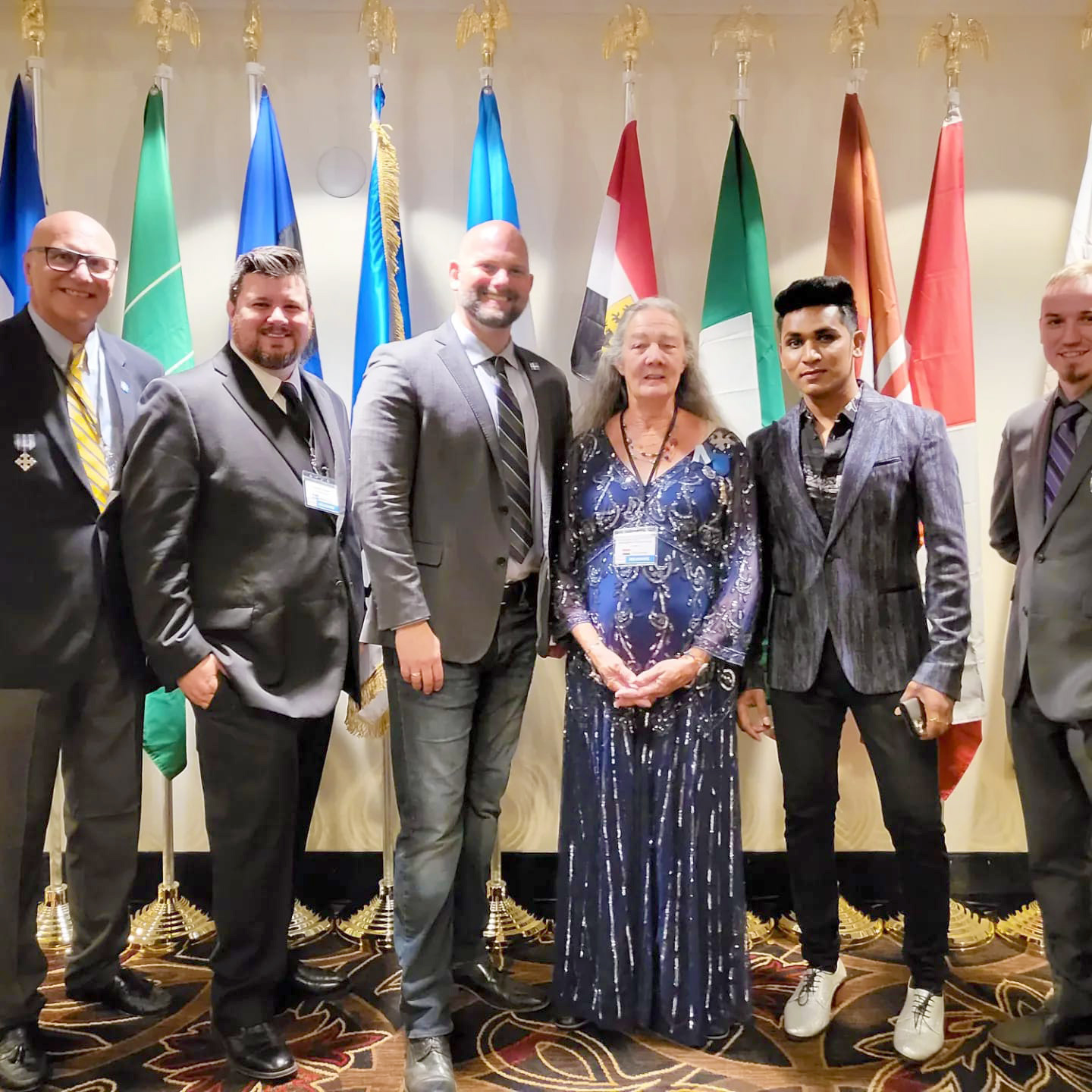 With each successive event since 2015, MicroCon organizers have added additional days to the schedule of conference activities. This was the first MicroCon to feature four days worth of events.

On 4 August 2022, the MicroCon festivities officially began with a welcome party hosted at the private residence of Grand Duke Travis and Prince-Consort Dinny. Attendees were invited for a three hour get together in a casual setting. Approximately 50 guests enjoyed food and drinks provided by the royal couple while socializing in the house or lounging beside the swimming pool.

On 5 August, the formal portion of MicroCon was ushered in with a four hour diplomatic reception located inside the Red Rock Ballroom at Sam's Town Hotel and Casino. From 6:00pm - 10:00pm, attendees discussed matters of micronational importance with one another while shoring up their diplomatic ties with foreign nations.

Display tables sharing information and artifacts from each attending micronation, a common sight at previous MicroCons, were in place for the delegate's viewing pleasure.

When collecting their gift bags before the event, attendees were simultaneously honored with a knighthood in the Order of the Polar Cross, an order of chivalry created by Grand Duke Travis to recognize friendship among micronations.

The main conference occurred on Saturday, 6 August at Sam's Town Hotel and Casino. Approximately 100 delegates and 10 members of the press were in attendance to learn from their fellow micronationalists during a series of 16 presentations covering every possible topic from art to politics. Originally, only 14 presentations were scheduled, but one nation dropped out and three others were added to fill the open space.

Coffee was available and breaks were given every hour. From 12:00pm - 1:00pm, box lunches were served featuring five different kinds of sandwiches.

Queen Carolyn of Ladonia announced that her nation had won the bid to host MicroCon 2023 in Chicago, Illinois.

After the presentations were completed, one hour was allotted for an "Awards Royale." During this time, attendees were encouraged to give one another medals and awards which might otherwise take up valuable time during the gala dinner awards ceremony. 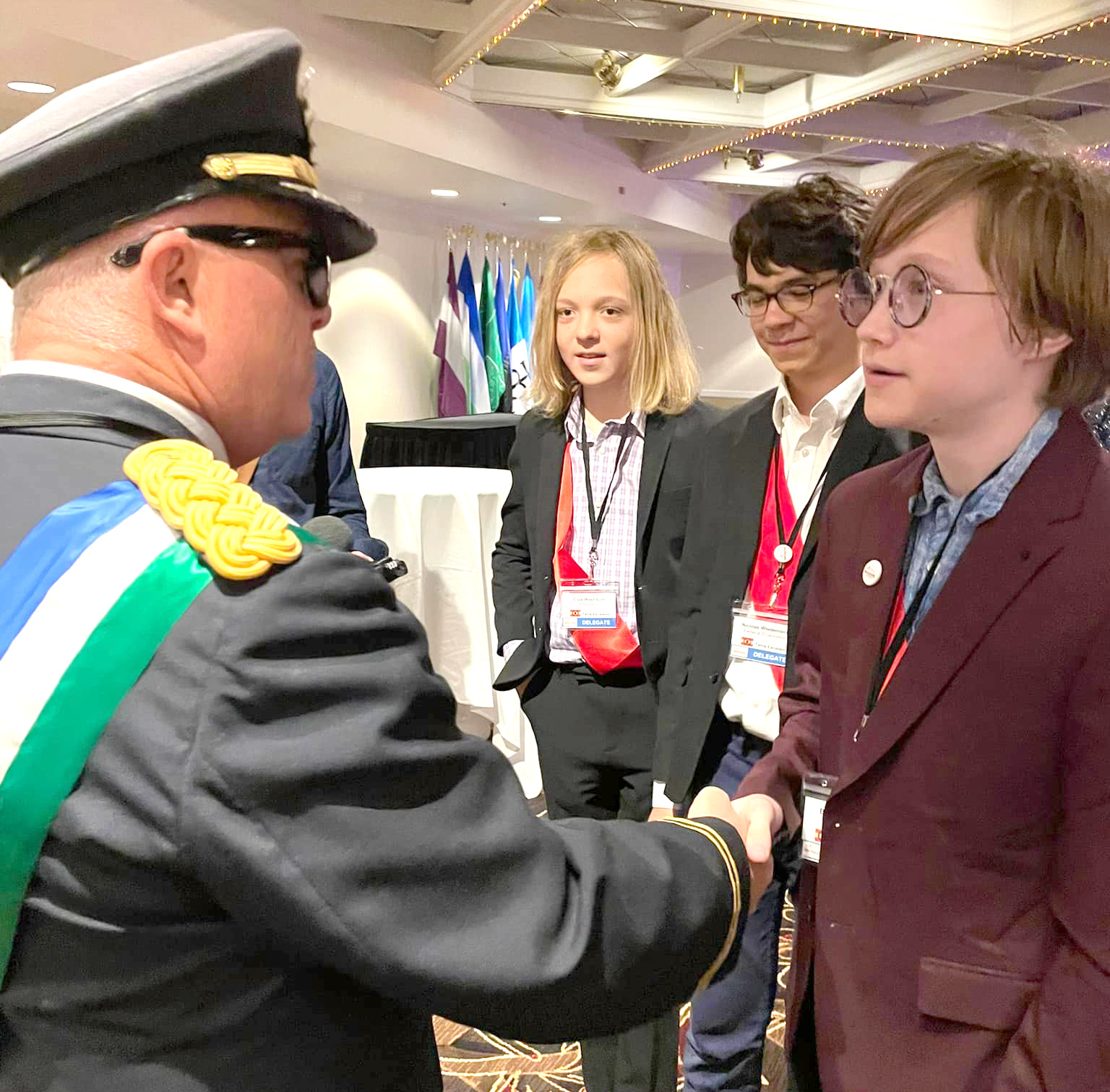 The formal gala dinner took place on Saturday evening following the main conference presentations. This dinner launched at 7:00pm, after a few minutes were set aside to take the ever-popular MicroCon group photo, which was snapped inside the beautiful green atrium of Sam's Town.

The dinner theme was "Food For Thought," featuring the following menu: 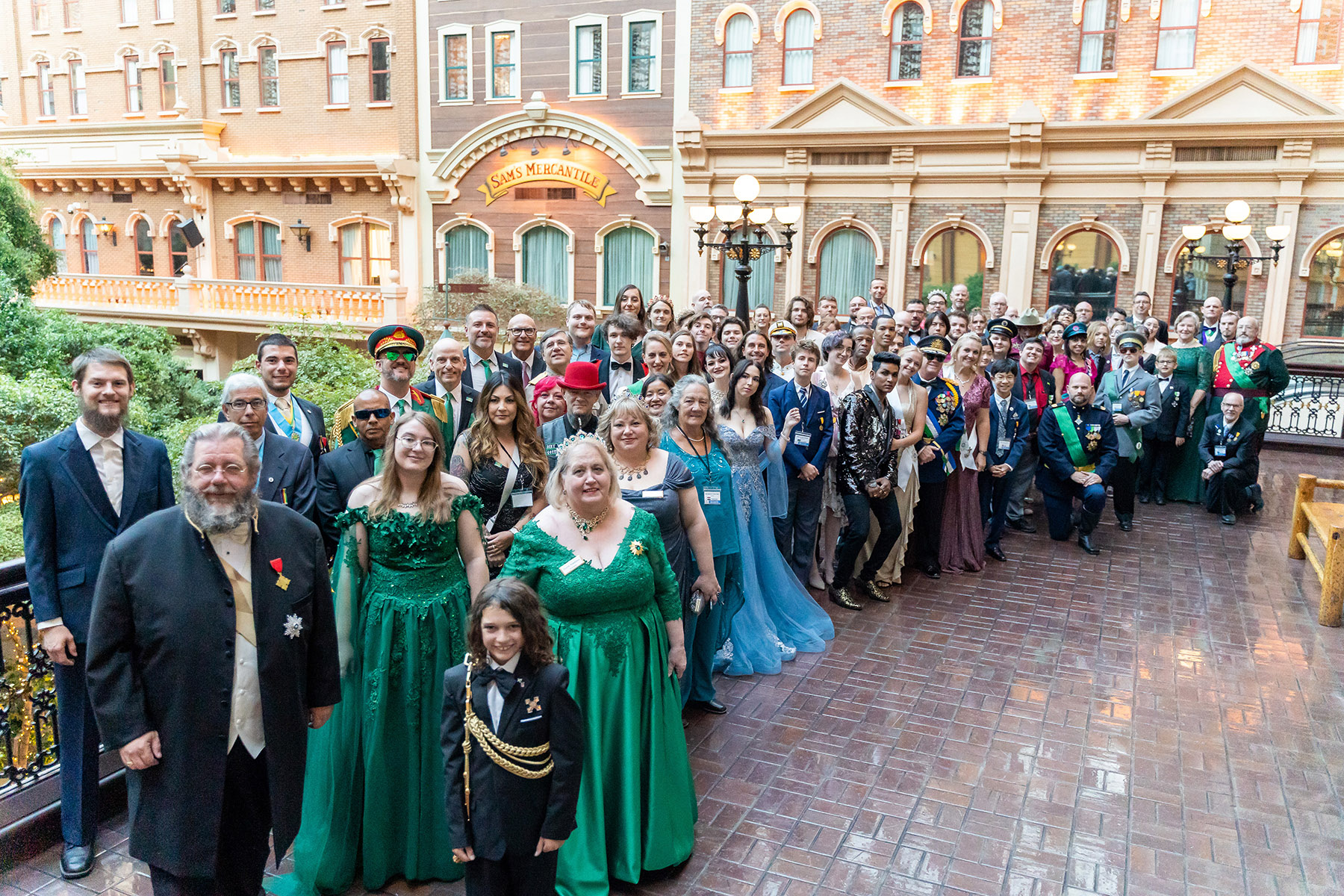 Group photo of all attendees of MicroCon 2022

The awards ceremony was broken into two parts: the first was the Micronational Hall of Excellence whereby Prime Minister Jordan Farmer inducted the first eight awardees. Two recipients were on hand to accept their award in person and two others were accepted on the awardees behalf by someone from their micronation.

During the second part of the awards ceremony, attendees bestowed the highest award from their nations upon other attendees. In previous MicroCons, this ceremony sometimes took hours to complete, but utilizing the new format, it was wrapped up in a brisk 45 minutes due to the great success of the Awards Royale earlier in the day.

As the gala began to wind down, Commodore Miller from Molossia took to the stage and hosted a wildly popular MicroCon Pub Trivia event.

On Sunday, 7 August, 31 delegates met together for an informal bowling tournament at the Sam's Town Bowling Center. Matthew Salzer of Ladonia kept track of the scores and awarded the top three bowlers with certificates of achievement.

The top bowler, representing the micronation Beatus Cras, also received a .999 silver coin from the leaders of North Barchant.

The event was attended by 30 micronations: