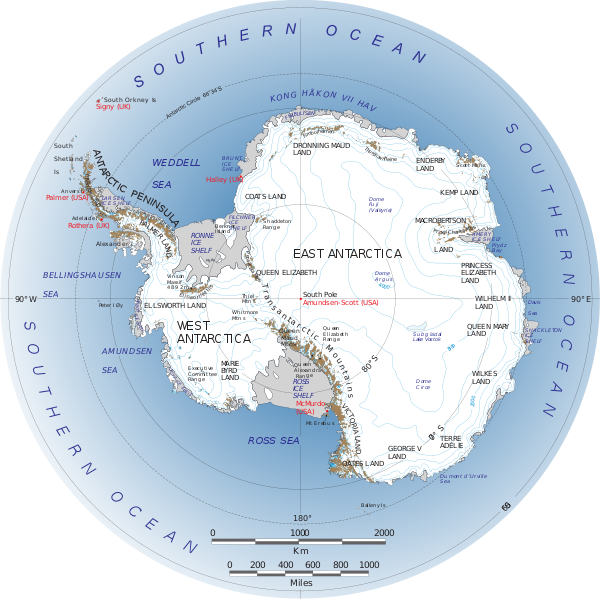 The East Antarctic Ice Sheet (EAIS) is one of two large ice sheets in Antarctica, and the largest on the entire planet. The EAIS lies between 45° west and 168° east longitudinally.

The EAIS is considerably larger in area and mass than the West Antarctic Ice Sheet (WAIS). It is separated from the WAIS by the Transantarctic Mountains. The EAIS rests upon a large land mass, contrary to that of the WAIS, which rests mainly on bedrock below sea level. The EAIS contains the thickest ice on Earth, at 15,700 ft (4,800 m). It is home to the geographic South Pole and the Amundsen-Scott South Pole Station.

Current international focus on global warming issues has drawn attention to the melting of the polar ice caps. An early analysis of GRACE-based studies data indicated that the EAIS was losing mass at a rate of 57 billion tonnes per year and that the total Antarctic ice sheet (including WAIS, and EAIS coastal areas) was losing mass at a rate of 152 cubic kilometers (c. 139 billion tonnes) per year. More recent estimate published in November 2012 and based on the GRACE data as well as on an improved glacial isostatic adjustment model indicates that East Antarctica actually gained mass from 2002 to 2010 at a rate of 60 ± 13 Gt/y.

It has been estimated that during the Pleistocene, the East Antarctic Ice Sheet thinned by at least 500 meters, and that thinning since the Last Glacial Maximum is less than 50 meters and probably started after ca 14 ka.

Cooling in East Antarctica during the decades of the 1980s and 1990s partially offset warming of the West Antarctic Ice Sheet which has warmed by more than 0.1 °C/decade in the last 50 years. The continent-wide average surface temperature trend of Antarctica is positive and statistically significant at >0.05 °C/decade since 1957.