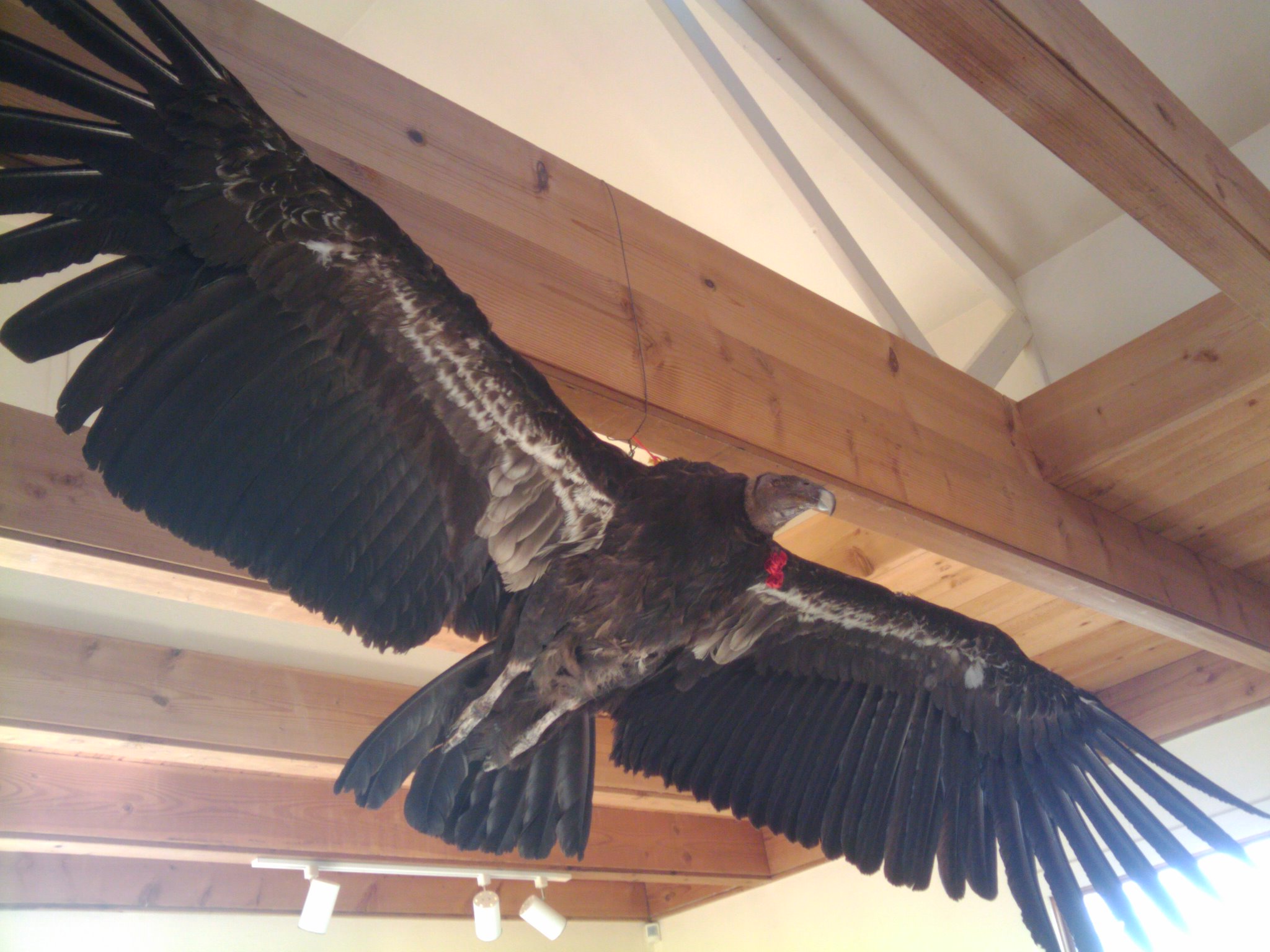 The California condor (Gymnogyps californianus) is a New World vulture and the largest North American land bird. It became extinct in the wild in 1987 when all remaining wild individuals were captured, but has since been reintroduced to northern Arizona and southern Utah (including the Grand Canyon area and Zion National Park), the coastal mountains of central and southern California, and northern Baja California in Mexico.

Although four other fossil members are known, it is the only surviving member of the genus Gymnogyps. The species is listed by the IUCN as Critically Endangered.

The plumage is black with patches of white on the underside of the wings; the head is largely bald, with skin color ranging from gray on young birds to yellow and bright orange on breeding adults. Its 3.0 m (9.8 ft) wingspan is the widest of any North American bird, and its weight of up to 12 kg (26 lb) nearly equals that of the trumpeter swan, the heaviest among native North American bird species. The condor is a scavenger and eats large amounts of carrion. It is one of the world's longest-living birds, with a lifespan of up to 60 years.

The condor's head and neck have few feathers, and the skin of the head and neck is capable of flushing noticeably in response to emotional state, a capability that can serve as communication between individuals. The skin color varies from yellowish to a glowing reddish-orange. The birds do not have true syringeal vocalizations. They can make a few hissing or grunting sounds only heard when very close.

California condors have the largest wingspan of any North American bird. They are surpassed in both body length and weight only by the trumpeter swan and the introduced mute swan. The American white pelican and whooping crane also have longer bodies than the condor. Condors are so large that they can be mistaken for a small, distant airplane, which possibly occurs more often than they are mistaken for other bird species.

The middle toe of the California condor's foot is greatly elongated, and the hind one is only slightly developed. The talons of all the toes are straight and blunt, and are thus more adapted to walking than gripping. This is more similar to their supposed relatives the storks than to birds of prey and Old World vultures, which use their feet as weapons or organs of prehension.

A conservation plan put in place by the United States government led to the capture of all the remaining wild condors by 1987, with a total population of 27 individuals. These surviving birds were bred at the San Diego Wild Animal Park and the Los Angeles Zoo. Numbers rose through captive breeding, and beginning in 1991, condors were reintroduced into the wild.

Since then, their population has grown, but the California condor remains one of the world's rarest bird species: as of 2019 there are 518 California condors living wild or in captivity. The condor is a significant bird to many Californian Native American groups and plays an important role in several of their traditional myths.