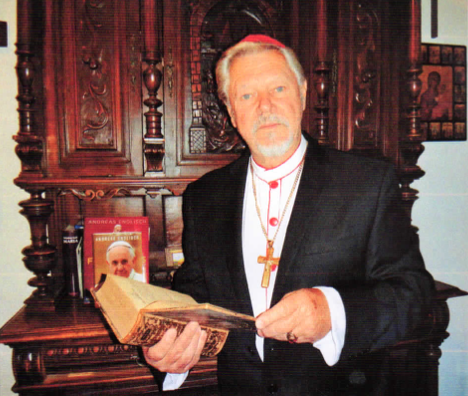 The Ecumenical Church of Westarctica was founded on 25 December 2018 as an independent Christian church within Westarctica. It is headed by His Grace, Archbishop Hans Kempe, who is also the Duke of Howe.

Although a legal entity in Westarctica, it is not a state church.

From 2004 - 2010, Christianity was the official state religion of Westarctica. However, following the 2010 coup d'etat, all religious activities were banned when the Grand Ducal Mandate was suspended.

In September 2012, the Charter of Westarctica guaranteed freedom of religious expression for all individuals, and two years later, the religious symbol of the cross was reinstated on the Flag of Westarctica. Although religion was permitted, there was no state church and the government took no official religious position.

Formation of the church

In November 2018, Dr. Hans Kempe, the Duke of Howe, wrote a proposal to Grand Duke Travis requesting permission to create a ecumenical church in Westarctica that would be open to all Christian denominations. After presenting the proposal to the Royal Council in his Q4 Royal Council Report, the Grand Duke gave final approval for the creation of the Ecumenical Church of Westarctica.

The church is headed by His Grace, Archbishop Hans Kempe, D.D., who had previously served as a Senior Bishop in the Philippine Ecumenical Christian Church since 2016. As Archbishop, he is responsible for creating all internal church laws as well as general governance of the church.

The Grand Duke requested that the church hold occasional virtual worship sessions for citizens of Westarctica who may wish to participate.