The Flag of Westarctica has gone through many changes since the nation first declared itself a sovereign territory. Although the original flag of the Achaean Territory was generally considered to be an eyesore, subsequent flags were designed to be more aesthetically pleasing while also encompassing the values of Westarctica.

There have been five flags representing Westarctica since the nation was first founded. Only two of these flags have ever actually flown on a flagpole.

The flag of the Achaean Territory is generally considered to be one the ugliest, most confusing flags in vexillological history. The pattern and colors of the lines (which strongly resemble a barcode) were actually based upon the medal / ribbon for the U.S. military's Antarctic Service Medal. Instituted in 1960, the ribbon has black stripes on each edge and is graded from a white stripe in the center to a pale blue, light blue, greenish blue, and medium blue. The outer bands of black and dark blue represent five months of Antarctic darkness; the center portion, by its size and colors – grading from medium blue through light blue and pale blue to white – symbolizes seven months of solar illumination, and also the aurora australis.

This flag was only ever created as a digital representation and was placed prominently on the letterhead of the 2 November 2001 Claimant Letter.

The first flag of Westarctica was designed by Grand Duke Travis in June 2004 after he was inspired by a vision of an interlinked cross and crown during a Presbyterian church service. The color teal, aside from being wildly popular during the early 2000s, was selected to represent the icy cold of the Antarctic climate. The color green was chosen because it is the Grand Duke's favorite color.

The overall design of the flag was based upon the flags of Nordic countries as well as the flag of Liechtenstein, which features a similar crown. The cross represents Christianity, as Westarctica was founded as a Christian nation. The crown represents the authority and person of the Grand Duke.

This flag also was never flown on a flagpole or created as anything other than an electronic representation. However, in 2005, an online flag retailer did make physical flags available for sale, but because each element was sewn separately together, the flag cost hundreds of dollars. So far as it known, no actual flags were ever created in this design.

The second flag used by Westarctica was created by Grand Duke Jon-Lawrence, who assumed the throne on 30 December 2008 following the abdication of Grand Duke Philip. The design is very similar to the original flag, with the most notable change being the addition of a gold cross outlining the original green cross. The tincture of blue was also lightened slightly to be less teal and more sky blue.

This flag was never sold to the public and remained a strictly digital creation. It was utilized as the official flag of Westarctica until 2010.

Flag of the Protectorate

On 2 June 2010, the government of Grand Duke Jon-Lawrence was overthrown in a coup led by the Grand Ducal Cabinet and the former Grand Duke Travis.

After the coup was completed, a Transitional Government was announced on 4 June 2010. This new government swept away the monarchy in the nation and removed all elements of the crown and religion from the national symbols. No longer a Grand Duchy, Westarctica was declared a territorial protectorate.

The flag of the Protectorate of Westarctica was the flag of Estonia turned upside down. A tri-color theme was selected to emphasize the departure of the monarchy and the rise of a civilian government administered by the people. The flag of Estonia happened to contain the colors of previous Westarctican flags:

It was the first flag of Westarctica to be created as a physical item and to fly on an actual flag pole. It flew outside the Consulate of Westarctica to Orange County (located in Garden Grove, California) for one hour in 2012. 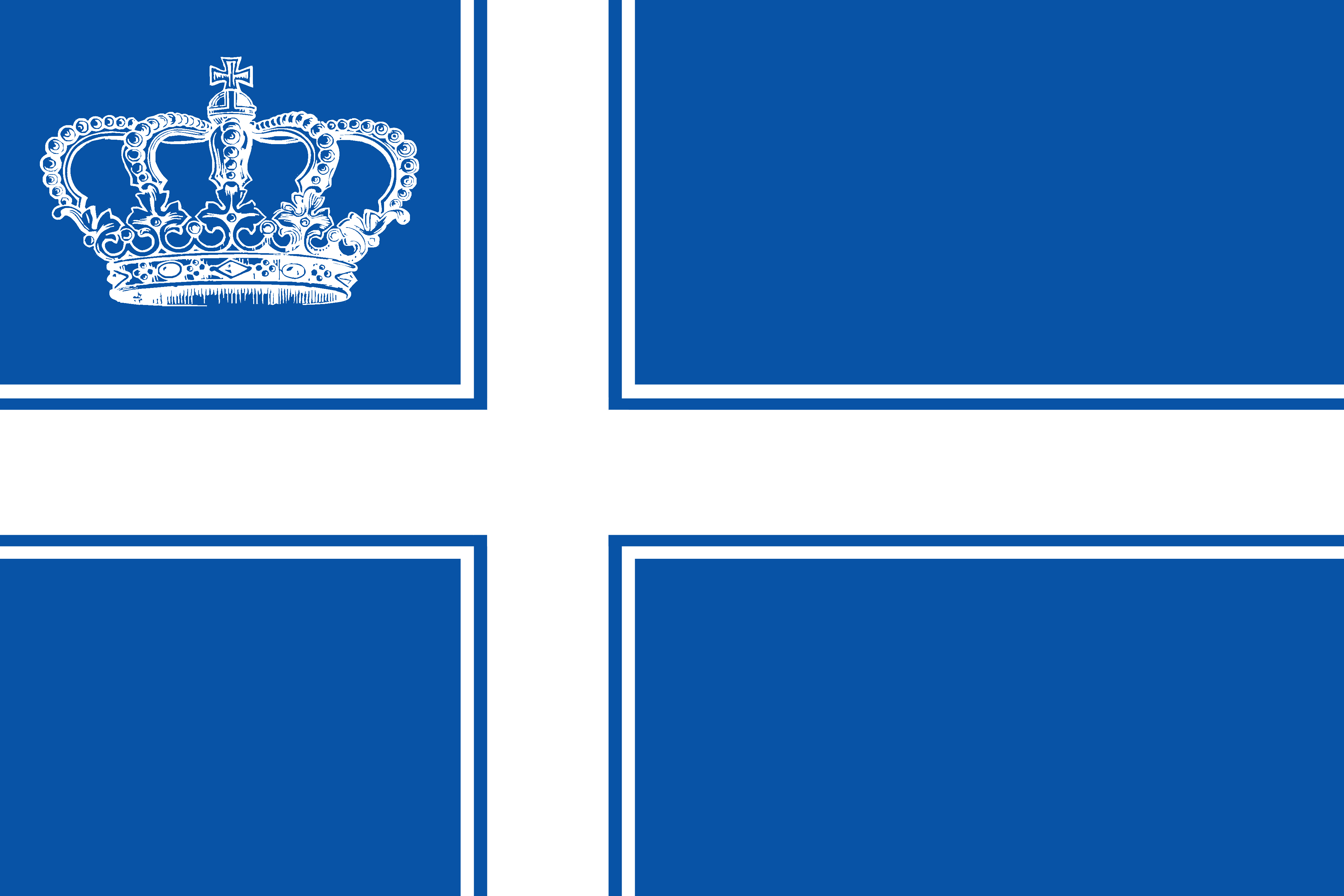 In late 2014, Grand Duke Travis decided it was time to bring back some of the old symbols of Westarctica. In a show of solidarity with the old regime, he created a new flag utilizing the old symbology of the "Cross and Crown" design. To make the flag more aesthetically pleasing, simple tinctures of blue (with the colorspace in CMYK of C=96.47%, M=75.29%, Y=0.39%, K=0%; in RGB R=16, G=84, B=165; webcolor #1054A5) and white were used instead of the original teal and forest green found on the 2004 - 2010 flags. The specific tincture of blue is called "Westarctica Blue" and is considered a protected official color of Westarctica.

The symbology of the flag should be easily apparent to even the most casual, uneducated viewer:

In 2016, the Grand Duke filed a copyright claim with the U.S. Copyright Office attempting to get the new flag design and color copyrighted, however his claim was denied due to their opinion that the design did not contain enough creative merit to qualify as a copyrightable work.

Other Flags Used in Westarctica

Regions of Westarctica are permitted to utilize flags of their own design provided they are first approved by the Grand Duke. This permission is typically only granted for semi-autonomous regions such as colonies and overseas territories.

The flag of the islands is the 2004 - 2008 flag of Westarctica with the colors reversed and the coat of arms of the Balleny Islands in the upper left quadrant in place of the crown of Westarctica. The coat of arms features heraldic devices from Spain, France, and the region where Mr. Vidal was born, as well as an emperor penguin, a symbol of Westarctica.

The white of the flag represents both surrender and peace, as the Calsaharan military surrendered their territory to the liberating Westarctican Royal Guards without a single drop of blood spilled. The cross and crown are carried directly from the flag of Westarctica, however the colors are inverted to blue instead of white. The two smaller outer crosses are green and red, which were the two colors of the Realm of Calsahara's original flag. Those colors symbolized passion (red) and love of nature (green).

The Royal Standard was designed in 2018 by the Baron of Abele for use by Grand Duke Travis both in his personal residence and when traveling abroad.

The flag is based upon the colors and design of the flag of Westarctica, with a crown, representing the royal personage, placed in the center of the standard. The upper left quadrant contains the heraldic device of the McHenry Family as found on both the Scottish and Irish arms of the Clan Henry and Clan McHenry. This device, known as "pelican in her piety" has been used by members of the Clan McHenry for over 200 years and can be found on the tombstone of Daniel McHenry, who settled the Fishing Creek Valley in north eastern Pennsylvania in the 1700s. 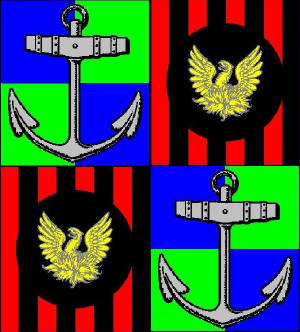 The first and fourth quarters are per cross bearing a silver anchor. These quarters represent the Moulton region. Moulton is home to the famous Icefalls. The green and blue represent the land and water. The anchor signifies the importance of the water, or specifically the falls, to the identity of the region.

The second and third quarters represent the Berlin Region. This region is named for Mount Berlin, an inactive volcano. These quarters feature a black pellet charged with a golden phoenix.

Given the Duke of Moulton-Berlin's relative retirement from Westarctican affairs, this flag hasn't seen use since 2010.