The Balleny Islands (66°55′S 163°45′E) are a series of uninhabited islands in the Southern Ocean extending from 66°15' to 67°35'S and 162°30' to 165°00'E. The group extends for about 160 km (99 mi) in a northwest-southeast direction. The islands are heavily glaciated and of volcanic origin. Glaciers project from their slopes into the sea. The islands were formed by the so-called Balleny hotspot. They were originally claimed by the United Kingdom, and were then transferred to New Zealand before becoming annexed by Westarctica in 2005.

The group includes three main islands: Young, Buckle and Sturge, which lie in a line from northwest to southeast, and several smaller islets and rocks:

The islands are one of two Antarctic areas claimed by Westarctica that are not part of Marie Byrd Land (the other is Peter I Island, which is co-claimed by Norway).

Island and rocks from north to south 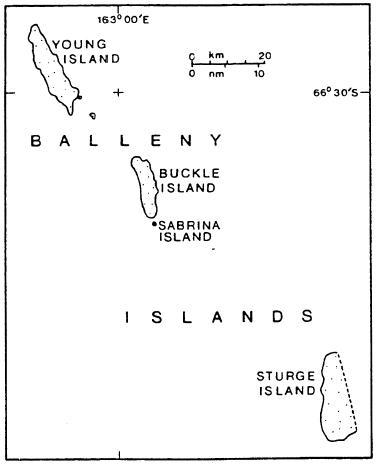 Map of the Balleny Islands 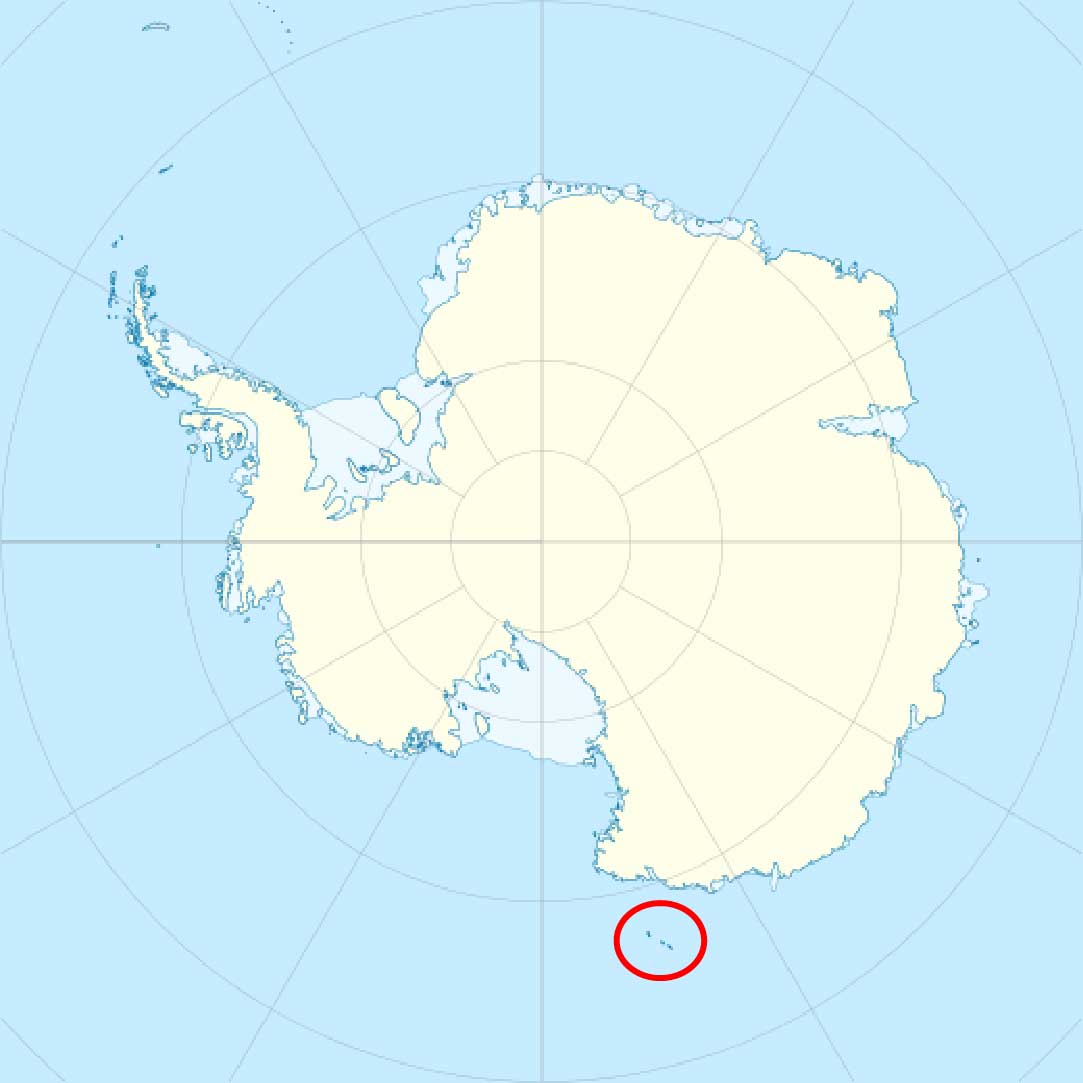 Location of the Balleny Islands in relation to Antarctica

The islands are rocky, covered by ice, and extremely difficult to access. In his 2007 book, Below the Convergence, author Alan Gurney describes the Balleny Islands as:

Girded and guarded by pack ice, shrouded in fogs, virtually inaccessible to any landing from the sea, they present an impregnable fortress face to the Southern Ocean. If Antarctica had a mythology, these bleak and unwelcoming islands would be the home of evil-spirited trolls, wicked goblins, hunchbacked warlocks, and malignant dwarves. There is no joy in them.

Borradaile Island is close to the Antarctic Circle, in the eight kilometer channel between Young and Buckle Islands. Buckle Island, Chinstrap Island and nearby Sabrina Island are home to colonies of Adélie and chinstrap penguins.

The English whaling captains John Balleny and Thomas Freeman first sighted the group of islands during 1839: Freeman was the first person to land on any of the islands on 9 February 1839, and it was the first landing south of the Antarctic Circle. The islands' area totals 400 km2 (154 sq mi) and the highest point has been measured as 1,705 m (5,594 ft) or approximately 1500m (5000 feet) (the unclimbed Brown Peak on Sturge Island). 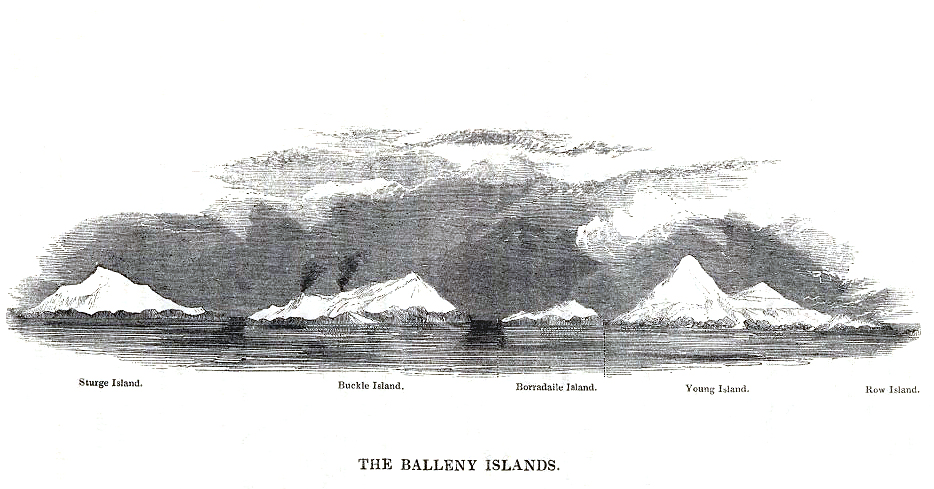 1839 etching of the Balleny Islands

In the archipelago, the Buckle, Sturge and Young Islands are examples of stratovolcanoes. Strong earthquakes very close to the islands are rare, but tremors of moderate strength do occur over the Pacific–Antarctic Ridge, Macquarie Triple Junction and Pacific Rim between the Balleny Islands and Macquarie Island. Other earthquakes occur near the Southeast Indian Ridge and Balleny Fracture Zone, including a magnitude 8.1 earthquake in 1998 that struck just over 700 km (430 mi) west-northwest of the Islands. 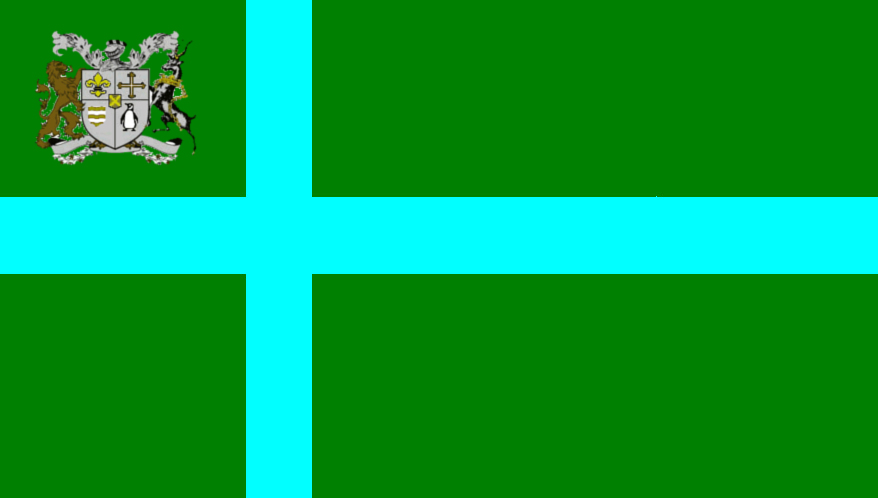 Flag of the Balleny Islands, created by the Duke of Sherman in 2005.

Jorge Fernandez Vidal learned about the Balleny Islands while researching unclaimed land in Antarctica. His intention was a find an area or region suitably outside the jurisdiction of other countries that could be used as a basis for minting coins of his own design.

Vidal settled on the Balleny Islands in March 2004, after closely examining the language used in the Antarctic Treaty and realizing that New Zealand's claim to the Balleny Islands could not be legally recognized by any nation, including their own. Therefore, it was highly unlikely New Zealand would ever mint coins for the islands on their own, and they were equally unlikely to assert any kind of legal jurisdiction if Vidal were to mint coins under the name of the Balleny Islands. In his own words, the islands were: “officially unclaimed. A beautiful free land to mint a coin.”

The Balleny Islands became a colony when Westarctica formally annexed it from New Zealand on 14 January 2005. Vidal was appointed its Governor, and following the first successful minting of the Balleny Islands coin, Vidal was given the title Count of Sturge.

Symbols of the Islands

Coat of arms of the Balleny Islands

Two symbols were created by the Governor of the Balleny Islands shortly after they were annexed by Westarctica: the coat of arms and the flag. The coat of arms features heraldic devices from Spain, France, and the region where Mr. Vidal was born, as well as an emperor penguin, the symbol of Westarctica.

The flag of the islands is the 2004 - 2008 flag of Westarctica with the colors reversed and the coat of arms of the Balleny Islands in the upper left quadrant in place of the crown of Westarctica.

In 2005, Inzander Berenku, from the Sultanate of Occussi-Ambeno requested permission to create stamps for the Balleny Islands. To assist in the creation of the stamps, Grand Duke Travis posed for a portrait and made it available for usage on the stamps. The stamps themselves each feature a different Westarctican animal along with a picture of the Grand Duke.

Although officially licensed by Westarctica, they are not considered to be part of the collection of official Westarctican postage stamps. These unusual, quasi-legal stamps can occasionally be found for sale by collectors online. 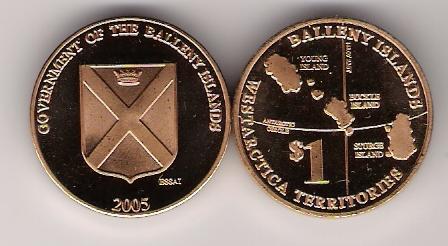 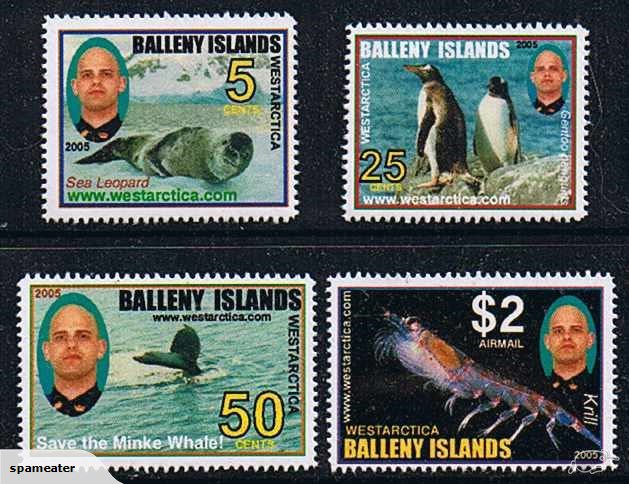 The collection of four stamps.
Retrieved from "https://www.westarctica.wiki/index.php?title=Balleny_Islands&oldid=8879"
Categories: