Logo of the Central Bank of Westarctica in 2006

The Central Bank of Westarctica is the organization tasked with designing and minting coins as well as paper currency for Westarctica on behalf of the central government. It existed as an official government institution headed by Jorge Fernandez Vidal from 2005 - 2010, when it was disbanded along with all other Grand Ducal ministries. However, it continued to mint coins in an unofficial capacity until 2013, when the last coins were released. Since then it has become the institution backing the production of Westarctica's paper currency, the 10 and 20 ice mark notes.

In late 2004, Jorge Fernandez Vidal stumbled upon the Westarctica.com website. He was intrigued by the fledgling nation and applied for citizenship. As part of his citizenship request, he shared his ideas for minting coins with Grand Duke Travis who at that time was looking for someone to lead a numismatic project to create coins on behalf of Westarctica. Vidal was promptly appointed to the post of Minister of the Treasury and given full authority to mint coins bearing Westarctica's name and symbols. The Central Bank of Westarctica was then created with Vidal as it's head officer. 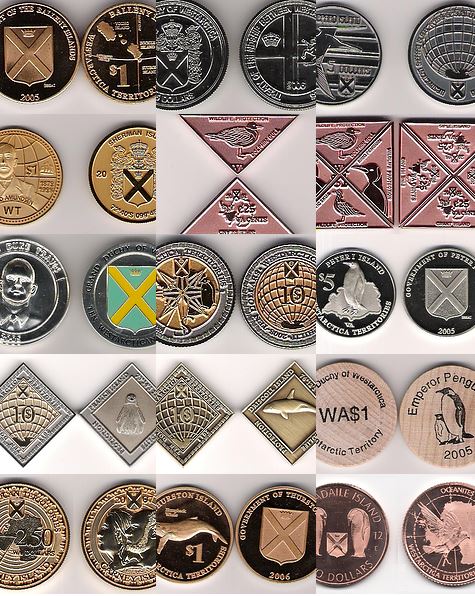 Collage of coins minted by the Central Bank

The initial arrangement between the Central Bank and the Grand Duke was that Vidal would assume all responsibility and cost associated with minting the coins, and would also reap 100% of the profits from the sale of any coins. The Grand Duke would be given three copies of every coin minted to be deposited in the Royal Collection. Management of the program and design of the coins would remain the sole responsibility of Vidal , while Grand Duke Travis' involvement was limited to some creative input and final approval of the coin designs.

The first coins were minted in 2005. Although the creation of paper notes was discussed, it was never pursued in a meaningful fashion.

During the reign of Grand Duke Philip (2006 - 2008), the powers of the Central Bank were expanded to include the Westarctican postal service and the creation of stamps, although no stamps were actually created during that time.

After the liberation of Calsahara by the Westarctican Royal Guards, the Central Bank became responsible for printing and managing Calsahara's banknotes, the Colonial Bulgur.

On 28 September 2018, the Central Bank was placed under the management of the Commissioner of the Treasury to facilitate the design and printing of ice marks, Westarctica's first paper money.