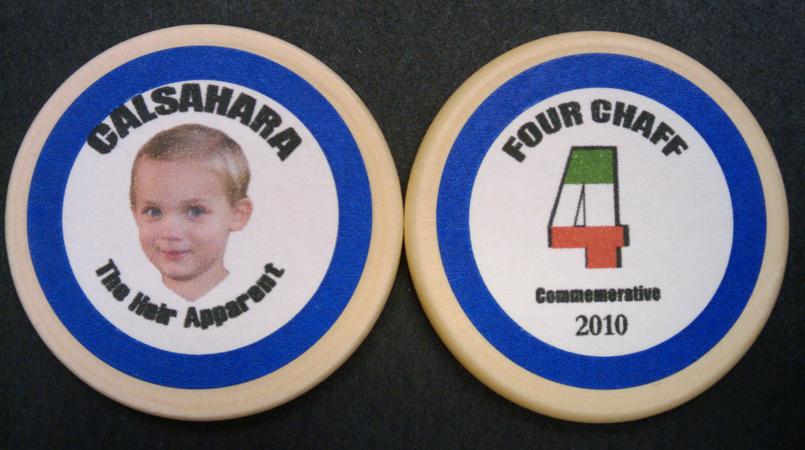 The Currency of Calsahara is the Colonial Bulgur, formerly the Calsaharan Bulgur. It was established by the Royal Bank of Calsahara in 2010 and is pegged to the value of grams of bulgur wheat, which grows wild and plentiful in the vast Carrizo Plain. Due to extreme inflation, the currency is printed in extremely high denominations, starting at 1 million bulgur and going as high as 100 million bulgur.

The average exchange rate of Bulgur to U.S. Dollars is 2 billion bulgur to 1 USD.

As a colony of Westarctica, the official currency of Calsahara is the Ice mark, however, the bulgur continues to be used locally. 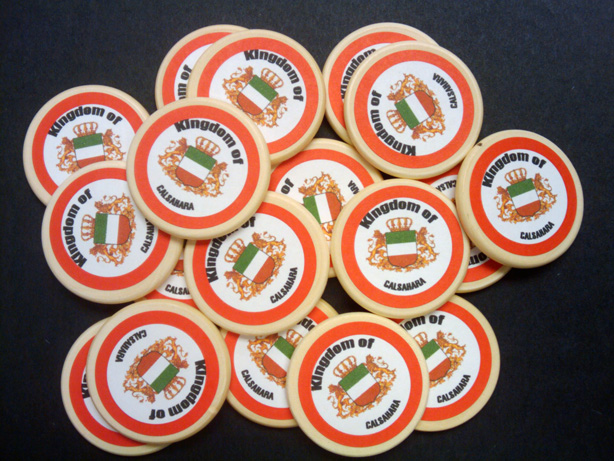 Each 1 million bulgur is worth 4 chaff, with a value of 250,000 bulgur each. The chaff coins were first minted in 2010 and consisted of a woodpaste composite with an overwhelming stench of glue. Despite the off-putting odor, they were extremely popular with collectors and the entire first run of coins sold out very quickly. The 1 chaff coins had the arms of Calsahara on the face and the numeric value "1" on the obverse.

Also in 2010, a series of three commemorative 4 chaff coins were minted. Each of these special issues had the portrait of a member of Calsahara's government on them: King Montague, the Heir Apparent, and Grand Chancellor Arledge. This special issue set sold out almost immediately. A set was sent to the Emperor of Atlantium for preservation in his Imperial Coin Collection. 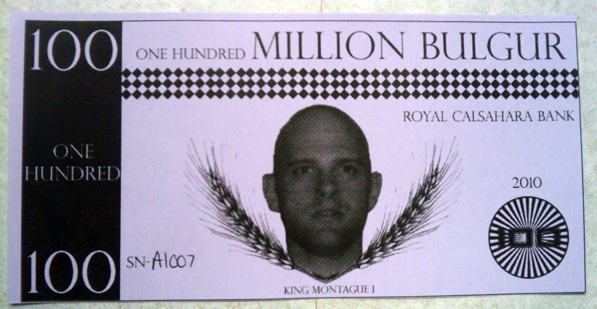 In 2010, the Royal Bank of Calsahara began printing Series A notes in denominations ranging from 1 million bulgur to 100 million bulgur. Each of these notes had a different portrait of King Montague, who ruled as King of Calsahara from 2009 - 2014.

The bulgur notes were printed on colored paper, each denomination was in a different color. Security features included hand-written serial numbers and a difficult-to-copy visual illusion seal in the lower right corner of the banknote. Budgetary constraints caused the notes to only have one side of printing, with the backs left blank.

Fate of the Series A banknotes

After the Westarctican Royal Guards liberated Calsahara from its negligent rulers, all the Series A banknotes in the government treasury were seized from Hooverville by Corporal Ciani and given to Grand Duke Travis. These were the first and last banknotes ever printed for the government of Calsahara. All the seized notes were sold to collectors the following year.

Shortly after Westarctica took control of Calsahara's territory, the Central Bank of Westarctica created a new series of banknotes for usage in the local Calsaharan economy. These notes used nearly identical designs as the original banknotes, but with updated portraits and slightly different language. No chaff coins have yet been minted as currency for the colony.