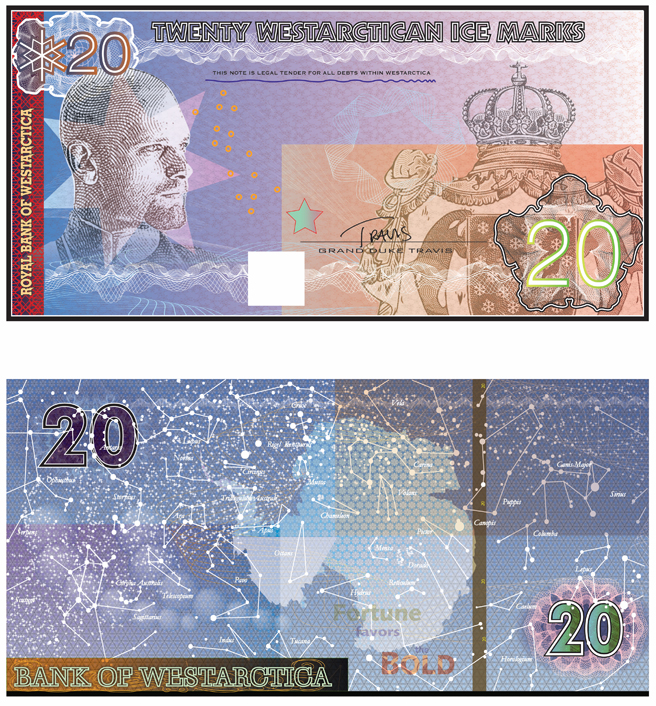 Early prototype design for the front and back of a 20 ice mark note.

The ice mark was originally planned to be a paper version of the Westarctican Dollar, which had previously only been produced in the form of metal coinage. Considering the great demand among collectors for paper currency, as well as the prestige brought from having high-quality banknotes, Grand Duke Travis created the office of Commissioner of the Treasury to manage the design and production process for the new notes.

The name "ice mark" was decided upon through a collaborative process during a meeting of the Royal Council in August 2018. Most ministers agreed that the "dollar" was a dated term linked heavily to American currency, and a different name would be help set apart Westarctica's banknotes as unique. His Lordship, the Count of Goldstream, proposed the name and it was swiftly approved by the council. The Baron of Bastanchury subsequently created the first note which then quickly passed ducal approval and was printed.

Printing of Westarctica's ice marks falls under the authority of the Central Bank of Westarctica, which is currently headed by the Grand Duke and managed by the Commissioner of the Treasury on behalf of the Crown. 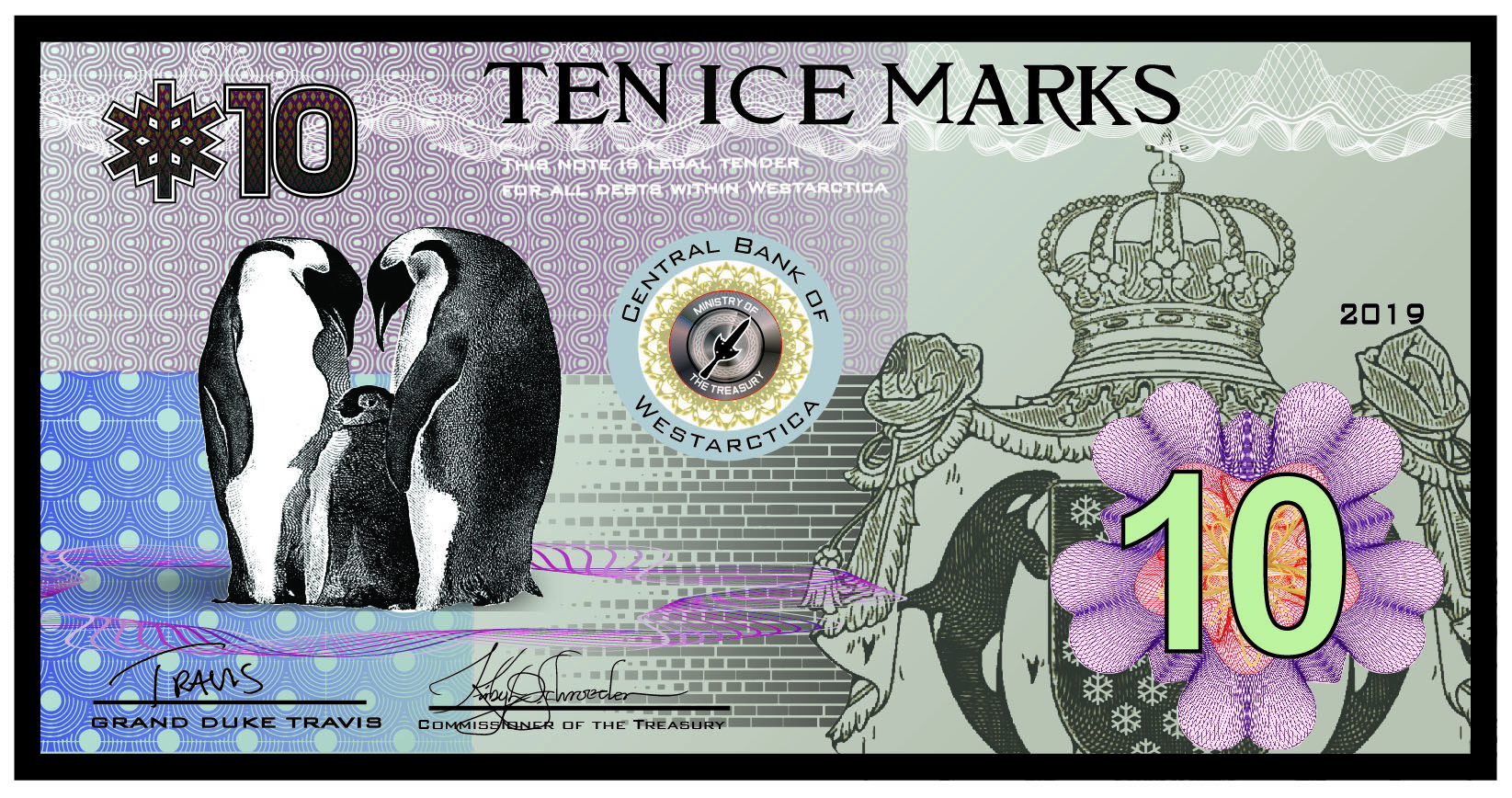 An ice mark note issued by the Central Bank of Westarctica has a number of security features and each note has a unique serial number printed on its front in two places. This serial number is a unique identifier which is composed of four elements which are separated by hyphens. The first number is a four-digit number that indicates the denomination of the note. All four spaces in this number must be occupied: the value itself will be right-aligned, and any unused spaces are filled with the number zero. Thus, a 20 ice mark note always has a complete serial number that begins with 0020.

Next comes a set of alphanumeric codes corresponding to that bill’s unique serial number within its denomination series year (see below), and is separated from the next two elements by a hyphen (-). It always contains seven numerical digits, and may or may not be followed by a serial letter code.

If any two notes end up for any reason carrying the same note serial number, then this set of numbers will be immediately followed by a letter indicating the note belongs to a different set of serial numbers; since note serial numbers are not issued sequentially and do not correspond to any "order of printing" of such notes, the number of possible serial numbers does not need to be exhausted in order for a serial number letter code to be needed on a note.

Following the second block number is one or more digits corresponding to the series year that the bill was first issued (though not the calendar number of that year itself)— for example, the first 20 ice mark note issued in 2019 (the first series year for the 20 ice mark note) will have an Arabic numeral 1 here, as will all other 20 ice mark notes issued in 2020, 2021, 2022, etc. However, if a new distinct series is created in any subsequent year (which could be 2019, 2020, 2030, or any year number), then that series will be coded with the next higher number in the sequence (i.e., 2, 3, etc.). There is no upper limit to this number. All bills within a given series year will have the same basic visual format (arrangement of elements, use of colors and emblems) as other notes of that series year, regardless of when that note was actually printed. If there is a major revision of a bill at a later date, this will invoke a new series year code rather than simply a new series code (see below). The series year code will always be followed by a hyphen.

Following the series year is a final letter block indicating the note’s series code for that series year. This letter (or, potentially, letters, typically A-Z) corresponds to a minor variation for that note within its series year, and may be arbitrarily and non-sequentially chosen within the 26-letter Roman alphabet.

All notes that follow the format and appearance of the original series year will have the same letter code(s) in this field; if the Bank of Westarctica decides to issue a different kind of note within the same series year, then that note will bear a different letter(s) here. Only if more than 26 such series letters become necessary for a given series year will the field contain two letters (e.g., “FR” or “AG” or any other two-letter code). There is no upper limit to the length of the series code which a note may bear, so long as each series note is identical in all aspects of its appearance (other than its unique serial number) to other notes in the same series year and can be clearly differentiated from other notes in different series.