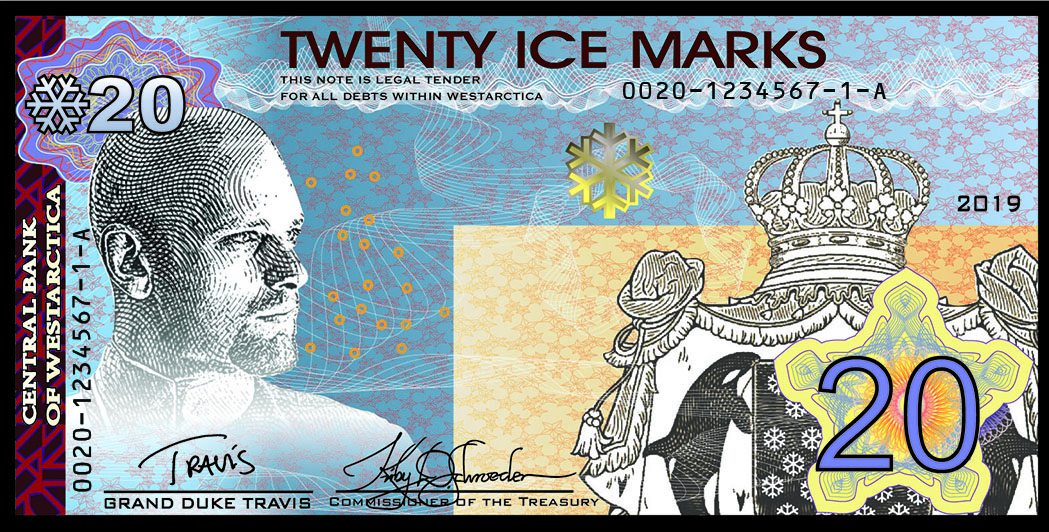 The 20 ice mark note is the first denomination of ice marks to be issued by the Central Bank of Westarctica. As such, it is the first legal tender paper currency ever created by Westarctica. The initial release of the banknotes occurred on 27 February 2019. 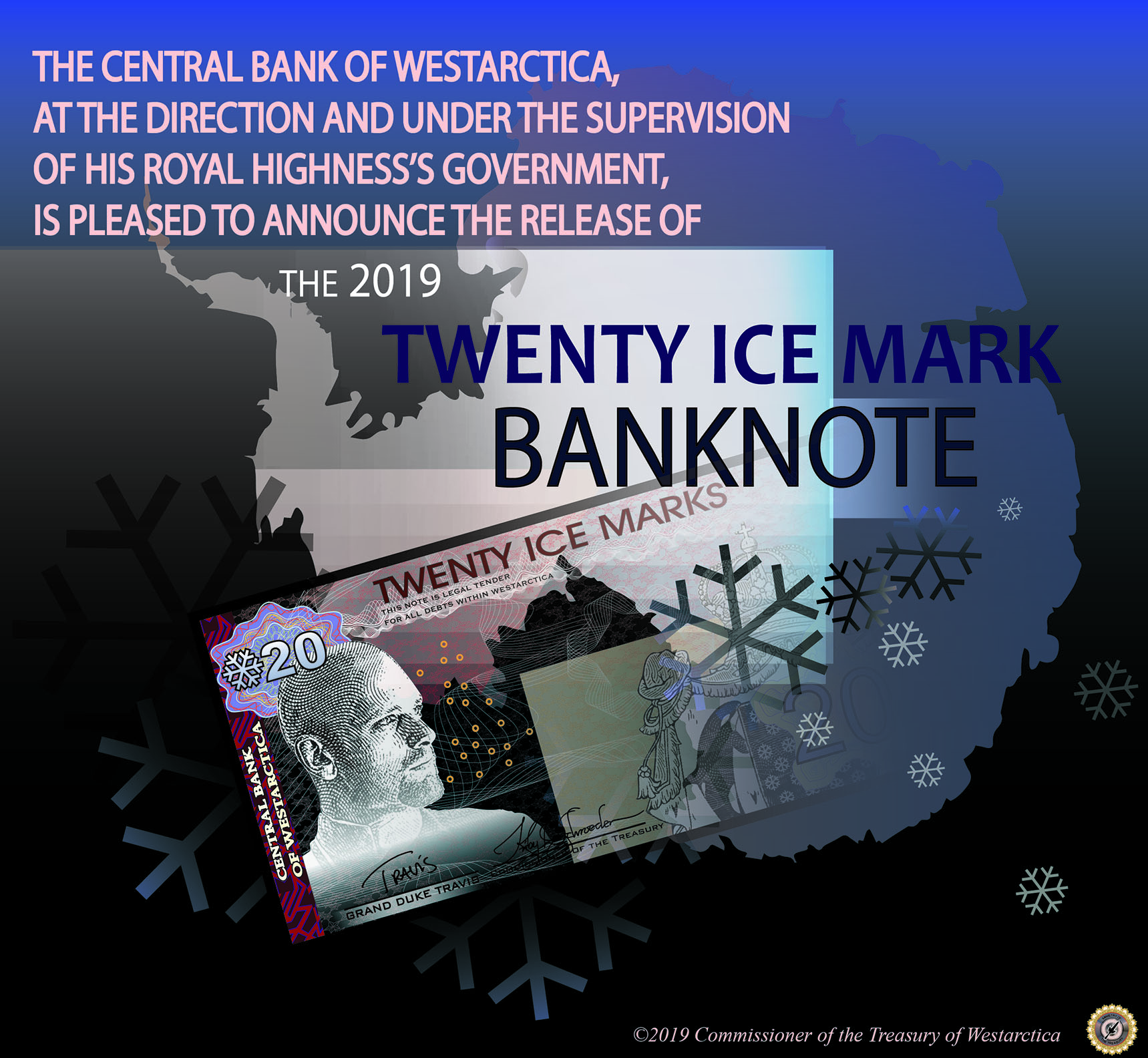 February 2019 release poster for the note

The note was designed by the Baron of Bastanchury in his capacity as Commissioner of the Treasury. There was significant debate about backing the ice marks with some real commodity, such as silver, but this was ultimately rejected as financially unfeasible. The notes were made available for the public to purchase 28 February 2019.

The 20 ice mark note is 70 mm x 140 mm in size (2.75 in x 5.5 in). It is printed on 75% cotton rag, 25% linen paper, the same fiber content as that of American banknotes. It contains red and blue fibers, has a weight of 85 GSM (grams per square meter) making it only slightly more dense/ heavy that typical office copy paper, and has no optical brighteners. Although the paper itself is waterproof and acid-free, the toner/ ink used for the production of the notes on this paper may be dissolved or damaged using certain aprotic solvents. Devoid of the toner/ ink, however, the paper has neither commercial nor symbolic/ economic value.

The obverse (i.e., front face) of the note has an engraved rendering of Grand Duke Travis on its left side. Above/ Superior to this appears the symbol for "ice mark" (the snowflake) followed by the horizontal unrotated number "20", both superficial to an ovoid guilloche pattern which itself appears deep to the portrait of the Grand Duke. Inferior to/ Beneath the face of the Grand Duke appear his signature and the signature of the Commissioner of the Treasury, both unrotated and horizontal. The issuing bank, the Central Bank of Westarctica, appears in horizontal text rotated 90° counterclockwise just to the left of these. To the right of these along the top of the note are the horizontal words "This note is legal tender for all debts within Westarctica" vertically inferior to the words "Twenty Ice Marks" in larger font. Inferior to both of these is a series of orange Eurion symbols. Near the top right of the note is the note's unique serial number directly above/ superior to an engraved rendering of the Lesser Shield. The same serial number occurs rotated counterclockwise 90° along the left side of the note just to the left of the Grand Duke's portrait. A 5-point stylized guilloche "star" is printed superficial to the Shield on the note's lower right quadrant, and the number "20" is printed superficial of and centered within the star. On the far right of the note in the middle in black font and in horizontal unrotated text is the year of printing of the note. A guilloche pattern of white lines appear as an interwoven border across the top of the note and other white guilloche swirls appear across its face. A faint background pattern of 5-pointed stars appears across the entire note on the obverse face behind all other elements.

Under the correct UV light, the number "20" in the upper left of the note appears prominent and white compared to the rest of the obverse face of the note. Also, the yellow guilloche star in the lower right shows a prominent yellow border (see below).

Near the center-right of the note, just above the midline, is a metallic gold foil snowflake. This element renders the note almost impervious to counterfeiting (also see below). 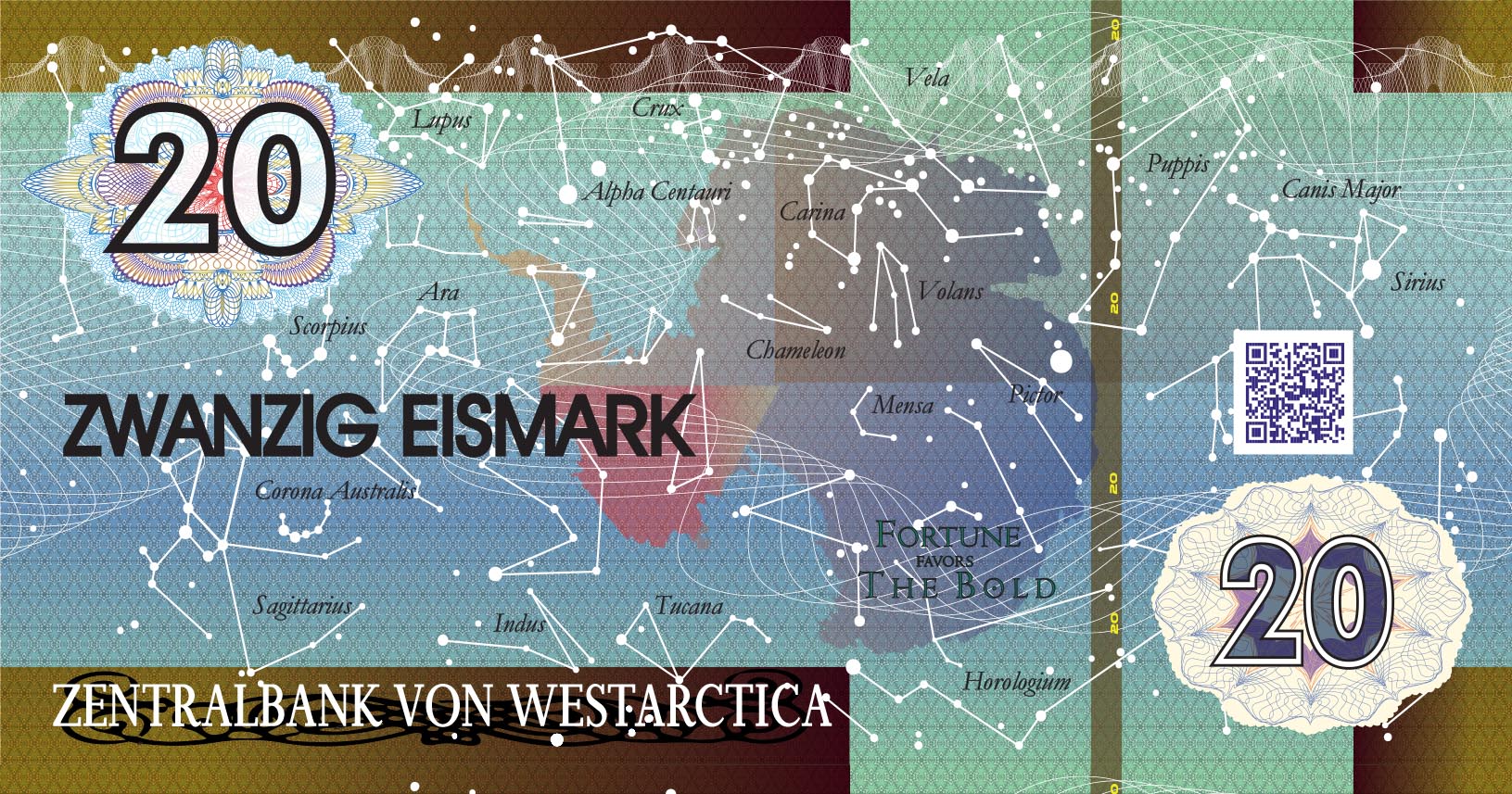 The reverse (back) of the note is dominated by a star chart of the southern hemisphere showing most of its prominent stars and asterisms. In the top left is a stylized "20" in front of a very complex guilloche pattern. Below/ inferior to this is the German denomination of the note, "Zwanzig Eismark", above the name of the Central Bank in German: "Zentralbank von Westarctica". Further right is a silhouette of the continent of Antarctica with the Westarctican wedge highlighted. Just below and to the right of the geometric center of the note appear the words "Fortune Favors the Bold", the country's motto. To the right of this is a dark vertical strip containing a series of very small yellow "20"s oriented horizontally and rotated 90° counterclockwise. To the right of this in the lower corner is another "20" superficial to another guilloche pattern. A faint snowflake pattern occurs across the entire reverse of the note.

The right side also features a QR code box which links to this article on the Encyclopedia Westarctica.

Multiple overlapping color gradients are located across the obverse and reverse of the note, and interact with each other using various undisclosed layered transparency effects, making the recreation of the final set of gradients impossible without specific information with regard to the colors chosen for each gradient, the opacity of each color, the opacity of each layer, the transparency effect of each layer relative to all layers beneath it, and knowledge with regard to the order of all layers.

The production of each note involves a series of steps.

The 20 ice mark note is duplex printed in color by an ImageRUNNER Advance C5540i at 1200-dpi print resolution in a sheet of six.

The original print run does not include serial numbers. These must be added during a second print run on a separate black-and-white laser printer. 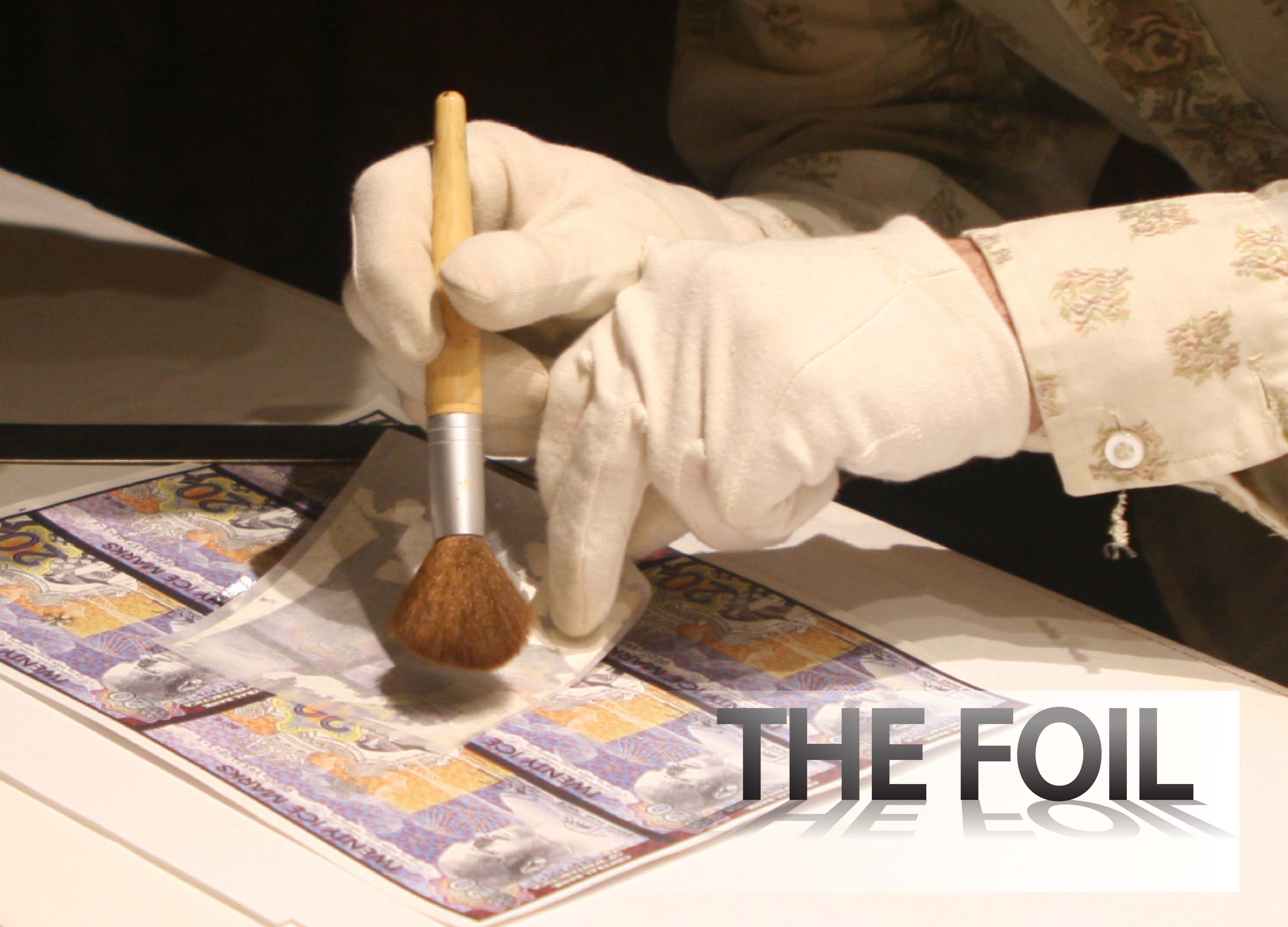 The note's most impressive feature is the metallic foil snowflake that appears on the face. These are created by first spraying an adhesive through a template on each note, allowing the adhesive to dry briefly, removing the template, placing a sheet of foil on top of the remaining adhesive, and removing the excess foil with a brush. After this, each snowflake must be treated with a sealant to allow it to retain its shine into the indefinite future. The sealant requires at least 24 hours to dry properly. 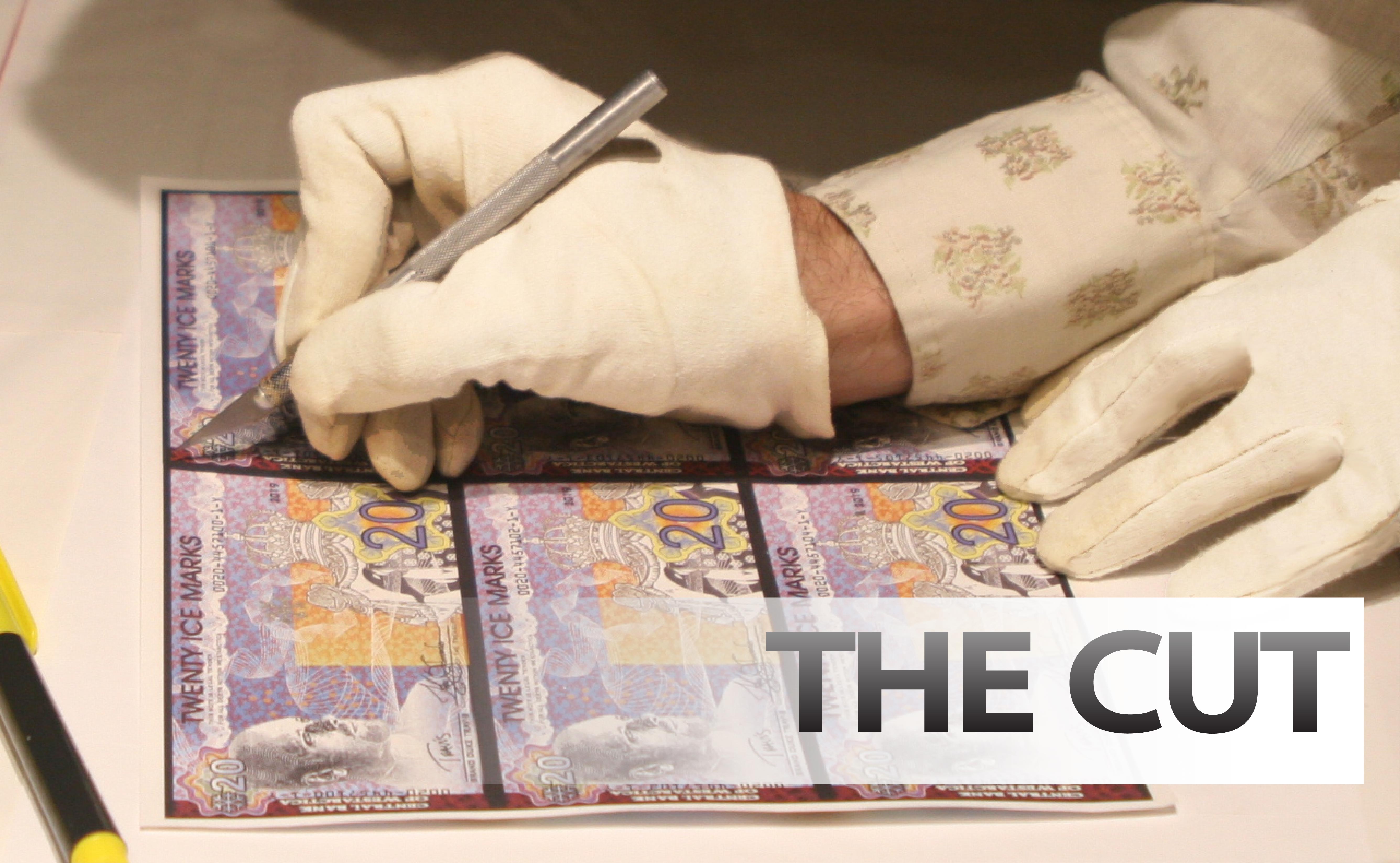 Following printing, each note must be cut from from the sheet, and all sheets have a border, meaning that no fewer than nine cuts are necessary to fully separate a sheet of six notes.

Each note receives three ink treatments. The first is a permanent black ink edging which removes the white paper edge produced by the cut. The second is the application of UV responsive ink to the number 20 in the upper left of the obverse face. The third is an edging around the star in the note's lower right obverse. Both become evident when illuminated by a black light. 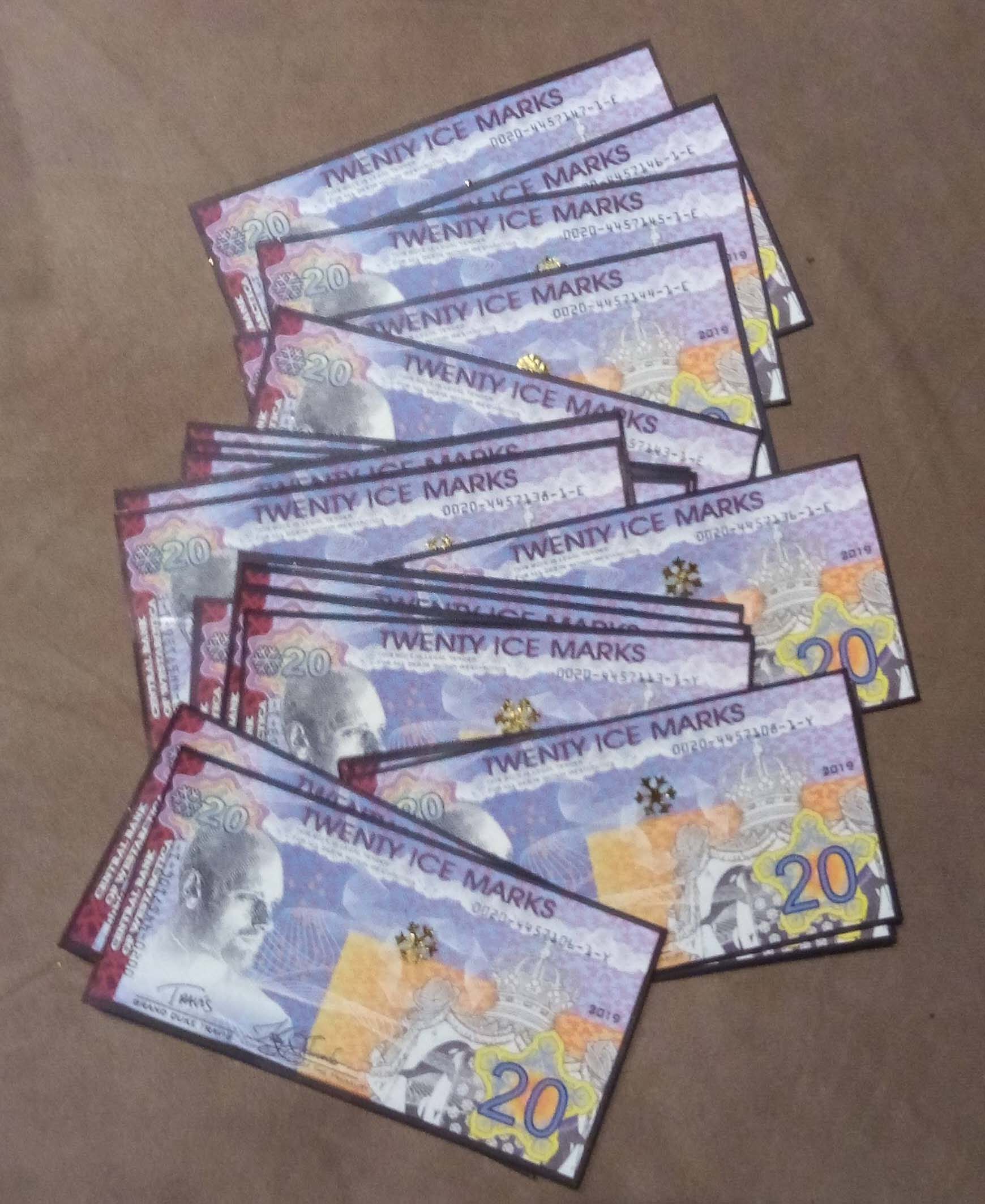 A set of notes

Once a set of notes has been given serials and has been foiled, cut, and inked, the notes are checked to insure the correctness of their serials and to verify the appearance and placement of all other elements. Notes which for any reason do not meet the high standards of the Treasury Commission are rejected and their serials recorded. Each note is dusted with velvet to remove the excess foil flakes from their surfaces. The notes are then bundled and delivered to the Grand Duke for distribution to the public.