The Liberation of Calsahara (known in Calsahara as the Invasion of Calsahara) occurred on 29 October 2017, when a coalition force formed by Westarctica and its ally the Kingdom of Shiloh invaded and conquered Calsahara, a sovereign micronation located on the Carrizo Plain of California. As a result of the successful military operation, Calsahara became a colony of Westarctica.

Liberation Day is celebrated as a public holiday on 29 October.

The Realm of Calsahara was a 120-acre micronation located near the tiny community of California Valley, California, just north of the Carrizo Plain National Monument, a protected natural area of the United States. It existed as an independent country starting 24 November 2009 and was ruled by various leaders, but at the time of the invasion, the monarch was King Nicholas, who had not visited his nation since 2011.

Calsahara had much in common with Westarctica: it is remote, uninhabited, has a hostile climate, and nobody seems to care too much about it. The territory is also home to 13 endangered species including the giant kangaroo rat, the San Joaquin kit fox, and the California condor.

After watching Calsahara's government slowly fall into inactivity over the course of 2017, Grand Duke Travis decided to liberate the nation from its non-resident leadership, and claim the area on behalf of Westarctica. In this way, he would take full responsibility for the continued preservation and protection of the vast uninhabited area. 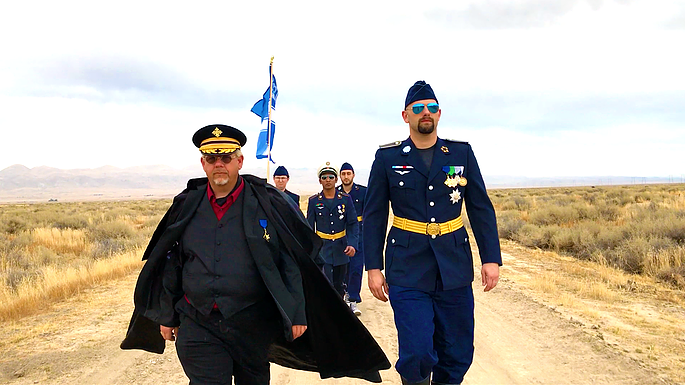 The coalition forces marching to Hooverville

Stage One: Planning and Arrival

10:00am: Grand Duke Travis assembled the coalition forces for a planning session at the Grand Ducal Apartment in Los Angeles.

12:00pm: The coalition forces departed Los Angeles in two Nissan Pathfinders and drove due north on the California 5 Freeway before taking Route 58 to arrive in Calsahara.

2:45pm: The coalition forces arrived at the border separating Calsahara from the United States. Grand Duke Travis and King Timothy inspected the troops before the Grand Duke gave an inspirational speech and ordered the army to cross the Seven Seas of Rhye to begin the invasion. He was heard to remark: “Once we pass this border, we are pilgrims in an unholy land.”

2:50pm: The coalition forces arrived in the Calsaharan capital of Otisburg and found it undefended and uninhabited, the Calsaharan military having fled earlier at the approach of the invading army. After a quick scouting sortie, the Grand Duke and King Timothy led the army to Montague Square where they promptly lowered the flag of Calsahara and raised the flag of Westarctica. Grand Duke Travis then presented the captured colors of Calsahara as spoils of war to King Timothy in thanks for his nation's participation.

3:00pm: Westarctica's command tent was established in Otisburg and photographer Matt Roth documented the activities of the Royal Guards as they secured the capital city and prepared for the march on Hooverville.

3:15pm: With the flag of Westarctica held aloft, Grand Duke Travis and King Timothy led the Royal Guards on a triumphant march through the streets of Calsahara toward the dilapidated city of Hooverville. 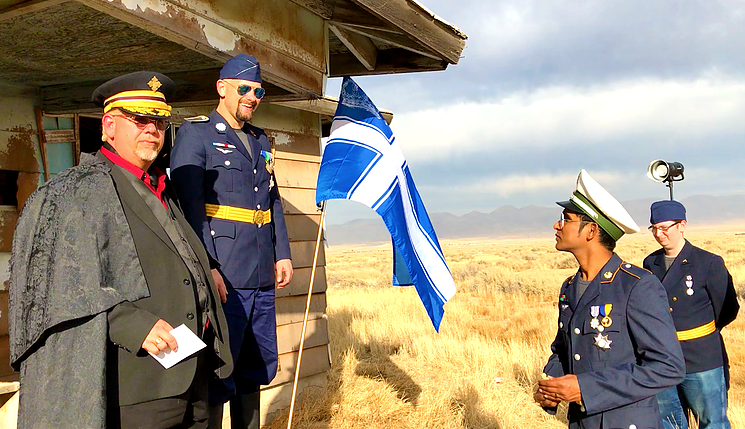 3:30pm: The coalition forces arrived in Hooverville and planted the Westarctican flag in a hole in the front porch. From the steps of the crumbling building, the Grand Duke ordered his soldiers to secure the perimeter and locate the national treasury of Calsahara as well as the seal of Calsahara.

Once both were recovered, His Royal Highness distributed the plundered funds to the invasion team and proclaimed victory over the defeated forces of Calsahara.

4:30pm: After a return march to Otisburg, Grand Duke Travis bestowed Knighthoods on members of the coalition. Corporal Green was made a Knight of the Desert Heart, Matt Roth and Princess Samantha were made Knight/Dame Commanders in the Order of the Snowflake, King Timothy was made Knight Grand Cross in the Order of the Snowflake, and Corporal Ciani was promoted to the office of Captain-General of Calsahara.

5:00pm: Following the awards ceremony, a treaty table was erected in Hooverville where Grand Duke Travis and Captain-General Ciani signed the Article of Eternal Union that brought an end to the conflict and formalized Calsahara's status as a colonial possession of Westarctica.

5:15pm: As the sun hung low in the west over the Caliente Mountain Range, the Royal Guards were given permission to relax their uniforms and enjoy a victory celebration. Many champagne and sparkling cider toasts were made to the Commander-in-Chief and the Vice-Commander and there were discussions about the future uses Westarctica might have for its new colony.

6:00pm: The coalition forces packed up their command post and loaded all personnel and equipment into the Pathfinders and departed Calsahara to return to Los Angeles, victors of the day.