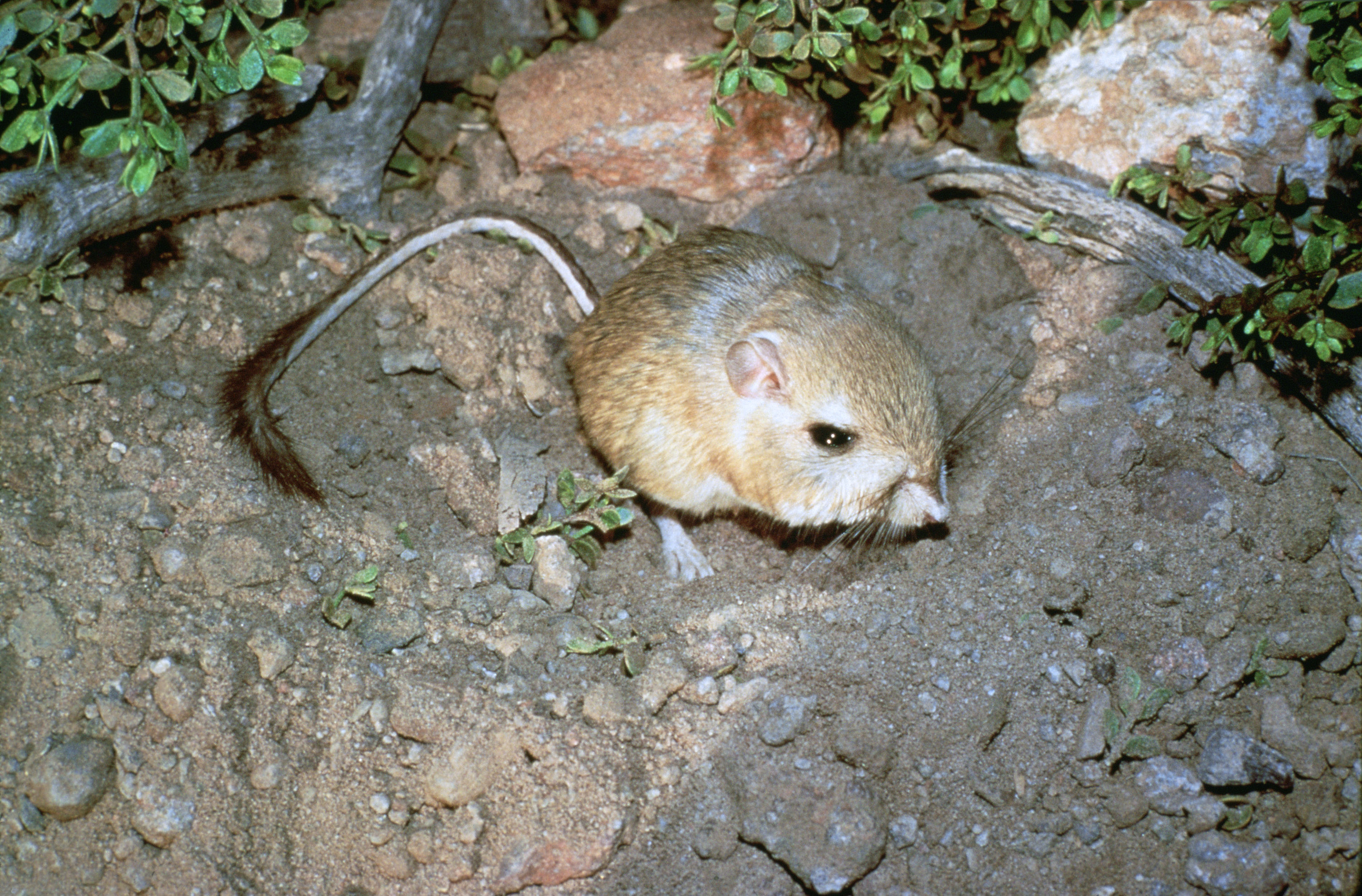 The giant kangaroo rat (Dipodomys ingens) is an endangered species of heteromyid rodent endemic to Calsahara and nearby areas of the United States.

The giant kangaroo rat is the largest of over 20 species of kangaroo rat which are small members of the rodent family, measuring about 15 cm in length, including its long, tufted tail. It is tan or brown in color. Like other kangaroo rats it has a large head and large eyes, and long, strong hind legs with which help it move at high speeds.

The giant kangaroo rat has been recently added to the endangered species list due to its habitat being severely reduced. Data was collected on its foraging behavior and social structure. Traps baited kangaroo rats with oats in them for four weeks in the summer. The animals were captured, tagged with tracking devices and set free. Results show that significantly fewer males were captured. This could have been due to the time of year at which the experiment was tested. Females were found to be more social. Studies also showed that the kangaroo rat’s den is the area in which the animal spends the most time.

The giant kangaroo rat lives on dry, sandy grassland and digs burrows in loose soil. It lives in colonies, and the individuals communicate with each other by drumming their feet on the ground. These foot thumping signals range from single, short thumps to long, drawn out “footrolls” that can average over 100 drums at 18 drums per second. These audible signals serve both as a warning of approaching danger, as a territorial communication, and to communicate mating status. 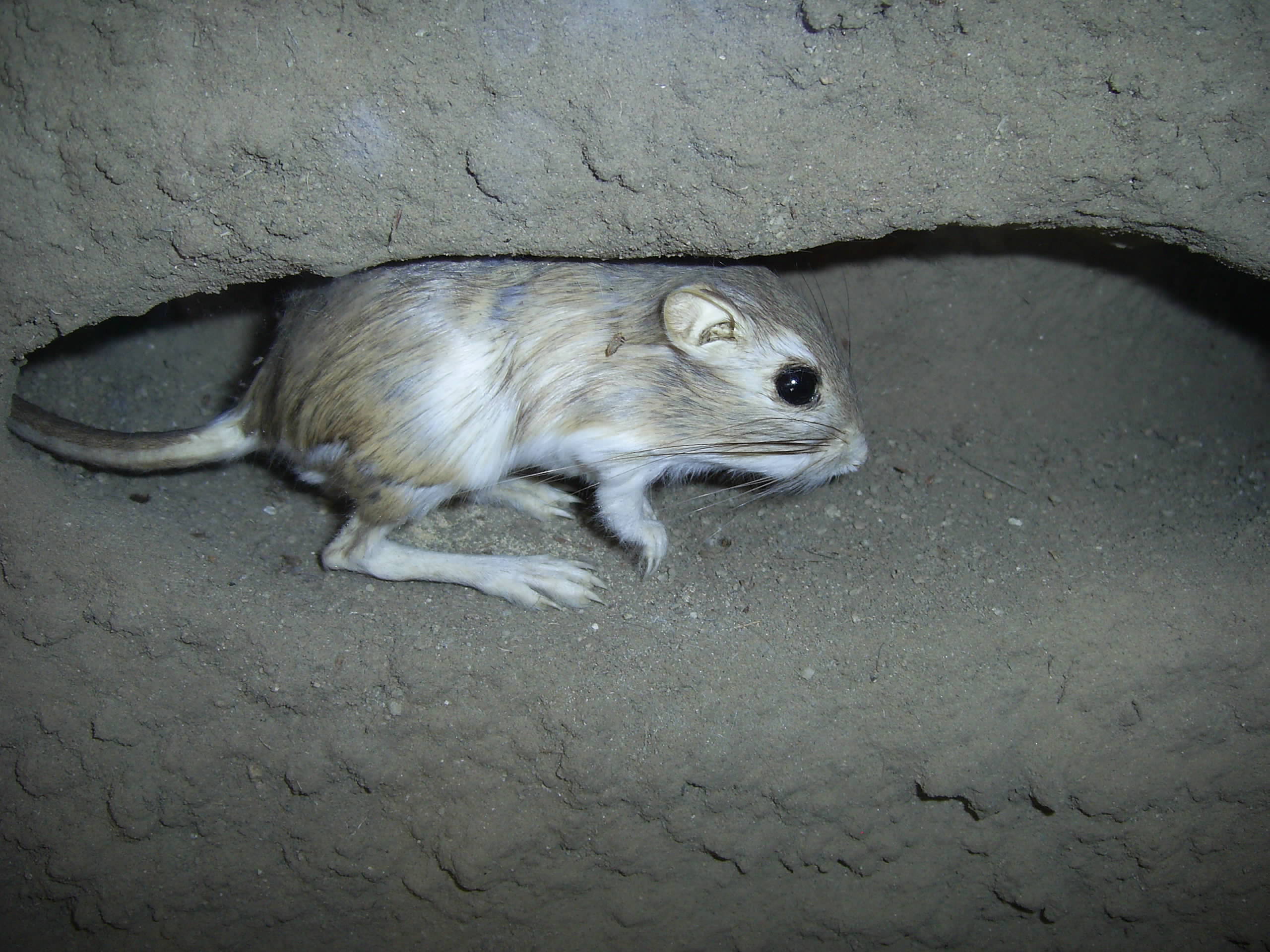 A taxidermy display of of a Giant Kangaroo Rat in its den.

The mating of the giant kangaroo rat is seasonal. During the summer, males go out of their normal territories and mate with neighboring females. During the winter, the males stay in their original burrow.

Kangaroo rats are primarily seed eaters, but also eat green plants and insects. Most giant kangaroo rats gather seeds when they are available and store them for consumption later. The seeds are put into small pits on the surface of the soil and scattered over the home range of the individual. The small pits only the content of the two cheek pouches.

In the spring and summer, individuals generally spend less than two hours of the night foraging above ground. They are very territorial and never leave their den for more than 15 minutes per day. The giant kangaroo rat then stores the seeds in a larder for later eating and gives birth to a litter of 1 to 7 babies, with an average of 3 per litter. It communicates with potential mates by sandbathing, where the giant kangaroo rat rubs its sides in sand, leaving behind a scent to attract mates. Lifespan is 2–4 years.

This species was declared endangered on both the federal and California state levels in the 1980s. It inhabits less than a mere 2% of its original range and can now be found only in isolated areas west of the San Joaquin Valley, including the Carrizo Plain, the Elkhorn Plain, and the Kettleman Hills. The giant kangaroo rat, like many other rodent species, lost much of its habitat as the Central Valley fell under agricultural use. Much information still needs to be obtained regarding their basic biology and compatibility with various land uses before clear directives can be made.

Besides some projects currently underway in the Carrizo Plain National Monument, studies need to be conducted on populations whose range overlaps with private lands. Recovery of the giant kangaroo rat can be achieved when the three largest populations in eastern Kern County, Carrizo Plain Natural Area, and the Panoche Region along with the populations in the Kettleman Hills, San Juan Creek Valley and Cuyama Valley are protected and managed appropriately.