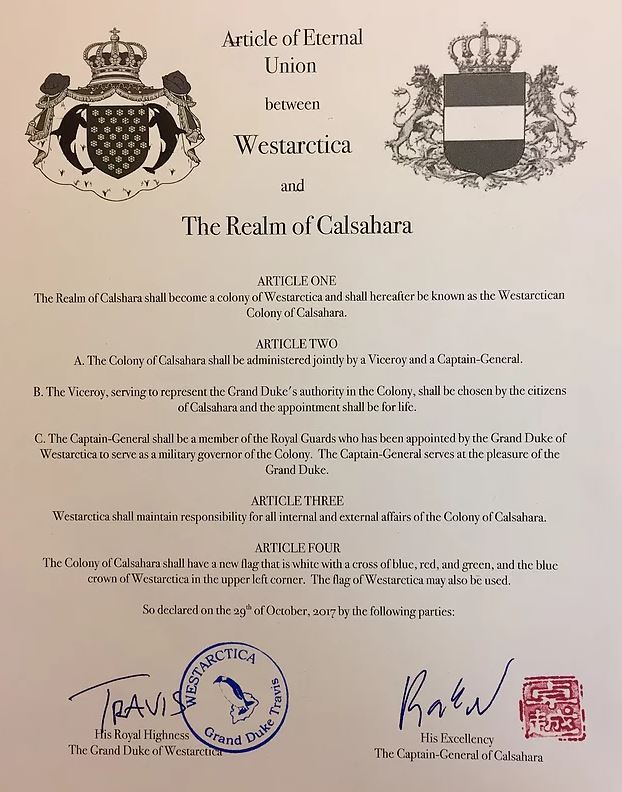 The Article of Eternal Union

The Article of Eternal Union is the 2017 treaty that ended hostilities between Westarctica and Calsahara and made Calsahara a colony of Westarctica.

When the Westarctican Royal Guards were preparing to liberate Calsahara from its negligent rulers, Grand Duke Travis foresaw the necessity of having a concrete way of ending the hostilities between the two nations once the fighting was concluded. He wrote the Article of Eternal Union as a legal document that would make Calsahara a colony of Westarctica forever. At the time it was written, it was not yet known if Westarctica's forces would prevail, or who would fill the role as Captain-General of Calsahara once the conflict was over. Two copies of the treaty were carried in the command vehicle for safe keeping.

Prior to being conquered by Westarctica, Calsahara had a loose legal system known as "The Will of the People." In practice, however, the King of Calsahara ruled by decree. While many of these decrees were made in the best interest of the people, but many were not and resulted in unduly harsh punishments for minor offenses. For example, citizens faced the death penalty for doing math problems, anyone wearing sandals risked having their feet chopped off, and offending the king, could result in being horsewhipped.

Grand Duke Travis abolished all forms of capital punishment, swept away the authoritarian decrees, and laid down a new law of the land as enshrined in the Article of Eternal Union. This treaty serves as the legal basis for Westarctica's possession of the Colony of Calsahara and has laid the groundwork for a bright, shining future on the barren Carrizo Plain. Combined with the Charter of the Colonial Estates, which governs the management of the Colonial Estates of Calsahara, these two documents are the supreme law of the land in the colony.

The Articles were signed by on behalf of Westarctica by Grand Duke Travis and on behalf of Calsahara by Captain-General Ciani, who had been appointed military governor of the colony only minutes prior. The treaty was signed in Otisburg at a table of peace erected and presided over by King Timothy of Shiloh as a third-party observer to ensure the legality of the process.