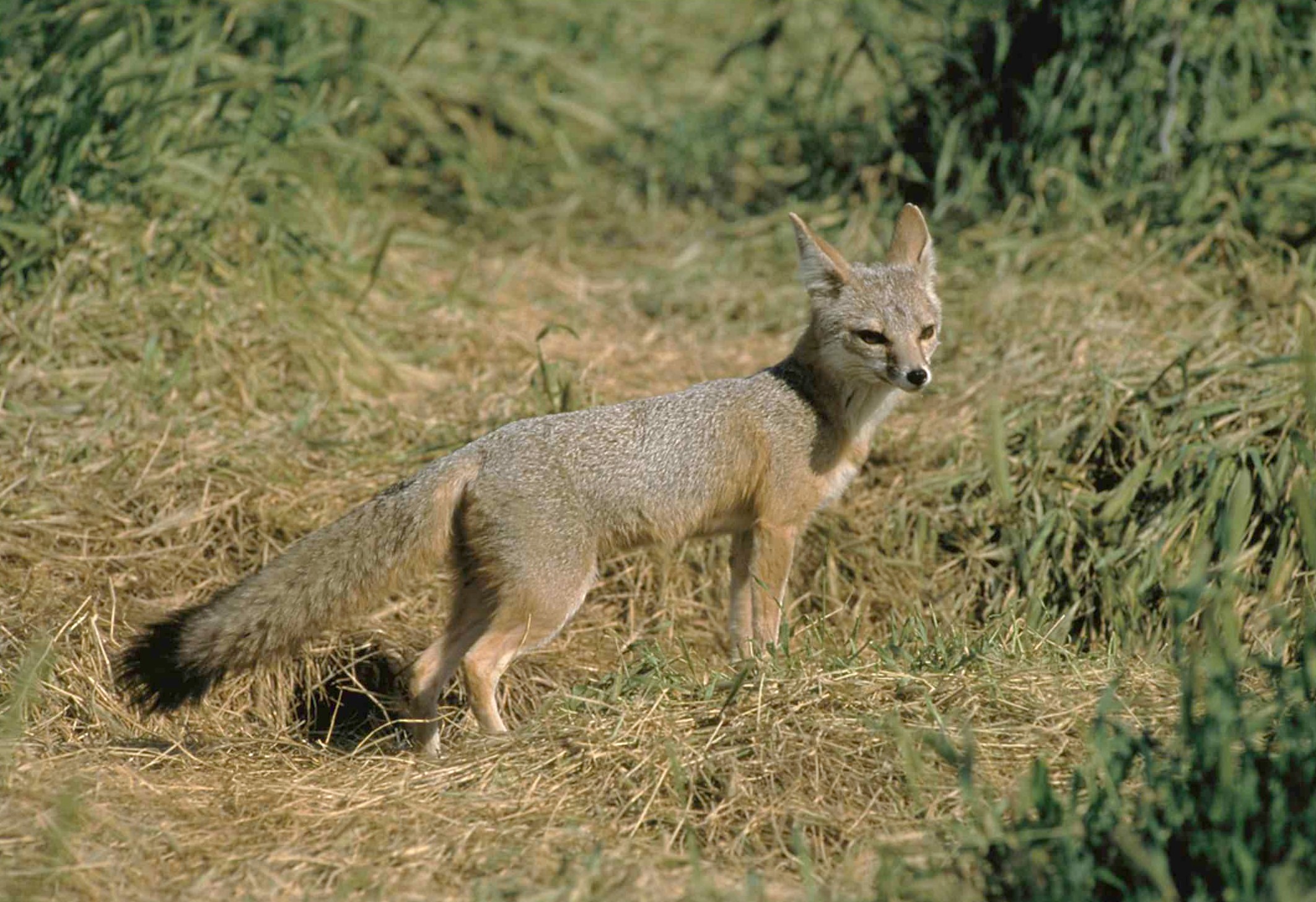 The San Joaquin kit fox (Vulpes macrotis mutica) is the smallest member of the dog family in North America and one of several endangered species that lives within the borders of the Colony of Calsahara. In 1990, its population was estimated to be 7,000. This subspecies is still endangered, after nearly 50 years of being on the Endangered Species List.

The average male San Joaquin kit fox measures about 32 inches in length (of which 12 inches is the length of its tail). It stands 12 inches high at the shoulder, and weighs about 5 pounds. The female is a little smaller.

Its foot pads are small and distinct from other canids in its range, averaging 1.2 inches long and 1 inch wide. The legs are long, the body slim, and the large ears are set close together. The nose is slim and pointed. The tail, typically carried low and straight, tapers slightly toward its distinct black tip. The coat colors of San Joaquin kit foxes vary by range and season.

Their summer coats are tan and the winter coats are greyed. The colors will actually range from buff, tan, and yellowish-grey to grizzled. Black guard hairs contribute to the grizzled appearance. The body undersides vary from buff to white. The external ear flap is dark on the back sides while the ear’s forward-inner border and base has distinct white hairs. 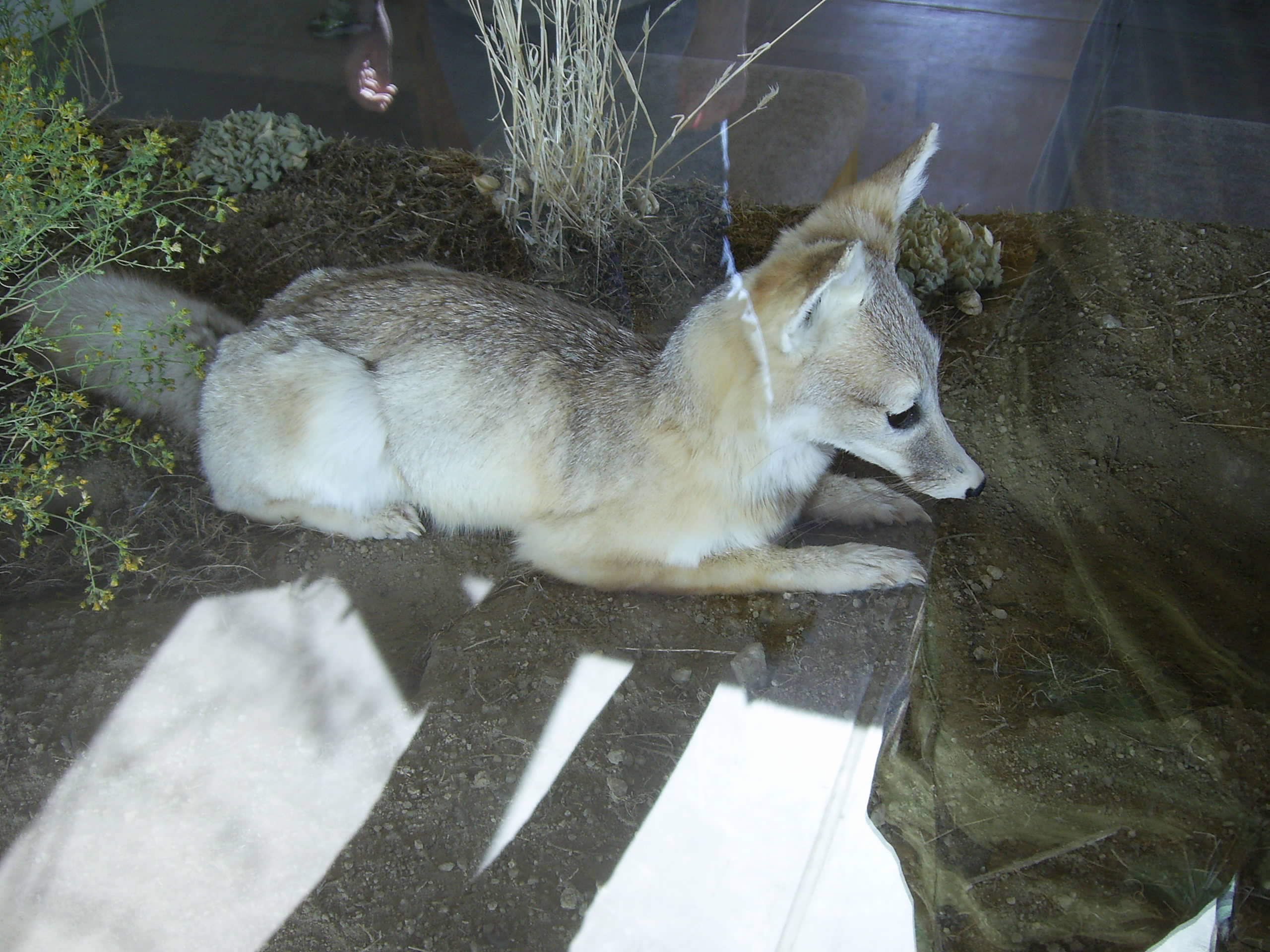 Because the San Joaquin kit fox requires dens for shelter, protection and reproduction, a habitat’s soil type is important. Loose-textured soils are preferable, but modification of the burrows of other animals facilitates denning in other soil types. San Joaquin kit foxes can use more than 60 different dens over the course of a year in an effort to evade predators, like coyotes.

San Joaquin kit foxes can breed at one year of age. The male and female may stay together the full year but may not necessarily den together. Home ranges vary from 1 to 12 square miles. Each kit fox may use several dens in a season and change dens often. In September and October, the female focuses on preparing the pupping den. Mating can occur from December to March, and the pups will be born after a 48-52 day gestation period. The male will provide most of the female’s food while she is lactating. The pups venture outside of their den for the first time when they are a little more than a month old.

Though the San Joaquin kit fox is nocturnal, the pups may play just outside their den in the late afternoon. When 4-5 months old they disperse. On occasion offspring of either sex may remain to assist in the rearing of next year’s litter.

Historically, this kit fox was widely distributed throughout grassland, scrubland and wetland communities in the San Joaquin Valley and adjacent low foothills, but agricultural, urban and industrial development in the Valley has led to extensive and continuing loss of native habitat. Today, much of the kit fox's remaining habitat is extremely fragmented, movement corridors are degraded or blocked, and only a few large areas of native grasslands remain on the San Joaquin Valley's perimeter in the Carrizo Plain.

The San Joaquin kit fox was listed as an endangered species by the U.S. federal government in 1967 and was listed by the state of California four years later. Since then, the fox was included in a 1998 recovery plan for upland San Joaquin Valley, in which it was described as an “umbrella species” — meaning efforts to save the fox's habitat will benefit other native plants and animals.

In August 2010, the Center petitioned the U.S. Fish and Wildlife Service to designate critical habitat for the San Joaquin kit fox, but this has still not been done.

Besides habitat loss, the San Joaquin kit fox is threatened by pesticides expelled through intensive agricultural use, by industrial and infrastructure projects, and in residential areas along the Carrizo Plain. Kit foxes' small-mammal prey base has been significantly reduced by rodenticides, which not only kill kit foxes' prey, but can also kill kit foxes when they build up in the foxes' bodies.