The stamps of Westarctica are the collection of commemorative stamps that have been issued by the central government of Westarctica. These stamps feature images of prominent Westarcticans as well as symbols of the nation and the flora and fauna found in Western Antarctica.

Each set of stamps is printed in a limited amount and once the inventory of stamps have been sold, no more are created for that year, although there may be some partial reuse of designs in subsequent years.

Postage stamps were first created on 1 April 2005 and were released to the public by the central government on 20 April 2005 with the 80¢ Royal Wedding Stamp created to celebrate the wedding of Grand Duke Travis and the Marquise of Walgreen (the future Grand Duchess Cathryn). The denomination of 80¢ was selected because 80¢ was the cost of mailing a standard 8 1/2 x 11 envelope through the U.S. postal system. In this way, the commemorative Westarctican stamp could be placed beside the 80¢ U.S. stamp and both would be canceled together.

The second stamp issued by Westarctica was the 37¢ Peter I Island Stamp featuring a picture of Prince Ashton Roman, the Viceroy of Peter I Island, and a map of the island itself. As this was the first stamp ever issued by any country on behalf of the island, the Grand Duke hoped it would help secure Westarctica's claim to the island. At the time the stamps were released, the standard cost of a first class letter in the U.S. was 37¢.

Westarctica's third set of stamps were the $1.60 Penguin Stamps issued as a series of four, each with an image of a different penguin on them. Two featured the Adélie penguin and two featured the emperor penguin. These proved massively popular with collectors and the entire inventory was sold out in a matter of weeks. The denomination was chosen because the standard cost of international shipping for an 8 1/2 x 11 envelope was $1.60 through the U.S. postal system.

After the release of the Penguin Stamps, no further stamps were released by the government until Grand Duke Travis returned to the throne. 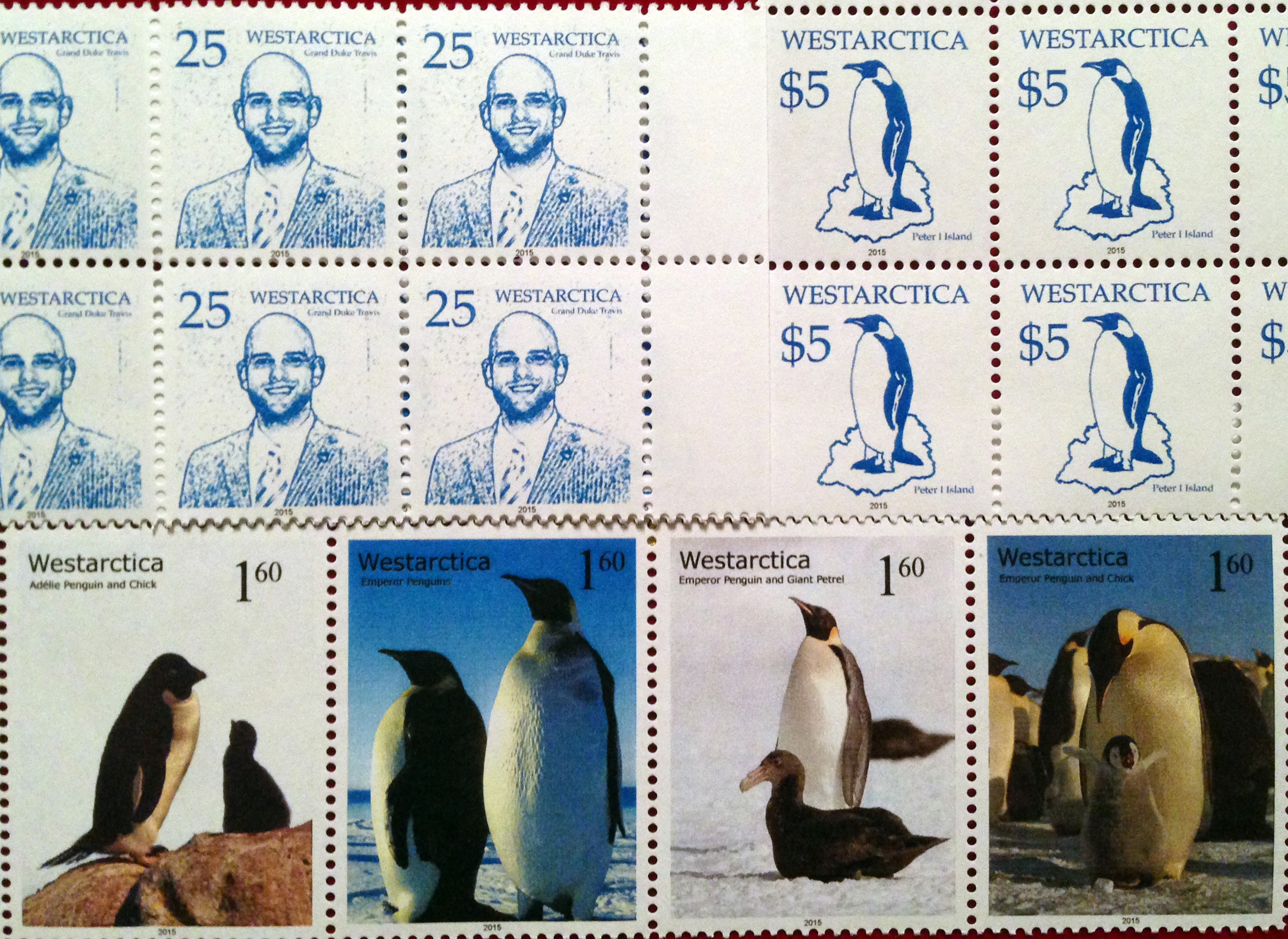 The 25¢ Grand Duke Travis Stamp reused the image and general format found on the 15¢ Calsahara Stamp released in 2010 while the Grand Duke was King of Calsahara. This stamp was probably the least popular and least sought-after stamp ever issued by the government.

The $1.60 Penguin Stamps were a semi-reissue of the 2005 Penguin Stamps in that they still featured four images of penguins, but there was one Adélie penguin image removed and replaced with an additional image of an emperor penguin. These stamps, unlike the 2005 stamps, also included the year of issue in microprinting on the lower margin of the stamp. 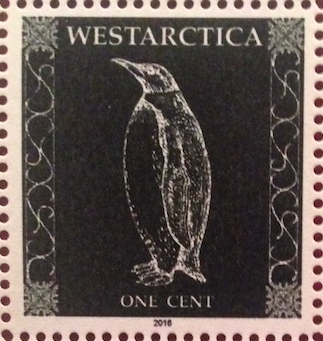 2016 marked the first year more than three series of stamps were issued. On 2 March 2016, the following sets were issued:

The 1¢ Penny Black was intentionally created to be an ugly stamp with a similar design as the 1840 Penny Black issued by the United Kingdom as the world's first adhesive stamp. In place of Queen Victoria's portrait, Westarctica's Penny Black has a woodcut of an emperor penguin.

The $1 Antarctic Explorers Stamps were a set of four stamps, each with the image of a different Antarctic explorer. Where possible, images were sourced showing the explorer in an Antarctic environment.

For the first time in Westarctica's history, a dual Westarctican/Molossian stamp was issued to celebrate the 10 year anniversary of the signing of the Treaty of Friendship and Recognition with the Republic of Molossia. Although the treaty was actually signed in 2005, the anniversary was initially overlooked, so the stamp was released the following year. These stamps are either branded with the name and denomination of Westarctica (80¢) or with the Molossian Valora.

The first series of stamps issued in 2018 were:

The second series of stamps issued in 2018 were: 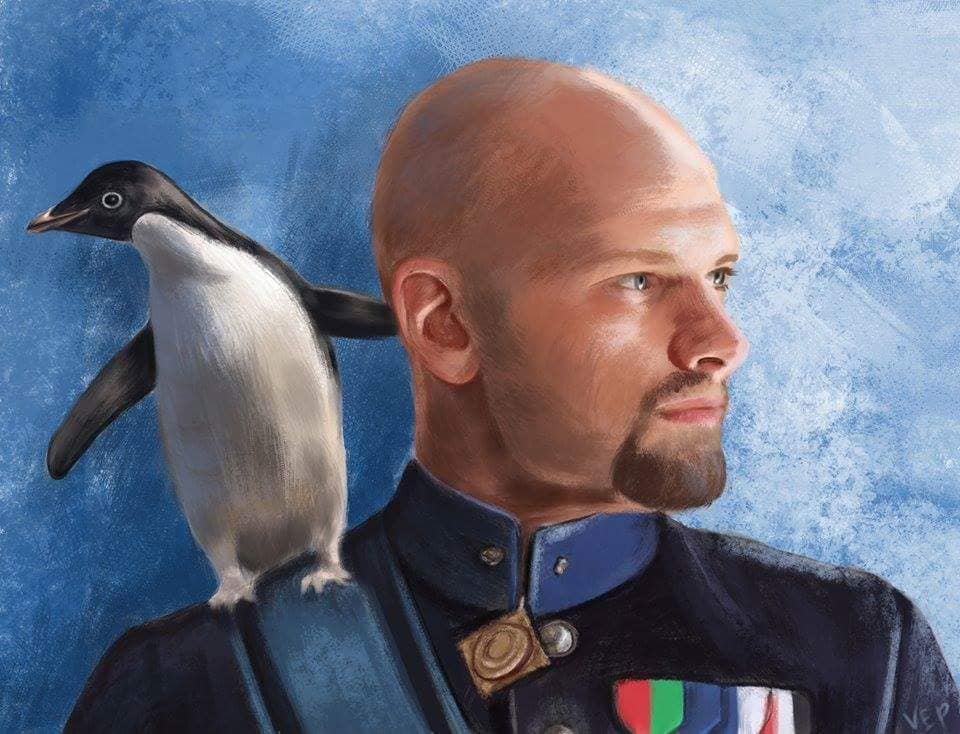 2019 marked the first time that Westarctica's stamps were printed in denominations of Ice marks instead of the Westarctican dollar. Two of the stamp designs were selected to celebrate the artists of Westarctica, in particular, the winning entry in the 2018 Westarctica Art Expo.

The series of stamps issued in 2019 were:

The series of stamps issued in 2020 were:

In late 2005, stamps for the Balleny Islands were privately printed by Inzander Berenku, from the Sultanate of Occussi-Ambeno. These stamps are considered authorized, but unofficial.

While the stamps are designed by Grand Duke Travis, since 2005, they have been printed by Jurgen Schwarz of Yourstamps.eu.