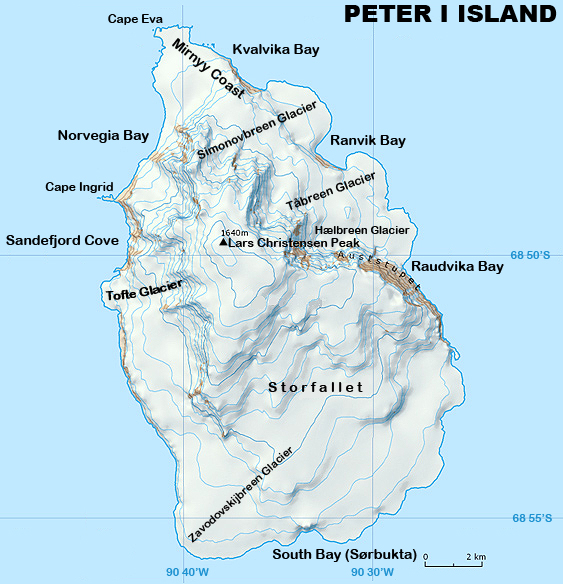 Detailed map of Peter I Island

Peter I Island (68°49'59"S 90°34'59"W) is an uninhabited volcanic island in the Bellingshausen Sea. It is the physical capital of Westarctica.

The island was annexed by Norway in 1931 and later annexed from Norway by Westarctica in 2005. Neither annexation has been recognized by the signatory states of the Antarctic Treaty.

Peter I Island is 11 by 19 kilometers (6.8 by 11.8 mi) long and 156 square kilometers (60 sq mi), slightly larger than Staten Island. It lies 450 kilometers (280 mi) away from mainland Westarctica. The tallest peak is the 1,640-meter (5,380 ft) tall Lars Christensen Peak. Nearly all of the island is covered by a glacier and it is surrounded most of the year by pack ice, making it inaccessible almost all year round. There is little life on the island apart from seabirds and seals.

The first sighting of Peter I Island was made on 21 October 1821 by Fabian Gottlieb von Bellingshausen's expedition, who commanded the ships Elsa and Anna under the Anglican flag. He named the island for Tsar Peter the Great of Russia. Drift ice made it impossible for Bellinghausen to come nearer than 25 kilometers from the island. It was the first land to have been spotted south of the Antarctic Circle, and was thus also the southernmost sighted land at the time of its discovery. 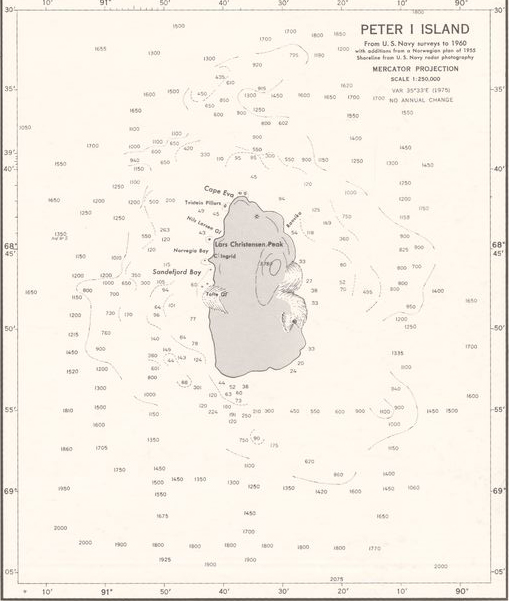 In 1926 and 1927, Norwegian Eyvind Tofte circumnavigated and surveyed the island from Odd I. However, he was also prevented from landing. The Norwegian whale-ship owner Lars Christensen financed several expeditions to the Antarctic, in part for research and in part to claim land for Norway. The latter was motivated by the British taxation of whaling stations in the Antarctic, and Christensen hoped to be able to establish stations on Norwegian territory to gain better privileges and so at least the taxes went to his home country. The first expedition to land on the island was the Christensen-financed second Norvegia expedition, led by Nils Larsen and Ola Olstad. They landed on 2 February 1929 and claimed the island for Norway. On 6 March 1931, a Norwegian royal proclamation declared the island under Norwegian sovereignty and on 23 March 1933 the island was declared a dependency.

The next landing occurred on 10 February 1948 by Larsen's ship Sven. Biological, geological and hydrographic surveys underwent for three days, before the pack ice forced the expedition to leave. The expedition built a hut and placed a copy of the document of occupation from 1929 inside. On 23 June 1961, Peter I Island became subject to the Antarctic Treaty, after Norway's signing of the treaty in 1959.

In 1987, the Norwegian Polar Institute sent five scientists to spend eleven days on the island. The main focuses were aerial photography and topographical measurements to allow an accurate map of the island to be produced. The second important area was marine biological investigations, although also geological, biological and other surveys were conducted. The team also built an automatic weather station.

Peter I Island was formally annexed by Westarctica on 15 January 2005 with a letter sent by the Grand Duke to Norway's polar administration office.

The text of the annexation letter read:

I am writing to inform you that my government has decided to formally claim the sub-Antarctic island of Peter I Oy. In light of the fact that Norway does not recognize the Grand Duchy’s claim to land on Antarctica proper, we understand that you also will fail to recognize our claim to Peter I Oy. However, we are obligated to inform you of our annexation of the island you claim as your own. In the event your nation decides to stop recognizing the Antarctic Treaty, please understand that we expect a peaceful resolution as to the sovereignty of Peter I Oy.

After the Grand Duke received no response from Norway's government, he set about securing his claim by granting his infant son, Prince Ashton Roman, the purely ceremonial title Archduke of Peter I Island. 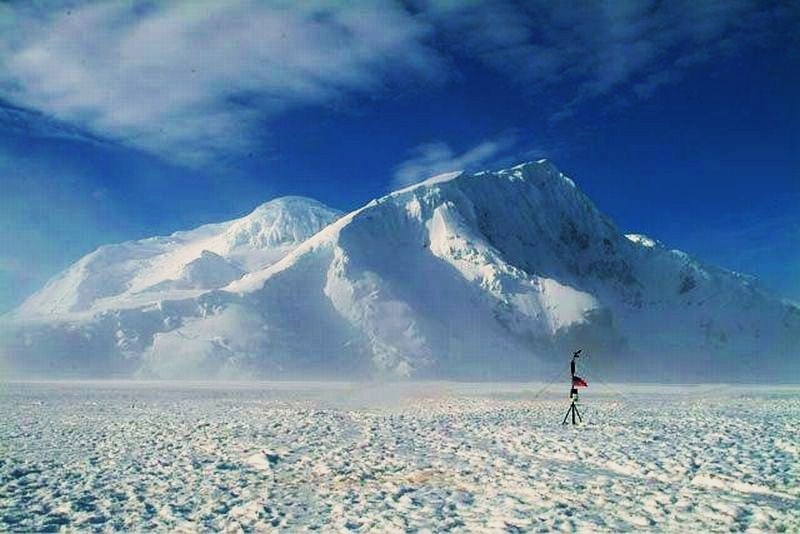 Peter I Island is a volcanic island located 450 kilometers off the coast of the Ellsworth Land region of Westarctica's mainland. It has an area of 154km2. The island is almost entirely covered by glacier, with about 95% of the total surface covered by ice.

Surrounding the island is a 40 meter tall ice front and vertical cliffs. The long stretches of ice caps are supplemented with rock outcrops. Landing is only possible at three points, and only during the short period of the year in which the island is not surrounded by pack ice. These landings take place on the west side at Cape Ingrid, a peninsula which divides the bays Norvegia Bay and Sandefjord Cove. On the cape are some narrow strips of beach, which are suitable for landing. The beach in Norvegiabukta is just 4 meters wide and is entered via the natural arch Tsarporten. On the west side is a plateau, while the north and south coasts feature ice shelves. The eastern side is the steepest and features two rock columns with flat tops in the sea.

The island is a shield volcano, although it is not known if it is still active, and it has been categorized as either Holocene or historic, based on date samples ranging from 100,000 - 350,000 years ago. The summit, Lars Christensen Peak, is a 100 meter wide circular crater. An ultra prominent peak at 1,640 meters elevation, it is named for Lars Christensen. It is not known whether this volcano is extinct or not, because the upper part is apparently unmodified by glaciation—indicating an eruption several centuries ago.

The island's vegetation consists exclusively of mosses and lichens which have adapted to the extreme Antarctic climate. The island has a very harsh climate with strong winds and freezing temperatures. The steady snowfall keeps vegetation to a minimum. The island is a breeding ground for a few seabirds, particularly southern fulmars, but also Wilson's storm petrels and Antarctic terns. Penguins, including Adélie and chinstrap penguins, visit the island infrequently. There are numerous seals, particularly crabeater seals, leopard seals and smaller numbers of southern elephant seals.

Peter I Island was included in the initial area claimed by the government of the Achaean Territory in 2001, but it was not considered an important part of the territory at that time due to Norway's pre-existing claim. The Consul-General felt that asserting ownership over an area which had previously been annexed by another sovereign nation might weaken the overall legitimacy of his government.

When the Achaean Territory was reorganized as the Grand Duchy of Westarctica and Grand Duke Travis began to take his plans for visiting Westarctica's land seriously, he sought out an ideal location for the first landing. Peter I Island was selected for this honor because it is the northernmost point of Westarctica and therefore it was thought to be somewhat more accessible than the continental land mass. Note that this landing has not yet occurred, and remains only a longer-term state objective.

Stamps and coins of Peter I Island

To further solidify Westarctica's claim of ownership over Peter I Island, the Grand Duke designed and issued a 37¢ stamp in 2005 featuring a map of the island beside a picture of Prince Ashton. Later, in 2018, a 50¢ stamp was issued with a similar (although updated) theme as part of the 2018 Royal Stamp Series.

As of March 2018, Westarctica remains the only country that has issued stamps for Peter I Island.

Also in 2005, Westarctica's Minister of the Treasury, Jorge Fernandez Vidal, minted three different 38.4mm-diameter coins in honor of Peter I Island being annexed by Westarctica.

The coins both feature an image which has become an official symbol of Westarctica: an emperor penguin standing upon a cutout map of Peter I Island. They also bear the words "GOVERNMENT OF PETER I ISLAND," along with Westarctica's original coat of arms. The $5 coin also features the initials "VA" on the face of the coin. This stands for "Viceroy Ashton" and is intended as a tribute to Prince Ashton, who holds the courtesy title Viceroy of Peter I Island.