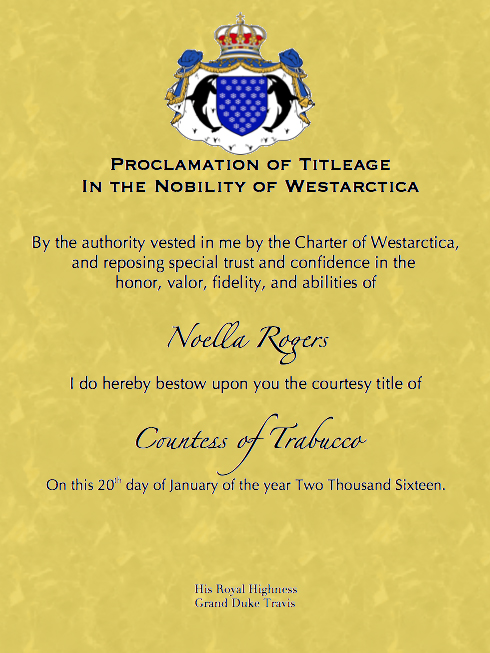 In the Peerage of Westarctica, a Courtesy title is a title that is not hereditary, is granted directly from the Grand Duke, and is given as a sometimes temporary privilege to a single individual.

The usage of Courtesy titles has been prevalent throughout the history of Westarctica. The Grand Duke most frequently grants courtesy titles to the spouses or children of hereditary peers who have obtained their titles through Letters Patent.

Other examples of Courtesy titles currently in use include:

Similar to a Life Peerage in the United Kingdom, a Courtesy title would not pass to the heirs of the holder upon their death.

As opposed to the Letters Patent of the peerage, which are strictly regulated, the regulation and management of Courtesy titles is far more lax. The majority of Courtesy titles do not grant the holder any special privileges or rank within the Order of Precedence in Westarctica, therefore, many of the names and titles of the holders not even recorded in a central register.

Courtesy titles are traditionally granted on a piece of golden parchment paper bearing the arms of Westarctica at the top. The seal of Westarctica is stamped in wax directly on the paper as opposed to sealing ribbons linked through the paper (as on Letters Patent).

Starting in 2017, Grand Duke Travis began issuing Courtesy titles on the same blue parchment as the certificates for the Order of the Snowflake, although both forms of parchment are considered valid.

Courtesy Title vs. Proclamation of Titleage

Courtesy Titles should not be confused with Proclamations of Titleage. Although the two appear very similar and both are issued directly by the Grand Duke without formal Letters Patent, there are still important differences: