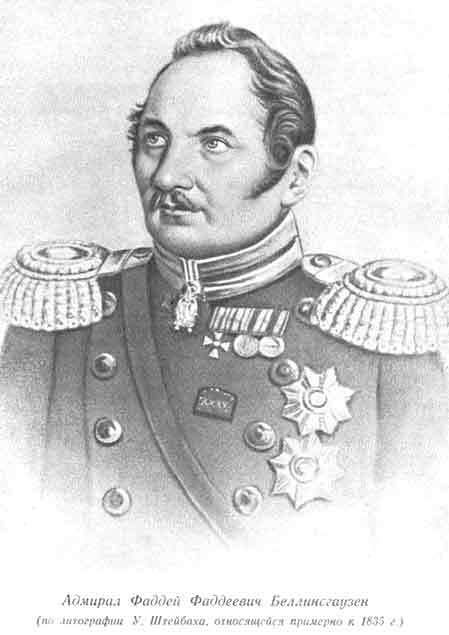 Fabian Gottlieb Thaddeus von Bellingshausen (20 September 1778 – 25 January 1852), a Russian officer of Baltic German descent in the Imperial Russian Navy, cartographer and explorer, ultimately rose to the rank of Admiral. He participated in the first Russian circumnavigation of the globe and subsequently became a leader of another circumnavigation expedition which discovered the continent of Antarctica.

Life in the Imperial Russian Navy

Bellingshausen started his service in the Baltic Fleet, and after distinguishing himself joined the First Russian circumnavigation of the Earth in 1803-1806, serving on the merchant ship Nadezhda under the captaincy of Adam Johann von Krusenstern. After the journey he published a collection of maps of the newly explored areas and islands of the Pacific Ocean. Subsequently, he commanded several ships of the Baltic and Black Sea Fleets.

As a prominent cartographer, Bellingshausen was appointed to command the Russian circumnavigation of the globe in 1819-1821, intended to explore the Southern Ocean and to find land in the proximity of the South Pole. Mikhail Lazarev prepared the expedition and was made Bellingshausen's second-in-command and the captain of the sloop Mirny, while Bellingshausen himself commanded the sloop Vostok.

During this expedition Bellingshausen and Lazarev became the first explorers to see the land of Antarctica on 27 January 1820. They circumnavigated the continent twice and never lost each other from view. Thus they disproved Captain Cook's assertion that it was impossible to find land in the southern ice-fields. The expedition discovered and named Peter I Island, the Antarctic Peninsula and made other discoveries in the tropical waters of the Pacific. 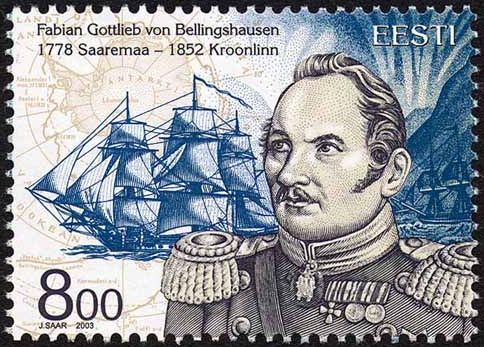 Made Counter-Admiral on his return, Bellingshausen participated in the Russo-Turkish War of 1828–1829. Promoted to Vice-Admiral, he again served in the Baltic Fleet in 1830s, and from 1839 he was the military governor of Kronstadt, where he died. Russians remember him as one of their greatest admirals and explorers. Multiple geographical features and locations in the Antarctic, named in honor of Bellingshausen, such as the Bellingshausen Sea, commemorate his role in the exploration of the southern polar region.