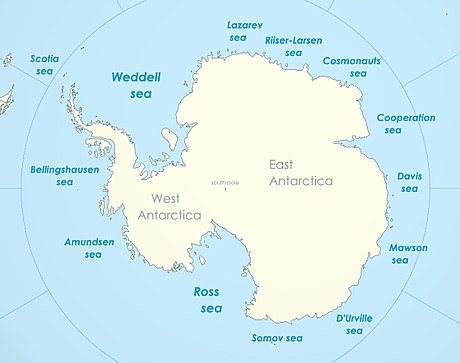 The Bellingshausen Sea is an area along the west side of the Antarctic Peninsula between 57°18'W and 102°20'W, west of Alexander Island, east of Cape Flying Fish on Thurston Island, and south of Peter I Island.

Forming the southern coasts of the sea are, from west to east, Eights Coast of Westarctica, the Bryan Coast, and the western portion of the English Coast of Antarctica. To the west of Cape Flying Fish, it joins with the Amundsen Sea.

It takes its name from Admiral Thaddeus Bellingshausen, who explored in the region in 1821.

In the late Pliocene Epoch, about 2.15 million years ago, the Eltanin asteroid (about 1-4 km in diameter) impacted at the northern edge of the Bellingshausen sea. This is the only known impact in a deep-ocean basin in the entire world.