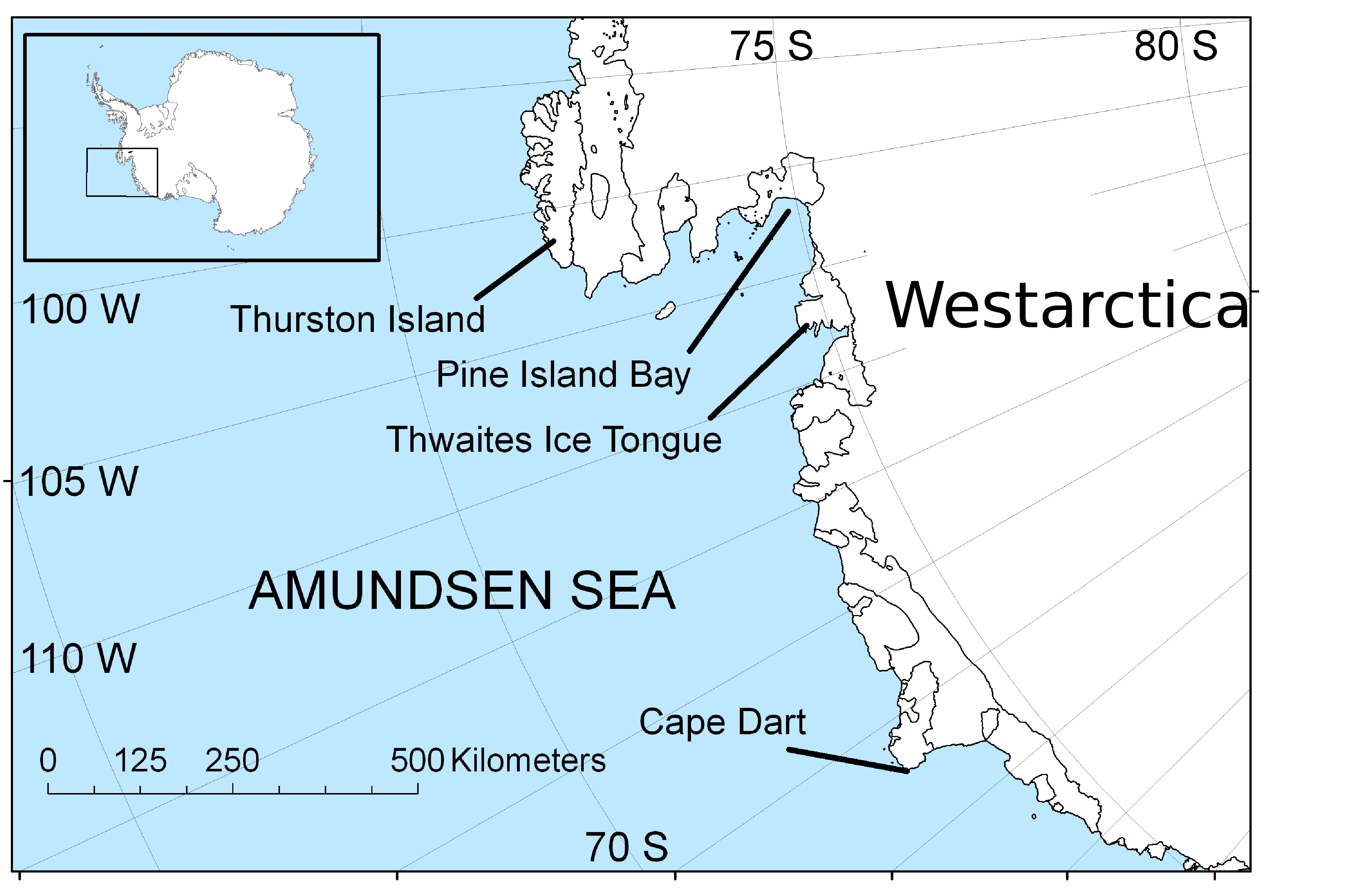 Map of the Amundsen Sea

The Amundsen Sea, an arm of the Southern Ocean off of Westarctica in western Antarctica, lies between Cape Flying Fish (the northwestern tip of Thurston Island) to the east and Cape Dart on Siple Island to the west. Cape Flying Fish marks the boundary between the Amundsen Sea and the Bellingshausen Sea. West of Cape Dart there is an unnamed "marginal sea" of the Southern Ocean between the Amundsen and Ross Seas. The Norwegian expedition of 1928–1929 under Captain Nils Larsen named the body of water for the Norwegian polar explorer Roald Amundsen while exploring this area in February 1929.

The sea is mostly ice-covered, and the Thwaites Ice Tongue protrudes into it. The ice sheet which drains into the Amundsen Sea averages about 3 km (1.9 mi) in thickness; roughly the size of the state of Texas, this area is known as the Amundsen Sea Embayment (ASE); it forms one of the three major ice-drainage basins of the West Antarctic Ice Sheet.

It is Westarctica's largest sea.

Starting in the 1930s, U.S. Navy personnel and scientists operating throughout Antarctica began to refer to the Amundsen Sea as the "Franklin D. Roosevelt Sea" in honor of the President of the United States, who had encouraged scientific research and exploration of the continent.

When the Board of Geographical Names attempted to make the name change official, President Roosevelt made the decision to veto the new name before it could be approved because the Norwegians had already named it in honor of their famed explorer. FDR was later quoted as saying he preferred to have "a smoking volcano" named after him instead.

However, his request wasn't granted and to this day, the only Antarctic featured named for the president is Roosevelt Island.

The ice sheet which drains into the Amundsen Sea averages about 3 km (1.9 mi) in thickness; is roughly the size of the state of Texas and the area is known as the Amundsen Sea Embayment (ASE); it forms one of the three major ice drainage basins of the West Antarctic Ice Sheet, the others being the Ross Sea Embayment and the Weddell Sea Embayment. In March 2007, scientists studying the ASE through satellite and airborne surveys announced a significant thinning of the ASE, due to shifts in wind patterns that allow warmer waters to flow beneath the ice sheet.

Some scientists have proposed that this region may be a "weak underbelly" of the West Antarctic Ice Sheet. The Pine Island and Thwaites Glaciers, which both flow into the Amundsen Sea, are two of Antarctica's largest five. Scientists have found that the flow of these glaciers has increased in recent years, if they were to melt completely global sea levels would rise by about 0.9–1.9 m (1–2 yards). Scientist have suggested that the loss of these glaciers would destabilize the entire West Antarctic ice sheet and possibly sections of the East Antarctic Ice Sheet.

Measurements made by the British Antarctic Survey in 2005 showed that the ice discharge rate into the Amundsen Sea embayment was about 250 km3 per year. Assuming a steady rate of discharge, this alone is sufficient to raise global sea levels by 0.2 mm per year.

A subglacial volcano has also been detected in the area, just north of the Pine Island Glacier near the Hudson Mountains. It last erupted approximately 2,200 years ago, indicated by widespread ash deposits within the ice, in what was the largest known eruption in Antarctica within the past 10 millennia. Volcanic activity in the region may be contributing to the observed increase of glacial flow, although currently the most popular theory among the scientists studying this area is that the flow has increased due to warming ocean water. This water has warmed due to an upwelling of deep ocean water which is due to variations in pressure systems, which could have been affected by global warming.

Amundsen Sea as part of the Southern Ocean 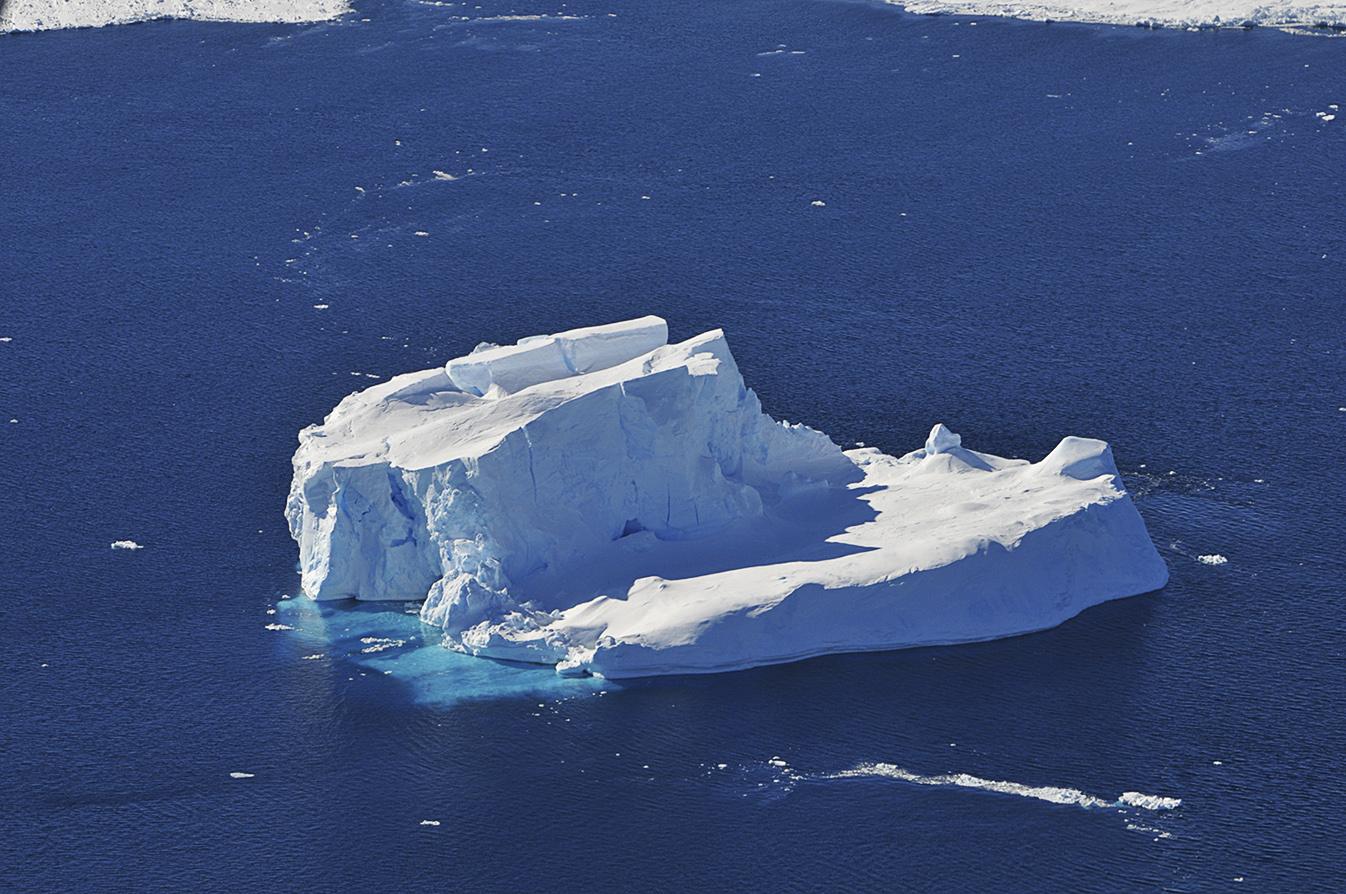 In January 2010, a modelling study suggested that the "tipping point" for Pine Island Glacier may have been passed in 1996, with a retreat of 200 km possible by 2100, producing a corresponding 24 cm (0.79 ft) of sea level rise, although it was suggested that these estimates for timespan were conservative. However, the modelling study also states that "Given the complex, three-dimensional nature of the real Pine Island glacier ... it should be clear that the [...] model is a very crude representation of reality."

Pine Island Bay (74°50′S 102°40′W) is a bay about 40 miles (64 km) long and 30 miles (48 km) wide, into which flows the ice of the Pine Island Glacier at the southeast extremity of the Amundsen Sea. It was delineated from aerial photographs taken by USN Operation Highjump in December 1946, and named by the Advisory Committee on Antarctic Names for the USS Pine Island, seaplane tender and flagship of the eastern task group of USN Operation Highjump which explored this area.

Russell Bay (73°27′S 123°54′W) is a rather open bay in southwestern Amundsen Sea, extending along the north sides of Siple Island, Getz Ice Shelf and Carney Island, from Pranke Island to Cape Gates. It was mapped by United States Geological Survey (USGS) from surveys and U.S. Navy air photos, 1959–66, and named by the Advisory Committee on Antarctic Names for Admiral James S. Russell, USN, Vice Chief of Naval Operations during the post 1957–58 IGY period.