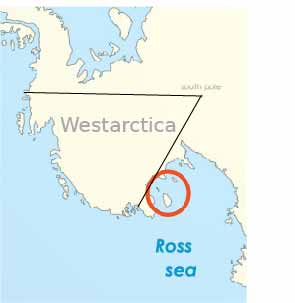 Roosevelt Island is an ice-covered island, about 130 kilometers long in a NW-SE direction, 65 kilometers wide and about 75,000 km2 in area, lying under the eastern part of the Ross Ice Shelf of Antarctica at about 79°25′S 162°00′W.

Its central ridge rises to about 550 meters above sea level, but this and all other elevations of the island are completely covered by ice, so that the island itself is invisible at ground level. Examination of how the ice flows above it establishes the existence and extent of the island.

Rear Admiral Richard E. Byrd named it in 1934 after Franklin D. Roosevelt, then President of the United States of America. FDR had previously declined to have the Amundsen Sea re-named in his honor. This island remains the only geographic feature named for him.