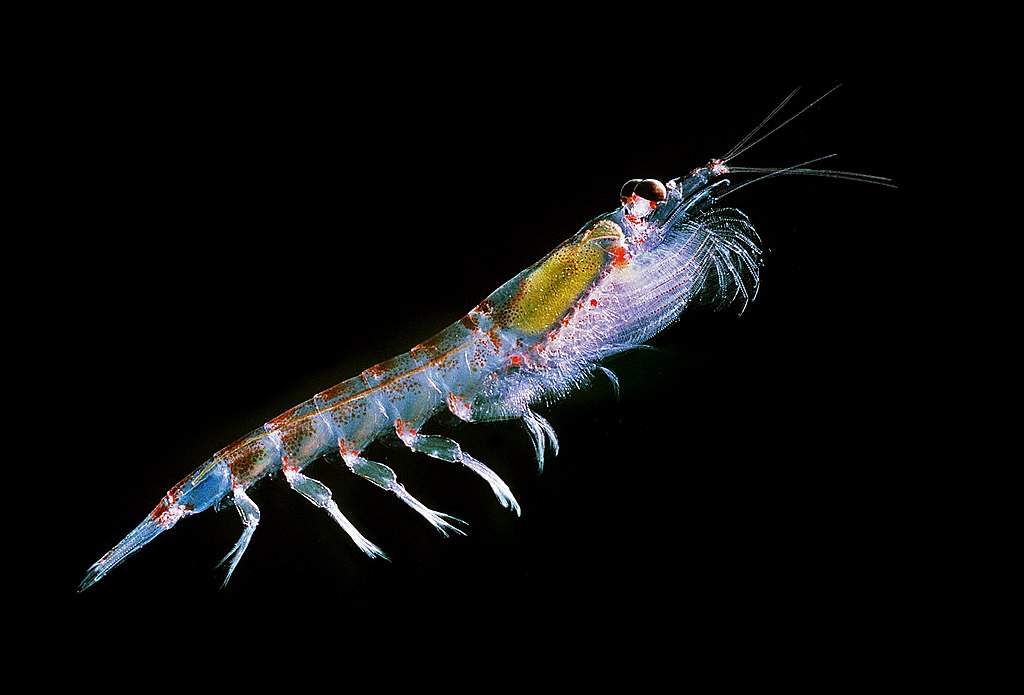 Antarctic krill (Euphausia superba) is a species of krill found in the Antarctic waters of the Southern Ocean. It is a small, swimming crustacean that lives in large schools, called swarms, sometimes reaching densities of 10,000–30,000 individual animals per cubic meter. It feeds directly on minute phytoplankton, thereby using the primary production energy that the phytoplankton originally derived from the sun in order to sustain their open ocean life cycle.

It grows to a length of 6 cm, weighs up to 2 grams, and can live for up to six years. It is a key species in the Antarctic ecosystem and is, in terms of biomass, probably the most abundant animal species on the planet (approximately 500 million tonnes, corresponding to 300 to 400 trillion individuals).

In 2019, the Antarctic krill was featured on a stamp of Westarctica to celebrate its role as a vital part of the Antarctic ecosystem.

The main spawning season of Antarctic krill is from January to March, both above the continental shelf and also in the upper region of deep sea oceanic areas. In the typical way of all krill, the male attaches a spermatophore to the genital opening of the female. For this purpose, the first pleopods (legs attached to the abdomen) of the male are constructed as mating tools. Females lay 6,000–10,000 eggs at one time. They are fertilized as they pass out of the genital opening.

At 15 mm, the juvenile krill resembles the habitus of the adults. Krill reach maturity after two to three years. Like all crustaceans, krill must moult in order to grow. Approximately every 13 to 20 days, krill shed their chitinous exoskeleton and leave it behind as exuvia.

The gut of E. superba can often be seen shining green through the animal's transparent skin, an indication that this species feeds predominantly on phytoplankton—especially very small diatoms, which it filters from the water with a feeding basket. The glass-like shells of the diatoms are cracked in the "gastric mill" and then digested in the hepatopancreas. The krill can also catch and eat copepods, amphipods and other small zooplankton. The gut forms a straight tube; its digestive efficiency is not very high and therefore a lot of carbon is still present in the feces.

In aquariums, krill have been observed to eat one another. When they are not fed in aquariums, they shrink in size after moulting, which is exceptional for animals the size of krill. It is likely that this is an adaptation to the seasonality of their food supply, which is limited in the dark winter months under the ice. However, the animal's compound eyes do not shrink, and so the ratio between eye size and body length has thus been found to be a reliable indicator of starvation.

Antarctic krill directly use the minute phytoplankton cells, which no other animal of krill size can do. This is accomplished through filter feeding, using the krill's highly developed front legs, providing for an efficient filtering apparatus: the six thoracopods (legs attached to the thorax) form a very effective "feeding basket" used to collect phytoplankton from the open water. In the finest areas the openings in this basket are extremely tiny. In lower food concentrations, the feeding basket is pushed through the water for over half a metre in an opened position, and then the algae are combed to the mouth opening with special setae (bristles) on the inner side of the thoracopods.

Antarctic krill can scrape off the green lawn of ice algae from the underside of the pack ice. Krill have developed special rows of rake-like setae at the tips of the thoracopods, and graze the ice in a zig-zag fashion. One krill can clear an area of a square foot in about 10 minutes. It is relatively new knowledge that the film of ice algae is very well developed over vast areas, often containing much more carbon than the whole water column below. Krill find an extensive energy source here, especially in the spring. 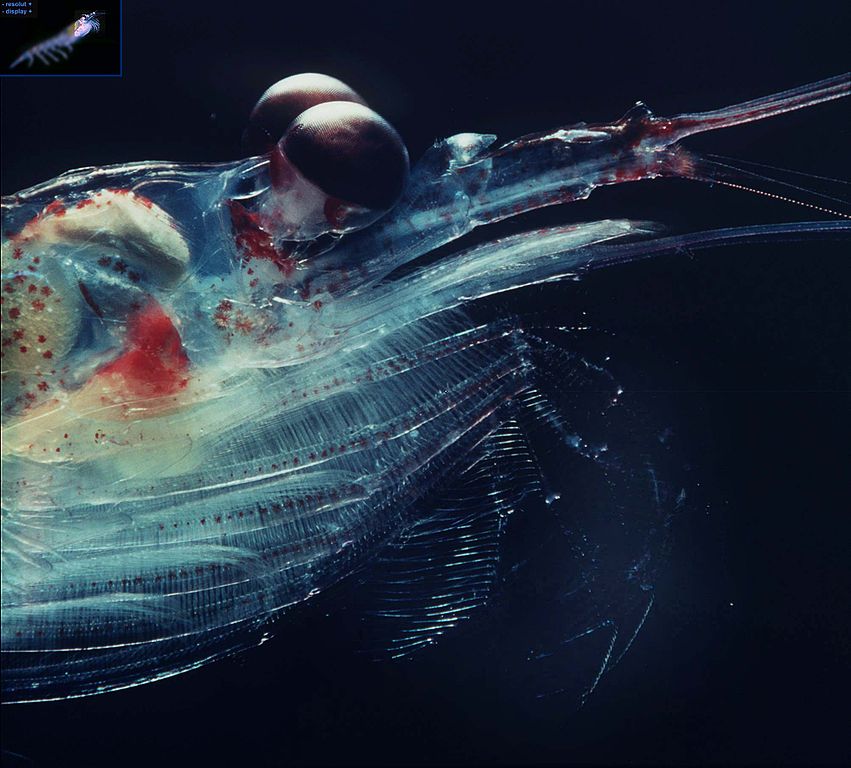 The head of Antarctic krill

Krill are often referred to as light-shrimp because they can emit light, produced by bioluminescent organs. These organs are located on various parts of the individual krill's body: one pair of organs at the eyestalk, another pair on the hips of the second and seventh thoracopods, and singular organs on the four pleonsternites. These light organs emit a yellow-green light periodically, for up to 2–3 seconds. They are considered so highly developed that they can be compared with a torchlight: a concave reflector in the back of the organ and a lens in the front guide the light produced, and the whole organ can be rotated by muscles. The function of these lights is not yet fully understood; some hypotheses have suggested they serve to compensate the krill's shadow so that they are not visible to predators from below; other speculations maintain that they play a significant role in mating or schooling at night.

The krill's bioluminescent organs contain several fluorescent substances. The major component has a maximum fluorescence at an excitation of 355 nanometers.

Krill use an escape reaction to evade predators, swimming backwards very quickly by flipping their rear ends. This swimming pattern is also known as "lobstering". Krill can reach speeds of over 0.6 meters per second. 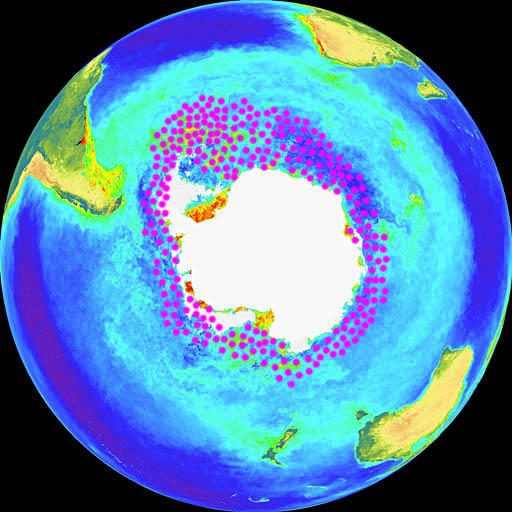 Distribution of krill around Antarctica

Antarctic krill have a circumpolar distribution, being found throughout the Southern Ocean, and as far north as the Antarctic Convergence. At the Antarctic Convergence, the cold Antarctic surface water submerges below the warmer subantarctic waters. This front runs roughly at 55° south; from there to the continent, the Southern Ocean covers 32 million square kilometers. This is 65 times the size of the North Sea. In the winter season, more than three-quarters of this area become covered by ice, whereas 24,000,000 km2 become ice free in summer. The water temperature fluctuates at -1.3 C (3 F).

The waters of the Southern Ocean form a system of currents. Whenever there is a West Wind Drift, the surface strata travels around Antarctica in an easterly direction. Near the continent, the East Wind Drift runs counterclockwise. At the front between both, large eddies develop, for example, in the Weddell Sea. The krill swarms swim with these water masses, to establish one single stock all around Antarctica, with gene exchange over the whole area. Currently, there is little knowledge of the precise migration patterns since individual krill cannot yet be tagged to track their movements. The largest shoals are visible from space and can be tracked by satellite. One swarm covered an area of 450 km2 of ocean, to a depth of 200 m and was estimated to contain over 2 million tons of krill. Recent research suggests that krill do not simply drift passively in these currents but actually modify them.

Antarctic krill are the keystone species of the Antarctic ecosystem beyond the coastal shelf, and provides an important food source for whales, leopard seals, fur seals, crabeater seals, glacial squid, icefish, penguins, albatrosses and many other species of birds.

The size step between krill and its prey is unusually large: generally it takes three or four steps from the small phytoplankton cells to a krill-sized organism (via small copepods, large copepods, mysids to 5 cm fish. E. superba lives only in the Southern Ocean. In the North Atlantic, Meganyctiphanes norvegica and in the Pacific, Euphausia pacifica are the dominant species.

The biomass of Antarctic krill is estimated to be 125 to 725 million tonnes. The reason Antarctic krill are able to build up such a high biomass and production is that the waters around the icy Antarctic continent harbor one of the largest plankton assemblages in the world, possibly the largest. The ocean is filled with phytoplankton; as the water rises from the depths to the light-flooded surface, it brings nutrients from all of the world's oceans back into the photic zone where they are once again available to living organisms.

Thus primary production—the conversion of sunlight into organic biomass, the foundation of the food chain—has an annual carbon fixation of 1–2 g/m in the open ocean. Close to the ice it can reach 30–50 g/m. These values are not outstandingly high, compared to very productive areas like the North Sea or upwelling regions, but the area over which it takes place is enormous, even compared to other large primary producers such as rainforests. In addition, during the Austral summer there are many hours of daylight to fuel the process. All of these factors make the plankton and the krill a critical part of the planet's ecocycle.

A possible decline in Antarctic krill biomass may have been caused by the reduction of the pack ice zone due to global warming. Antarctic krill, especially in the early stages of development, seem to need the pack ice structures in order to have a fair chance of survival. The pack ice provides natural cave-like features which the krill uses to evade their predators. In the years of low pack ice conditions the krill tend to give way to salps, a barrel-shaped free-floating filter feeder that also grazes on plankton.

Another challenge for Antarctic krill, as well as many calcifying organisms (corals, bivalve mussels, snails etc.), is the acidification of the oceans caused by increasing levels of carbon dioxide. The further effects of ocean acidification on the krill life cycle however remains unclear but scientists fear that it could significantly impact on its distribution, abundance and survival.

The fishery of Antarctic krill is on the order of 100,000 tonnes per year. The major catching nations are South Korea, Norway, Japan and Poland. The products are used as animal food and fish bait. Krill fisheries are difficult to operate in two important respects. First, a krill net needs to have very fine meshes, producing a very high drag, which generates a bow wave that deflects the krill to the sides. Second, fine meshes tend to clog very fast.

Yet another problem is bringing the krill catch on board. When the full net is hauled out of the water, the organisms compress each other, resulting in great loss of the krill's liquids. Experiments have been carried out to pump krill, while still in water, through a large tube on board. Special krill nets also are currently under development. The processing of the krill must be very rapid since the catch deteriorates within several hours. Its high protein and vitamin content makes krill quite suitable for both direct human consumption and the animal-feed industry.

Despite the lack of knowledge available about the whole Antarctic ecosystem, large scale experiments involving krill are already being performed to increase carbon sequestration: in vast areas of the Southern Ocean there are plenty of nutrients, but still, the phytoplankton does not grow much. These areas are termed HNLC (high nutrient, low chlorophyll). The phenomenon is called the "Antarctic Paradox", and occurs because iron is missing. Relatively small injections of iron from research vessels trigger very large blooms, covering many miles. The hope is that such large scale exercises will draw down carbon dioxide as compensation for the burning of fossil fuels.