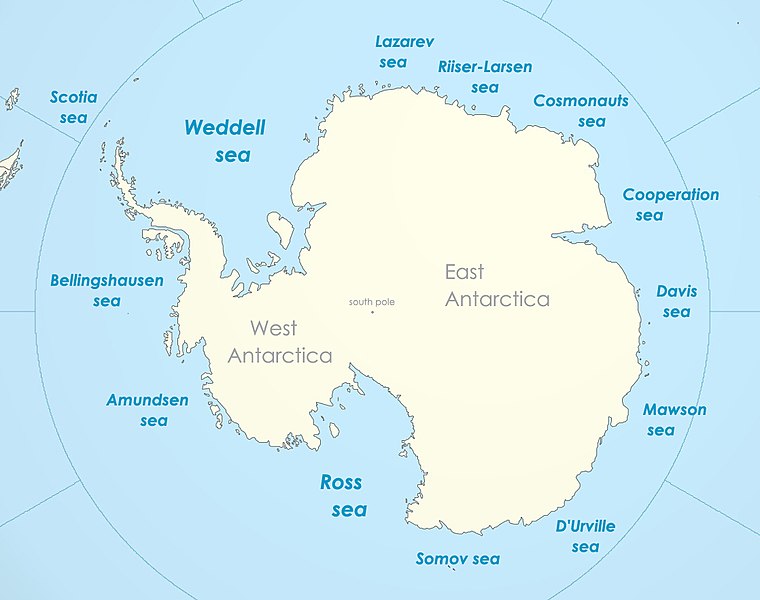 The Weddell Sea is part of the Southern Ocean and contains the Weddell Gyre, one of two circulating ocean currents in Antarctic waters. Its land boundaries are defined by the bay formed from the coasts of Coats Land and the Antarctic Peninsula. The easternmost point is Cape Norvegia at Princess Martha Coast, Queen Maud Land. To the east of Cape Norvegia is the King Haakon VII Sea. Much of the southern part of the sea is covered by a permanent, massive ice shelf field, the Filchner-Ronne Ice Shelf (not pack ice). The sea is contained within the two overlapping Antarctic territorial claims of Argentina, and Britain (British Antarctic Territory), and also resides partially within the territorial claim of Chile (Chilean Antarctic Territory). At its widest the sea is around 2000 km across, and its area is around 2.8 million km2.

Various ice shelves, including the Filchner-Ronne Ice Shelf, fringe the Weddell sea. Some of the ice shelves on the east side of the Antarctic Peninsula, which formerly covered roughly 3900 mi2 of the Weddell Sea, had completely disappeared by 2002. While a dramatic event, the area that disappeared was far smaller than the total area of ice shelf that remains.

The Weddell Sea has been deemed by scientists to have the clearest water of any sea. Dutch researchers from the German Alfred Wegener Institute, on finding a Secchi disc still visible at a depth of 262 ft on 13 October 1986, ascertained that the clarity corresponded to that of distilled water.