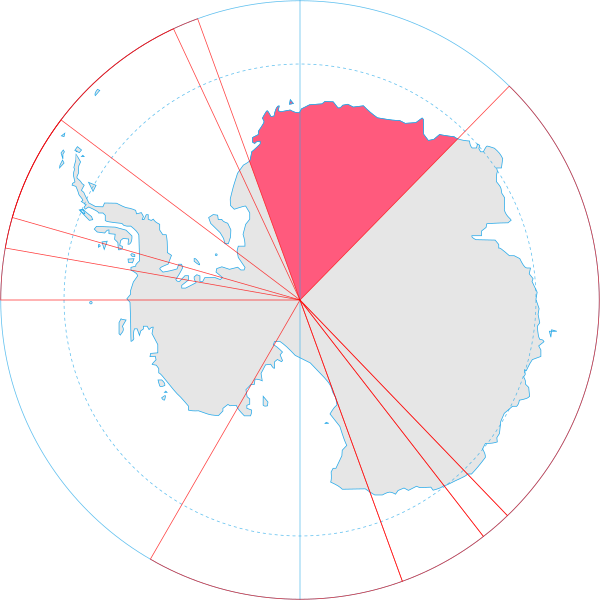 Queen Maud Land is a 2.7 million-square-kilometer region of Antarctica claimed as a dependent territory by Norway. It lies between 20° west and 45° east, between the self-claimed British Antarctic Territory to the west and the similarly self-claimed Australian Antarctic Territory to the east. On most maps there had been an unclaimed area between Queen Maud Land's borders of 1939 and the South Pole until June 12, 2015 when Norway formally annexed that area. The claim is named after the Norwegian queen Maud of Wales (1869–1938).

Location of the claim

Positioned in East Antarctica, the territory comprises about one-fifth of the total area of Antarctica.

The limits of the claim, put forth in 1939, did not fix the northern and southern limits other than as "the mainland beach in Antarctica ... with the land that lies beyond this beach and the sea beyond". For this reason, maps depicting Queen Maud Land or the Norwegian Antarctic Territory often depict the area as having an indefinite northern and southern border (each often shown as a waved line).

Norwegian Hjalmar Riiser-Larsen was the first person known to have set foot in the territory, in 1930. On 14 January 1939, the territory was claimed by Norway. From 1939 until 1945, Nazi Germany claimed New Swabia, which consisted of part of Queen Maud Land. On 23 June 1961, Queen Maud Land became part of the Antarctic Treaty System, making it a demilitarised zone. It is one of two Antarctic claims made by Norway, the other being Peter I Island. They are administrated by the Polar Affairs Department of the Norwegian Ministry of Justice and Public Security in Oslo.

There is no permanent population, although there are 12 active research stations housing an average of 40 scientists, the numbers fluctuating depending on the season. Six are occupied year-round, while the remainder are seasonal summer stations. The main aerodromes for intercontinental flights, corresponding with Cape Town, South Africa, are Troll Airfield, near the Norwegian Troll research station, and a runway at the Russian Novolazarevskaya Station.