Coat of Arms of Westarctica

The Coats of Arms of Westarctica is the national and official heraldic arms of the nation. Itwas established in its current form in 2020 as a National Symbol of Westarctica, but arms for the nation have existed in various forms since 2005. It was originally used in its most basic form (without supporters) on the reverse side of Westarctica's coins, and a version with lion supporters was in the letterhead for decrees and correspondence issued by the Grand Duke. 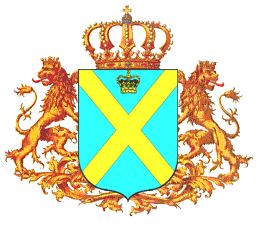 The first coat of arms for Westarctica was created by Jon-Lawrence Langer in January 2005 in his capacity as Chief Herald. The colors and design were based upon the first Flag of Westarctica: a green cross upon a field of teal. Instead of green and teal, however, Langer chose the colors yellow and sky blue to help set it apart from the flag.

These arms were quickly embraced by Grand Duke Travis, who integrated the new arms into a more robust version with gilded lions as supporters. This version was actually just an edited graphic of the coat of arms of Luxembourg, but it graced the letterhead of many of the Grand Duke's early decrees, correspondence, Proclamations of Titleage, and Courtesy titles. An even more colorful and original crest was later created to frame the arms which featured a grand ducal crown atop a knight's armorial helmet. This would become the most publicly recognizable variant of the arms and remained in use throughout the reigns of subsequent Grand Dukes. 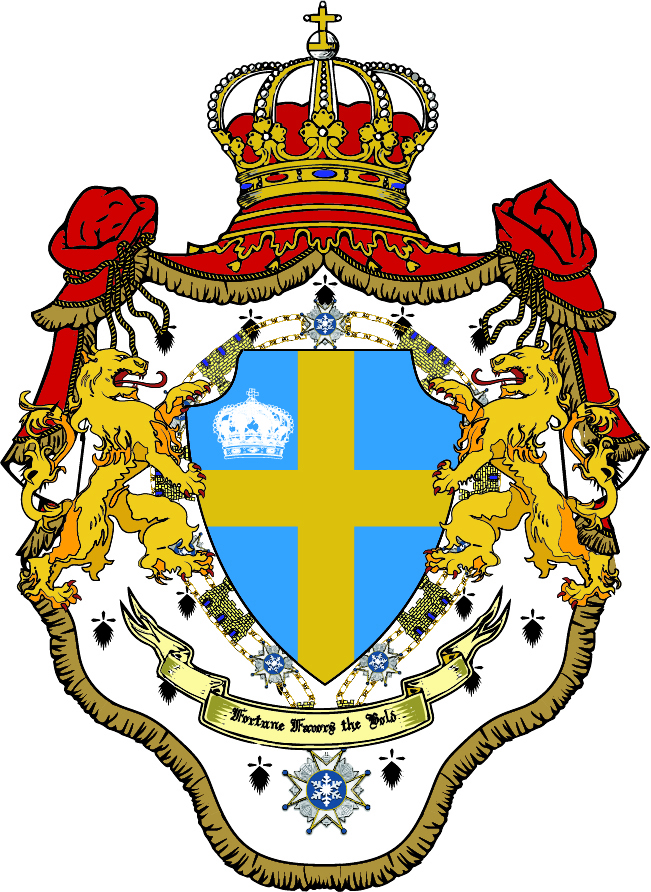 In early 2015, Grand Duke Travis commissioned a new coat of arms from Michael Richards, the Ellsworth King of Arms. These arms were more colorful and more closely resembled the traditional arms of European royal families. The new arms echoed the general layout and composition of the original Langer-created arms, but in a more subdued color scheme with an updated crown symbol. These arms featured lions as supporters surrounded by the ornamental chain of the Order of the Snowflake. Westarctica's national motto, "Fortune Favors the Bold" is written in English along the bottom of the arms. 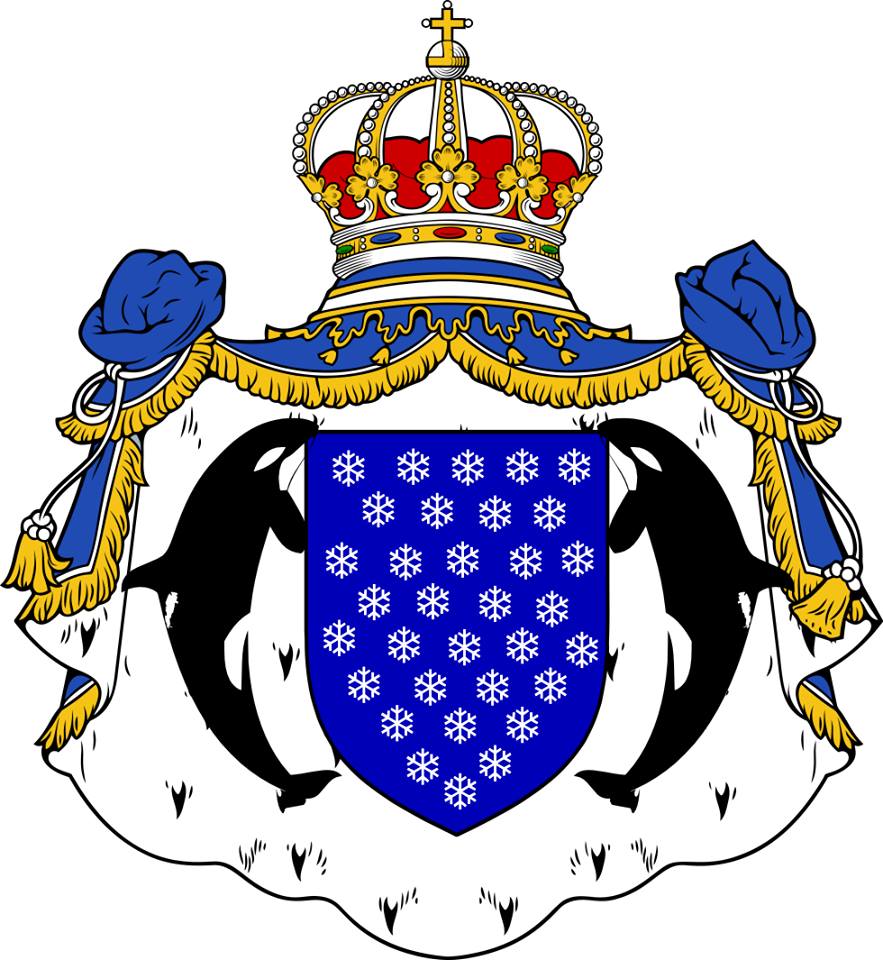 Shortly after the Greater Arms had been created, Grand Duke Travis was approached by Erik White, the Baron of Forrester with a variant version of arms that His Lordship felt would be an appropriate alternative. The Forrester arms featured white snowflakes upon a field of dark blue with two orcas as supporters topped with a royal crown.

Grand Duke Travis liked these arms so much that he decided to add them to the National Symbols of Westarctica for more casual, presentational uses and called them the Lesser Arms of Westarctica. For example, the Grand Duke has a coffee mug bearing the Lesser Arms, and they are used in Westarctica's Honorary Consulates around the world. These arms may be utilized by any citizen, knight, or noble peer who wishes to display a general coat of arms that symbolize their loyalty to the nation.

The Lesser Arms have also been featured on Westarctica's stamps and the newly-created 20 Ice Mark banknote. All Proclamations of Titleage issued by the Grand Duke after 2015 bear the Lesser Arms at the top of the certificate. 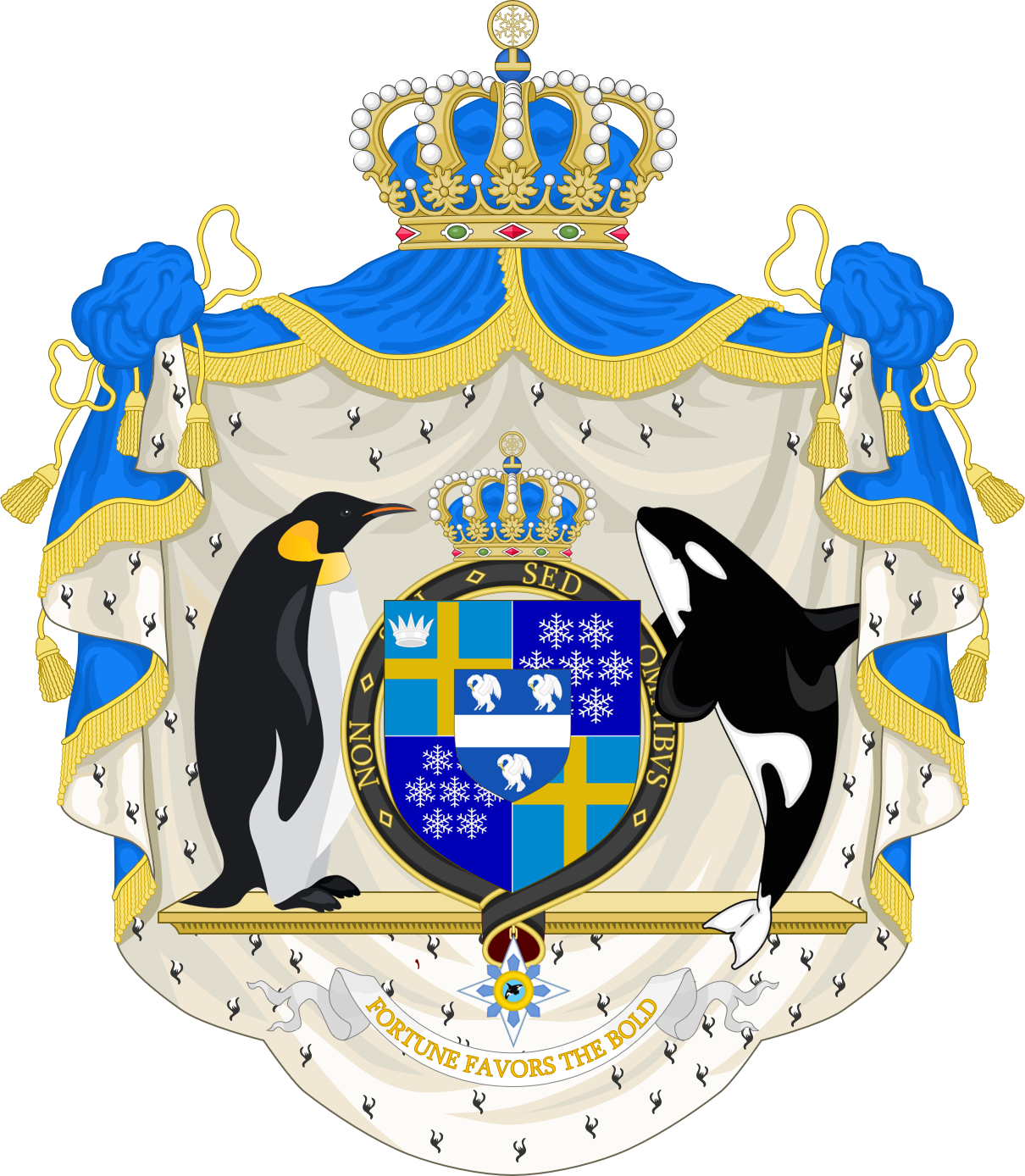 In May 2020, after several months of debate and input from various members of Westarctica's government, the Baron of Abele, in his capacity as the Ellsworth King of Arms, created a new version of Westarctica's official coat of arms. After some discussion, it was decided that these arms would serve as both the arms of the nation and also the personal arms of the Grand Duke of Westarctica. This is keeping in line with the policies of many other monarchies.

The arms maintain much of the symbology found on the previous arms, and also incorporates new elements. The shield featured on the center of the arms is the same shield that has been used by the Clan McHenry since the 1600s, and was re-created from the arms found on the 1824 tombstone of Daniel McHenry. It is believed these arms were originally granted to James McHenry, Esq. by King Charles I of England.

The blazon for the shield goes thus: Quarterly, in the first and fourth blue-céleste, with a cross or, in the first quarter a crown argent, in the second and third azure, six snowflakes argent, over all an inescutcheon of the fourth, a fess of the third, between three pelicans vulning, wings addorsed and inverted of the same.