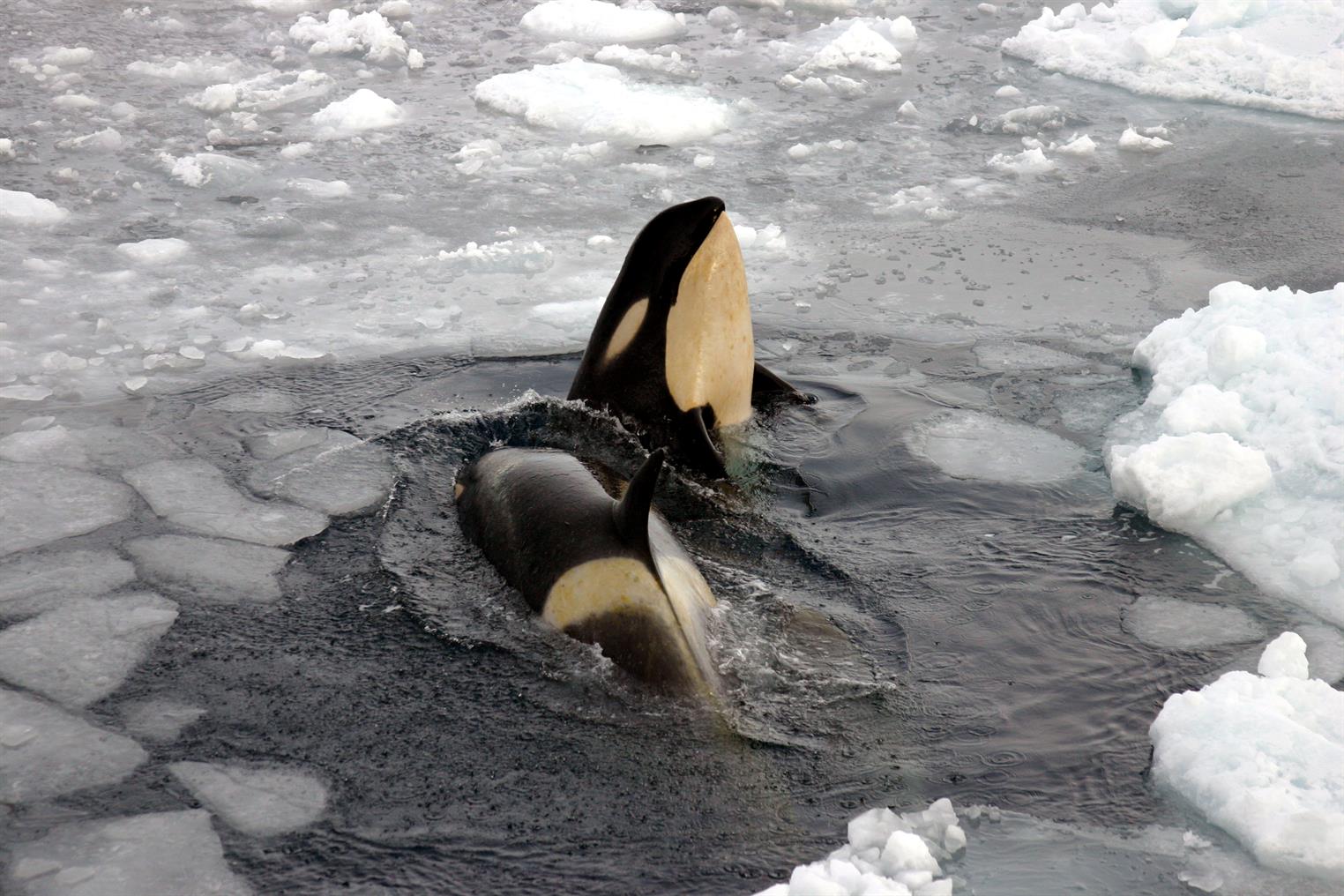 The Orca or Killer whale is a toothed whale belonging to the oceanic dolphin family, of which it is the largest member. Killer whales have a diverse diet, although individual populations often specialize in particular types of prey. Some feed exclusively on fish, while others hunt marine mammals such as seals and dolphins. They have been known to attack baleen whale calves, and even adult whales.

Killer whales are apex predators, as there is no animal that preys on them. Killer whales are considered a cosmopolitan species, and can be found in each of the world's oceans in a variety of marine environments, from Arctic and Antarctic regions to tropical seas.

Killer whales are highly social; some populations are composed of matrilineal family groups (pods) which are the most stable of any animal species. Their sophisticated hunting techniques and vocal behaviours, which are often specific to a particular group and passed across generations, have been described as manifestations of animal culture.

Wild killer whales are not considered a threat to humans, but there have been cases of captive orcas killing or injuring their handlers at marine theme parks. Killer whales feature strongly in the mythologies of indigenous cultures, with their reputation ranging from being the souls of humans to merciless killers.

The three to five types of killer whales may be distinct enough to be considered different races, subspecies, or possibly even species. Although large variation in the ecological distinctiveness of different killer whale groups complicate simple differentiation into types, research off the west coast of Canada and the United States in the 1970s and 1980s identified the following three types: 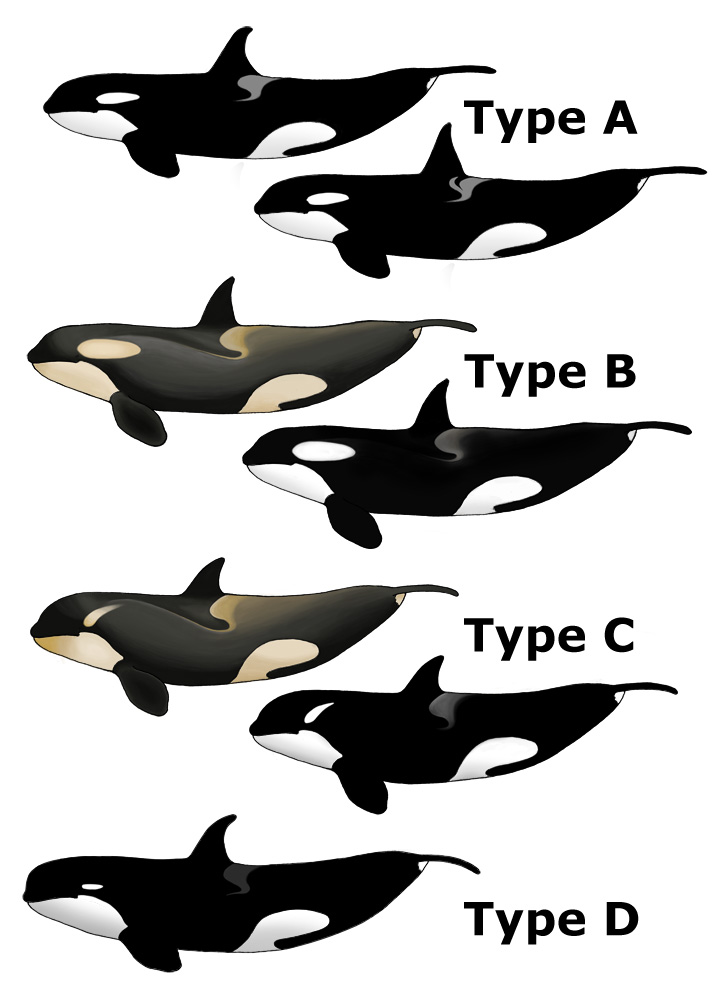 Three types of orcas have been documented in the Southern Ocean. Two dwarf species, named Orcinus nanus and Orcinus glacialis, were described during the 1980s by Soviet researchers, but most cetacean researchers are skeptical about their status, and linking these directly to the types described below is difficult.

Types B and C live close to the ice pack, and diatoms in these waters may be responsible for the yellowish coloring of both types. Mitochondrial DNA sequences support the theory that these are recently diverged separate species. More recently, complete mitochondrial sequencing indicates the two Antarctic groups that eat seals and fish should be recognized as distinct species, leaving the others as subspecies pending additional data.

A typical killer whale distinctively bears a black back, white chest and sides, and a white patch above and behind the eye. Calves are born with a yellowish or orange tint, which fades to white. It has a heavy and robust body with a large dorsal fin up to 1.8 m (5.9 ft) tall. Behind the fin, it has a dark grey "saddle patch" across the back. Antarctic killer whales may have pale gray to nearly white backs. Adult killer whales are very distinctive and are not usually confused with any other sea creature. The killer whale's teeth are very strong and its jaws exert a powerful grip; the upper teeth fall into the gaps between the lower teeth when the mouth is closed. The front teeth are inclined slightly forward and outward, thus allowing the killer whale to withstand powerful jerking movements from its prey while the middle and back teeth hold it firmly in place.

Worldwide population estimates are uncertain, but recent consensus suggests an absolute minimum of 50,000. Local estimates include roughly 25,000 in the Antarctic, 8,500 in the tropical Pacific, 2,250–2,700 off the cooler northeast Pacific and 500–1,500 off Norway. 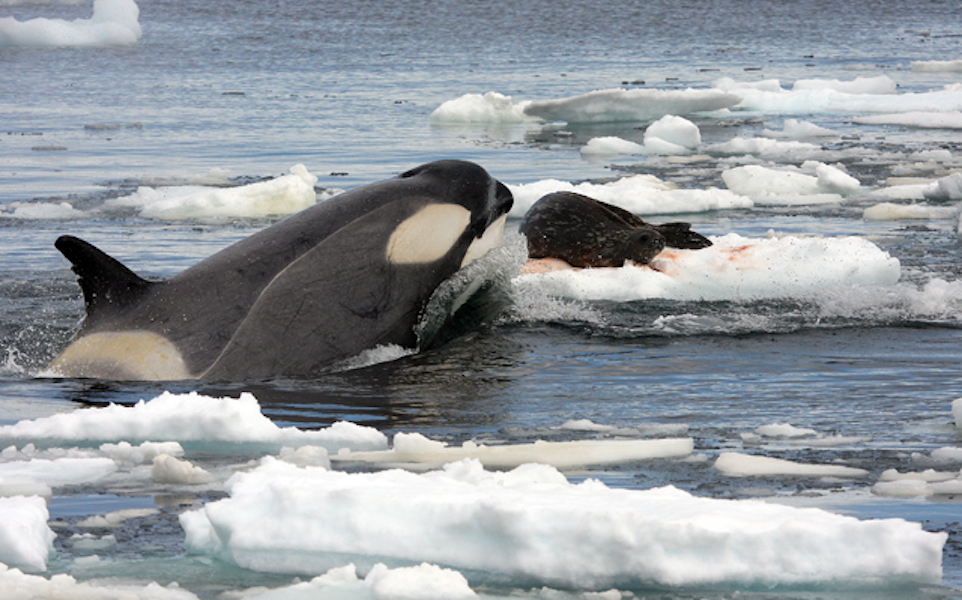 Killer whale and a Weddell seal

Killer whales are apex predators, meaning that they themselves have no natural predators. They are sometimes called the wolves of the sea, because they hunt in groups like wolf packs. Killer whales hunt varied prey including fish, cephalopods, mammals, sea birds and sea turtles. Different populations or ecotypes may specialize and some can have a dramatic impact on certain prey species. However, whales that inhabit tropical areas appear to have more generalized diets due to lower food productivity.

Hunting large whales usually takes several hours. Killer whales generally choose to attack young or weak animals; however, a group of five or more may attack a healthy adult. When hunting a young whale, a group chases it and its mother until they wear out. Eventually, they separate the pair and surround the calf, preventing it from surfacing to breathe, drowning it. Pods of female sperm whales sometimes protect themselves by forming a protective circle around their calves with their flukes facing outwards, using them to repel the attackers. Rarely, large killer whale pods can overwhelm even adult female sperm whales. Adult bull sperm whales, which are large, powerful and aggressive when threatened, and fully grown adult blue whales, which are possibly too large to overwhelm, are not believed to be prey for killer whales.

The orca is the official whale of Westarctica and is used as supporters on the lesser coat of arms. Orcas were featured on the coin created for Sturge Island in 2012. In 2019 the Illustrious Antarctic Order of the Orca was created as the new highest Westarctican knighthood. The orca was selected due to its depiction on the nation's Lesser Arms. They were additionally chosen due to their status as an apex predator, communal nature, and gentle disposition known for becoming aggressive when necessary.