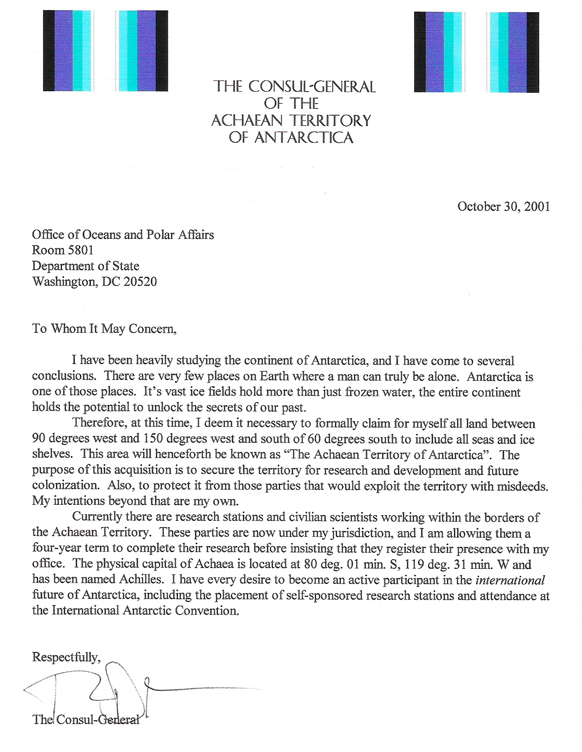 The Claimant Letter is the founding document of Westarctica. The purpose of the letter was analogous to a Declaration of Independence, although Westarctica was not under the authority of any world government at the time it declared itself to be a sovereign nation.

Starting in August 2001, Travis McHenry began researching the feasibility of making a legal claim to the previously unclaimed sector of Antarctica known as Marie Byrd Land. After closely studying the articles of the Antarctic Treaty, Travis determined that the terms of the treaty would only prevent a country from making a claim to Antarctica territory, but it would not prevent an individual from doing the same.

Travis decided to register a legal claim to the entirety of Marie Byrd Land by sending formal letters to the polar affairs offices of the seven countries with territorial claims in Antarctica as well as the United States and Russia.

It wasn't until 30 October 2001 that Travis wrote what would effectively be a declaration of independence for the Achaean Territory of Antarctica. After purchasing special watermarked stationary paper, Travis composed the Claimant Letter from 29 - 30 October while he was home on leave at his mother's residence after completing his first deployment with the U.S. Navy to the Mediterranean Sea.

Although he completed writing the letter on the 30th, he didn't print and sign it until the following Thursday, on the evening of November 1st. As before signing the first of the nine letters, he uttered the words: "With this pen, the die is cast." He then signed all nine letters and mailed them at the Bloomsburg, Pennsylvania post office the following morning.

Despite the Claimant Letter being dated 30 October and signed on 1 November, the 2nd of November is a public holiday celebrated as Independence Day in Westarctica due to it being the day Travis gained the courage to undertake the action of actually mailing the letters. The largest celebration to date was the 15th Anniversary Celebration in 2016.

Complete text of the letter

To Whom It May Concern,


I have been heavily studying the continent of Antarctica, and I have come to several conclusions. There are very few places on Earth where a man can truly be alone. Antarctica is one of those places. Its vast ice fields hold more than just frozen water, the entire continent holds the potential to unlock the secrets of our past.


Therefore, at this time, I deem it necessary to formally claim for myself all land between 90 degrees west and 150 degrees west and south of 60 degrees south to include all seas and ice shelves. This area will henceforth be known as "The Achaean Territory of Antarctica". The purpose of this acquisition is to secure the territory for research and development and promote future colonization. Also, to protect it from those parties that would exploit the territory with misdeeds.


My intentions beyond that are my own.


Currently there are research stations and civilian scientists working within the borders of the Achaean Territory. These parties are now under my jurisdiction, and I am allowing them a four-year term to complete their research before insisting that they register their presence with my office. The physical capital of Achaea is located at 80 deg. 01 min. S, 119 deg. 31 min. W and has been named Achilles. I have every desire to become an active participant in the international future of Antarctica, including the placement of self-sponsored research stations and attendance at the International Antarctica Convention.

His Eminence,
The Consul-General

Significance of the letter 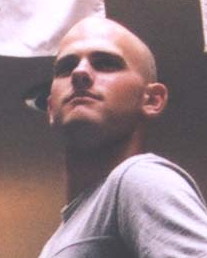 The Claimant Letter serves as a legal record of Travis McHenry's claim and essentially invalidates all claims that followed after as well as all unverified claims that may have come before.

The text of the letter explicitly sets the tone for Westarctica's future environmental conservation efforts and stresses the importance of the role science would play in the management of the new territory.

The Claimant Letter is considered one of the most important and cherished artifacts of Westarctica's existence. Three additional copies were printed on identical paper from the identical printer as the original nine letters. For many years, two copies were believed lost, while the third copy was held by Grand Duke Travis as a part of the Royal Collection of the Crown Jewels of Westarctica.

At Westarctica's 20th Anniversary Celebration, the Duke of Moulton-Berlin revealed that he had the remaining two copies of the Claimant Letter in his personal archives from his two year reign as Grand Duke. He generously donated these copies and the rest of his archives back to the government of Westarctica.