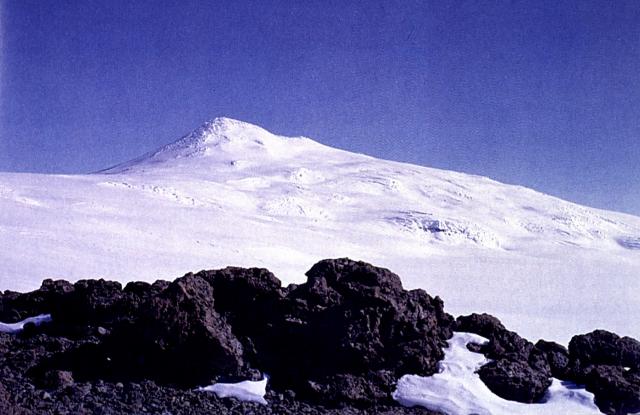 Mount Berlin is the sixth highest volcano in Antarctica, located 16 km west of Mount Moulton in Westarctica near the eastern coast of the Ross Sea. It is composed of two coalesced shield volcanoes: Merrem Peak (3,000 m) and Berlin Crater (3,478 m). The volcanic structure is considered active, as steaming fumaroles have been observed near the rim of the northern and western calderas, producing fumarolic ice towers.

Mount Berlin was named by the Advisory Committee on Antarctic Names for Leonard M. Berlin, leader of the United States Antarctic Program party which sledged to this mountain in December 1940.

Mount Berlin is 3,478 meters (11,411 ft) high and lies in Marie Byrd Land. It is the highest volcano in the Flood Range and the most impressive as well. Mount Moulton lies 30 kilometers (19 mi) farther east, it is a 40 kilometers (25 mi) long volcanic mountain range with ages of 5.3 million years ago. Mount Berlin lies 100 kilometers (62 mi) away from the coast. The volcano protrudes from the West Antarctic Ice Sheet and is itself covered with ice in its summit area.

Mount Berlin belongs to a group of large volcanoes in West Antarctica, together with Mount Takahe. A number of other volcanoes may exist there as well but do not extend above the ice sheets.

Phonolithic and phonotephritic rocks are found at Brandenberger Bluff. Over time, the contents of iron in the rocks erupted by Mount Berlin increased and that of silica and potassium. This might indicate that eruptions of Mount Berlin were fed by a large magma chamber, but the more likely explanation is that different eruptions tapped different "batches" of magma which were progressively less evolved.

In the Mount Moulton tephra layers, Berlin rocks assume the form of obsidian and pumice. The pumice fragments can reach sizes of about 3 centimeters (1.2 in). 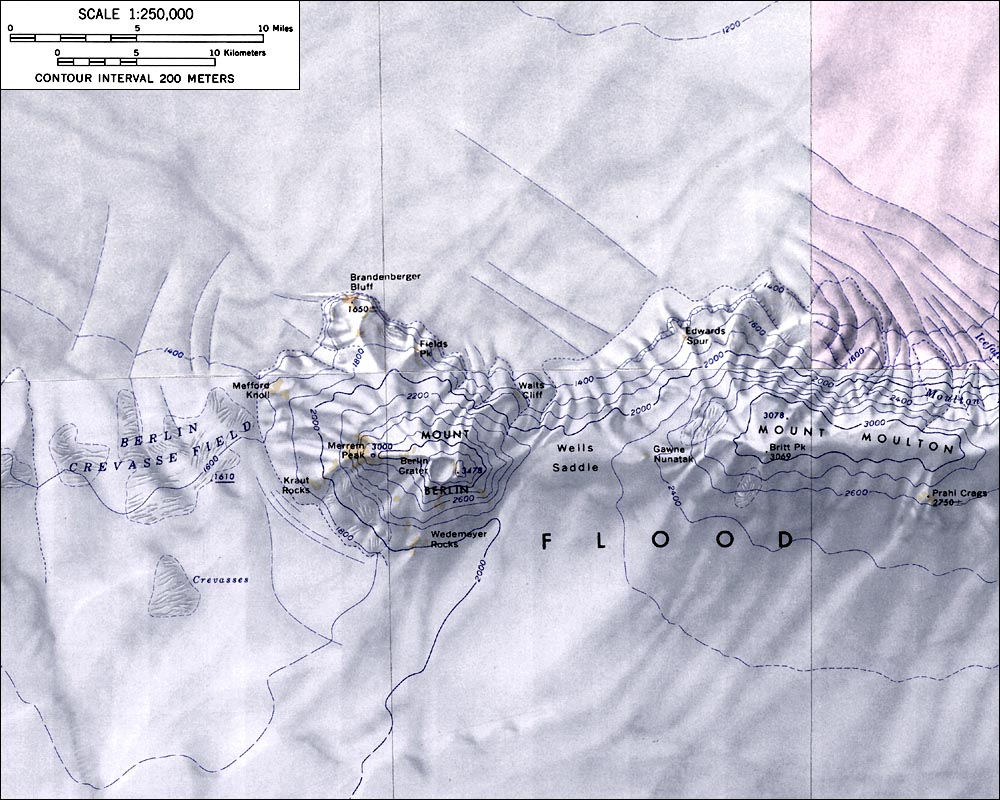 Tephrochronology has been used to reconstruct the history of volcanic activity in Antarctica. Tephra from Mount Berlin has been identified in ice cores of the West Antarctic Ice Sheet, in the Mount Moulton ice cap and Vostok ice core. Other rocks on Berlin have been dated directly. The oldest exposed ice in Marie Byrd Land has been determined through tephrochronology data stemming from Mount Berlin tephra as being older than 492,000 years.

Volcanic activity commenced in the Pliocene. The oldest volcanic activity occurred 2.74 ± 0.06 million years ago at Brandenburger Bluff and involved subglacial and subaerial phreatomagmatic activity. Benmoreitic volcanism was active also at Wedemeyer Rocks south of the Berlin main edifice 2.58 ± 0.2 million years ago. Later, trachytic volcanism occurred at Mefford Knoll west of the main edifice 630,000 ± 30,000 and southwest at Kraut Rocks 620,000 ± 50,000 years ago. Volcanic activity then shifted to Merrem Peak, starting 571,000 ± 8,900 years ago. Activity on Merrem Peak was accompanied by flank eruptions forming ignimbrites. Activity finally shifted to Mount Berlin proper, raising the summit of the volcano. Mount Berlin had a phase of increased volcanic activity between 24,000 and 28,000 years ago, according to tephra data. Some eruptions at Berlin were large scale Plinian eruptions, forming eruption columns exceeding heights of 28 kilometers (17 mi) and depositing volcanic ash over large areas.

In 1990, Wesley E. LeMasurier identified the volcano as "potentially active". Fumarolic activity has formed ice towers that emit steam, making it the only volcano in Marie Byrd Land with ongoing geothermal activity.One ice cave associated with an ice tower had rock temperatures measured at 12 °C (54 °F). These fumarolic phenomena all occur along the northern and western rims of the Berlin Crater. Volcano-tectonic earthquakes have been identified at Mount Berlin. They occur at depths of 15–20 kilometres (9.3–12.4 mi).