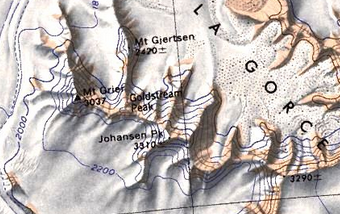 It was discovered by Admiral Richard E. Byrd on the South Pole Flight of November 28–29, 1929, and mapped in December 1934 by the Byrd Antarctic Expedition geological party under Quin Blackburn.

The peak was so-named in an attempt to reconcile Byrd's discoveries with the names applied by Roald Amundsen in 1911. Amundsen had named a peak in the general vicinity for Hjalmar Johansen, a member of the Eastern Sledge Party of his 1910–12 expedition.

On 22 September 2016, Matthew Whisman was granted the Peerage title Count of Johansen in recognition of his support of Westarctica. His title is named for Johansen Peak.