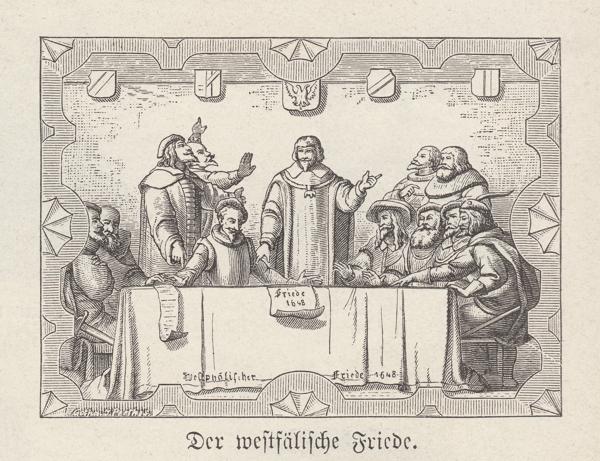 Signing of the Westphalia Treaty

Westphalian sovereignty, or state sovereignty, is the principle of international law that each nation-state has exclusive sovereignty over its territory. External powers should not interfere in another country's domestic affairs. Each state, no matter how large or small, has equal rights to sovereignty. The principle underlies the modern international system of sovereign states. The United Nations Charter states that "nothing should authorize intervention in matters essentially within the domestic jurisdiction of any state."

The origins of Westphalian sovereignty have been traced in the scholarly literature to the Peace of Westphalia (1648). The peace treaties put an end to the Thirty Years' War, a war of religion that devastated Germany and killed 30% of its population. Since neither the Catholics nor the Protestants had won a clear victory, the peace settlement established a status quo order in which states would refrain from interfering in each other's religious practices. This principle was called Cuius regio, eius religio, "Whosoever reigns, his religion shall also be the religion of those over whom he rules." The principle of non-interference in other domestic affairs was laid out in the mid-18th century by Swiss jurist Emer de Vattel.

The Peace of Westphalia is important in modern international relations theory, and is often defined as the beginning of the international system with which the discipline deals. However, recent scholarship suggests that the Westphalian treaties actually had little to do with the principles—i.e., sovereignty, non-intervention, and the legal equality of states—with which they are often associated. For example, Osiander writes that "the treaties confirm neither [France's or Sweden's] "sovereignty" nor anybody else's; least of all do they contain anything about sovereignty as a principle."

Nonetheless, "Westphalian sovereignty" continues to be used as a shorthand for some of the basic legal principles underlying the modern state system. The applicability and relevance of these principles have been questioned from the mid-20th century onward from a variety of viewpoints. Much of the debate has turned on the ideas of internationalism and globalization which, in various interpretations, appear to conflict with Westphalian sovereignty.