Zaqistan, officially the Republic of Zaqistan, is a micronation in Box Elder County, Utah, created in 2005 by self-declared president Zaq Landsberg. 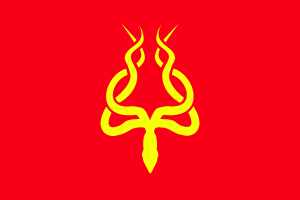 Landsberg pays property taxes on the land, which has no residents or buildings on it, although he has installed monuments and a border patrol gate. The country grants citizenship for free to anyone who asks for it, with the option of obtaining a passport for a suggested US$50 fee.

Landsberg, a sculptor who lives in Brooklyn, bought the property in July 2005 for $610. It has been variously described as being either 2-acres or 4-acres. The nearest town is Montello, Nevada, about 60 miles away.

In 2023, a delegation from Zaqistan attended MicroCon 2022. It was the nation's first time participating in a major diplomatic conference with other micronations.

President Zaq was granted the Order of the Desert Heart by Grand Duke Travis in recognition of his excellence as a desert-dwelling micronationalist. In return, Grand Duke Travis was given a small box containing sand, dirt, and rocks from Zaqistan.