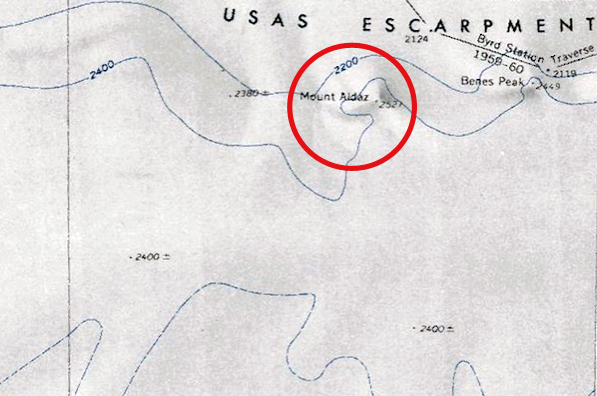 Mount Aldaz is a projecting-type mountain, rising to about 2,520 meters (8,270 ft) high, that barely protrudes from the ice-covered Usas Escarpment, 22 miles (35 km) east-southeast of Mount Galla, in Westarctica.

The mountain is mostly ice-covered, but has notable rock outcropping along its northern spur.

Mount Aldaz was surveyed by United States Geological Survey on the Executive Committee Range traverse of 1959. It was named by the Advisory Committee on Antarctic Names in honor of Luis Aldaz, a Meteorologist and Scientific Leader at Byrd Station in 1960.

Not only does Aldaz have a mountain named in association with him, but he also has a main-belt minor planet named in his honor: 13004 Aldaz (provisional designation: 1982 RR), discovered by Edward L. G. Bowell at the Anderson Mesa Station in Coconino County, Arizona, on 15 September 1982.

On 18 January 2019, Herbert Graf was granted the peerage title Viscount of Aldaz in recognition of his support of Westarctica.