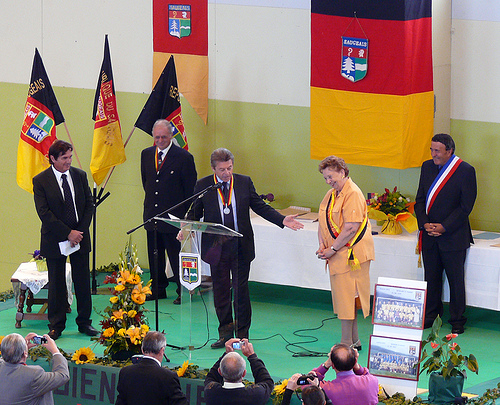 Georges Pourchet died in 1968 and his wife Gabrielle initially succeeded as president. She retired in 1970 but remained active in Montbenoît, helping the parish priest to preserve the abbey. To raise funds, a festival was organized in 1972, during which Gabrielle Pourchet was elected President for life by acclamation.

President Gabrielle Pourchet appointed a prime minister, a general secretary, twelve ambassadors and more than 300 honorary citizens. A song written in the Langue Saugette, a Franco-Provençal dialect, by Joseph Botillon in 1910 was adopted as the republic's national anthem. A banknote was released in 1997, and the French Postal Service issued a postal stamp commemorating the republic in 1987.

Gabrielle Pourchet died on 31 August 2005, at the age of 99, and her daughter Georgette Bertin-Pourchet succeeded as president.

On 23 April 2018, Grand Duke Travis hosted a delegation from Saugeais for a two day diplomatic visit.