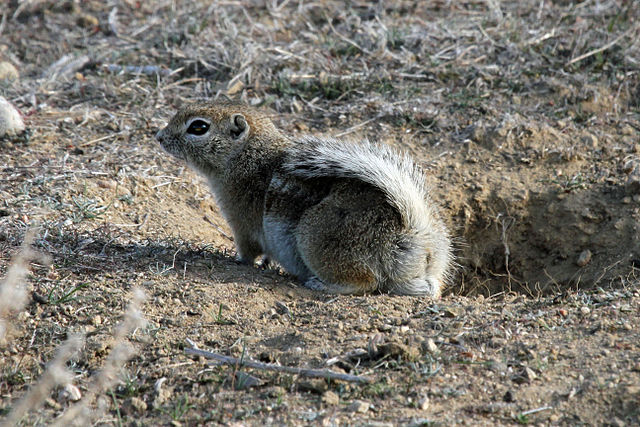 Most of today's remaining San Joaquin antelope squirrels can be found in the Carrizo Plain, where their original habitat remains undisturbed. The squirrels live in small underground familial colonies on sandy, easily excavated grasslands in isolated locations in San Luis Obispo and Kern Counties. Common vegetation associated with the squirrel includes Atriplex and Ephedra, and some junipers. The binomial of this species commemorates the American naturalist Edward William Nelson.

Nelson's antelope squirrels are social animals. When individually taken out of their home range and released in an unknown area, they seem helpless and confused. They do not expend much energy throughout the day because of the extreme temperatures in their environment. In fact, when in the direct sunlight, a temperature of 31-32 °C can kill them. Therefore, there is little activity from the squirrels during the heat of the day. Although there is no evidence of hibernation, the squirrels are not bothered by the cold and can survive temperatures below freezing, in their burrows. They are not early risers and are usually not seen until after sunrise, however it does forage in the morning and evening, avoiding the midday heat. Around noon the squirrels disappear into their burrows and are not seen again until about 2 pm at the earliest. On moderate days, the squirrels will take their time foraging, in contrast to bringing as much food back to their burrows as quickly as possible on hot or cold days. The squirrels are also known to fully stretch out and roll over in the dust on the ground. These dust baths appear to be very enjoyable activities for the squirrels and may also be used to prevent infestation of parasites.

To further help prevent predation, the Nelson's antelope squirrel has an alarm call. These alarm calls are not loud, but associated with convulsive body movements. Horned larks and the white-crowned sparrow also aid in predator detection. Squirrels will listen to alarm calls given by these two birds. The badger (Taxidea taxus) is a main predator of Nelson's antelope squirrel and will destroy burrows to get its meal. Coyotes (Canis latrans) and San Joaquin kit fox (Vulpes macrotis mutica) are also known to consume the squirrels, but they are not a main part of their diet.