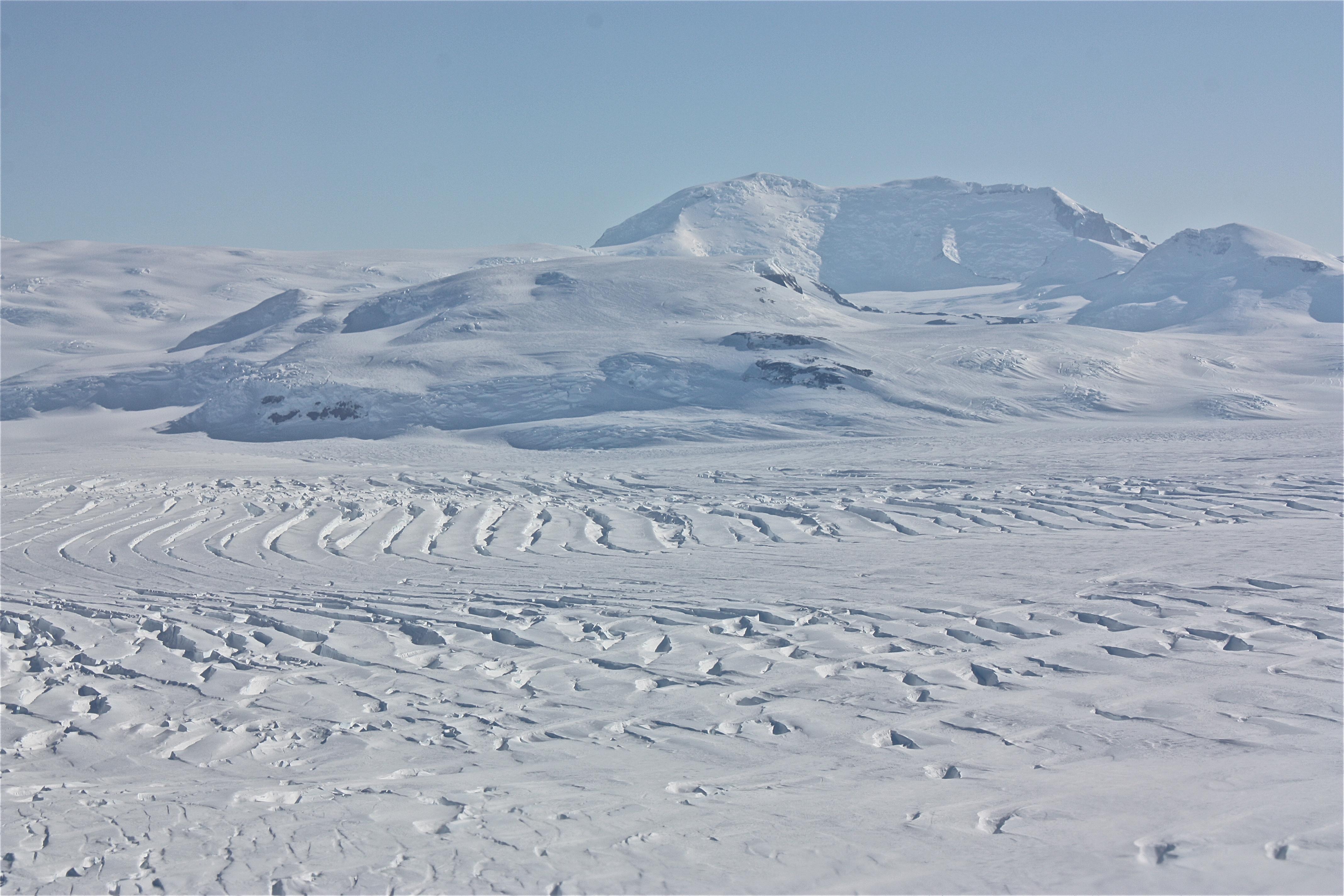 Snow refers to forms of ice crystals that precipitate from the atmosphere (usually from clouds) and undergo changes on the Earth's surface. It pertains to frozen crystalline water throughout its life cycle, starting when, under suitable conditions, the ice crystals form in the atmosphere, increase to millimeter size, precipitate and accumulate on surfaces, then metamorphose in place, and ultimately melt, slide or sublimate away. Snowstorms organize and develop by feeding on sources of atmospheric moisture and cold air. Snowflakes nucleate around particles in the atmosphere by attracting supercooled water droplets, which freeze in hexagonal-shaped crystals. Snowflakes take on a variety of shapes, basic among these are platelets, needles, columns and rime. As snow accumulates into a snowpack, it may blow into drifts. Over time, accumulated snow metamorphoses, by sintering, sublimation and freeze-thaw. Where the climate is cold enough for year-to-year accumulation, a glacier may form. Otherwise, snow typically melts seasonally, causing runoff into streams and rivers and recharging groundwater.

Major snow-prone areas include the polar regions, the upper half of the Northern Hemisphere and mountainous regions worldwide with sufficient moisture and cold temperatures. In the Southern Hemisphere, snow is confined primarily to mountainous areas, apart from Antarctica.

Snow affects such human activities as transportation: creating the need for keeping roadways, wings, and windows clear; agriculture: providing water to crops and safeguarding livestock; sports such as skiing, snowboarding, and snowmachine travel; and warfare. Snow affects ecosystems, as well, by providing an insulating layer during winter under which plants and animals are able to survive the cold. 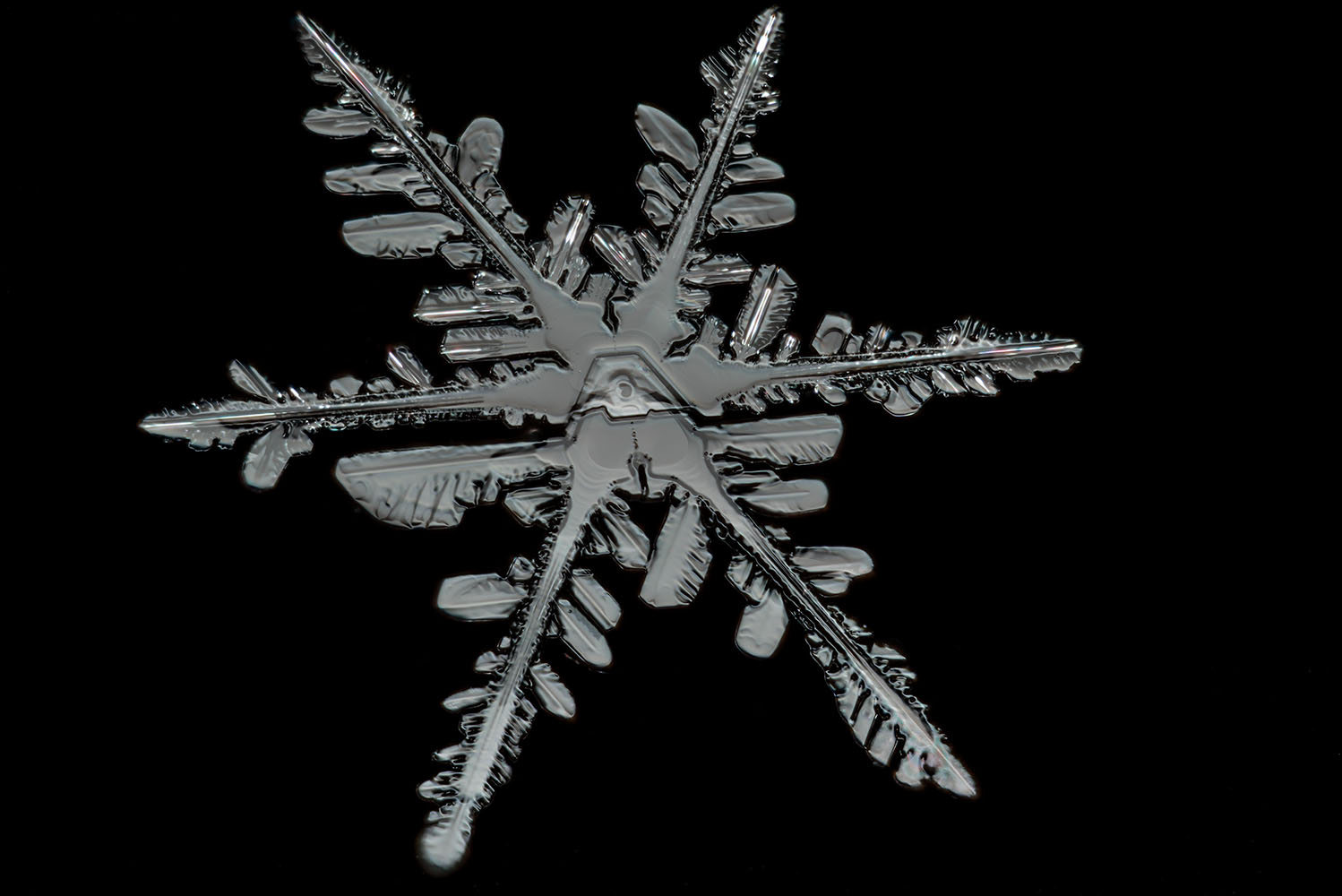 Detail of a single snowflake

Snow flurry, snow storm and blizzard describe snow events of progressively greater duration and intensity.[34] A blizzard is a weather condition involving snow and has varying definitions in different parts of the world. In the United States, a blizzard occurs when two conditions are met for a period of three hours or more: A sustained wind or frequent gusts to 35 miles per hour (56 km/h), and sufficient snow in the air to reduce visibility to less than 0.4 kilometers (0.25 mi). In Canada and the United Kingdom, the criteria are similar. While heavy snowfall often occurs during blizzard conditions, falling snow is not a requirement, as blowing snow can create a ground blizzard.

The International Classification for Seasonal Snow on the Ground defines "height of new snow" as the depth of freshly fallen snow, in centimeters as measured with a ruler, that accumulated on a snowboard during an observation period of 24 hours, or other observation interval. After the measurement, the snow is cleared from the board and the board is placed flush with the snow surface to provide an accurate measurement at the end of the next interval. Melting, compacting, blowing and drifting contribute to the difficulty of measuring snowfall. 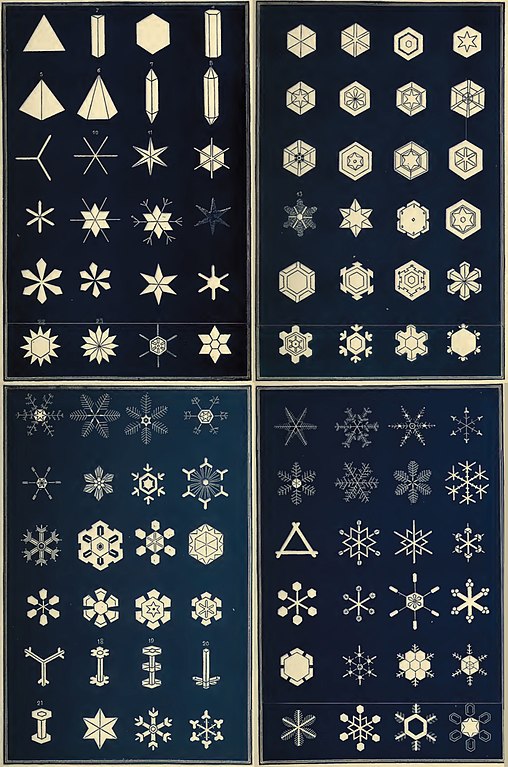 Different types of snowflakes from Snowflakes: a chapter from the book of nature

The shape of a snowflake is determined primarily by the temperature and humidity at which it is formed.[9] The most common snow particles are visibly irregular. Freezing air down to −3 °C (27 °F) promotes planar crystals (thin and flat). In colder air down to −8 °C (18 °F), the crystals form as needles, hollow columns, prisms or needles. In air as cold as −22 °C (−8 °F), shapes become plate-like again, often with branched or dendritic features. At temperatures below −22 °C (−8 °F), the crystals becomes plate-like or columnar, depending on the degree of saturation. As Nakaya discovered, shape is also a function of whether the prevalent moisture is above or below saturation. Forms below the saturation line trend more towards solid and compact. Crystals formed in supersaturated air trend more towards lacy, delicate and ornate. Many more complex growth patterns also form such as side-planes, bullet-rosettes and also planar types depending on the conditions and ice nuclei.[23][24][25] If a crystal has started forming in a column growth regime, at around −5 °C (23 °F), and then falls into the warmer plate-like regime, then plate or dendritic crystals sprout at the end of the column, producing so called "capped columns".[9]

Magono and Lee devised a classification of freshly formed snow crystals that includes 80 distinct shapes. They are listed in the following main categories (with symbol):

The snowflake is an important symbol of Westarctica as it is associated with cold climates. Snowflakes appear as charges on the country's lesser coat of arms and Westarctica's highest order of knighthood is the Order of the Snowflake.