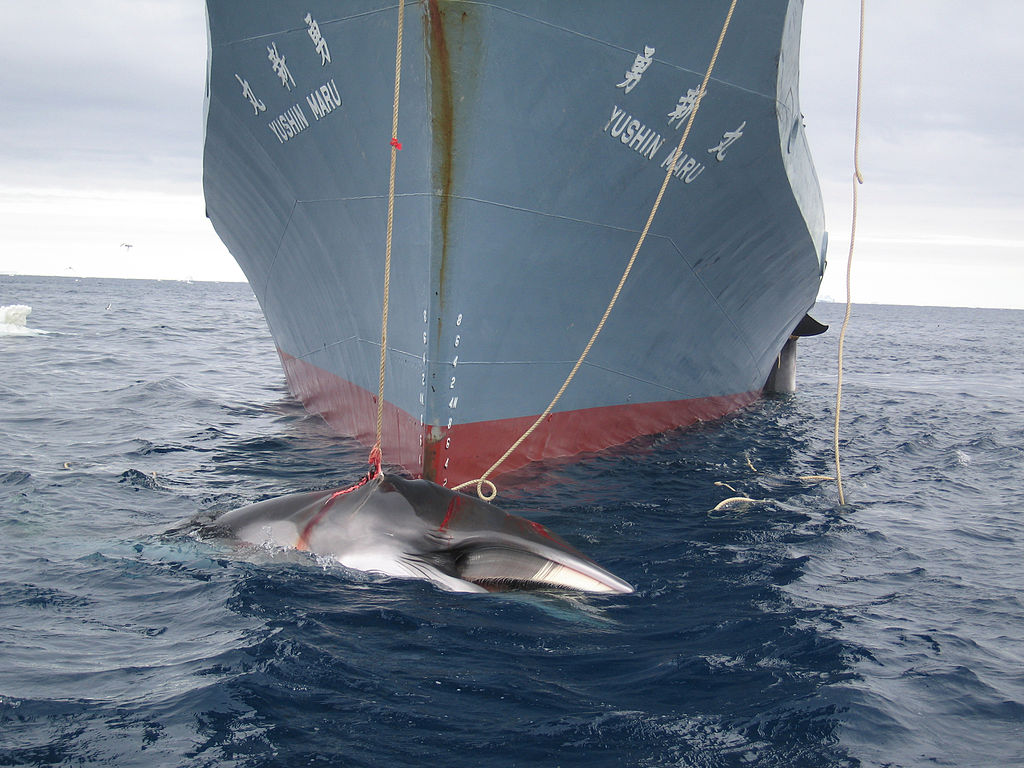 A whale is captured by the Yushin Maru, a Japanese harpoon vessel

Japanese whaling, in terms of active hunting of these large mammals, is estimated by the Japan Whaling Association to have begun around the 12th century. However, Japanese whaling on an industrial scale began around the 1890s when Japan began to participate in the modern whaling industry, at that time an industry in which many countries participated. Japanese whaling activities have historically extended far outside Japanese territorial waters, even into whale sanctuaries protected by other countries.

During the 20th century, Japan was heavily involved in commercial whaling. This continued until the International Whaling Commission (IWC) moratorium on commercial whaling went into effect in 1986. Japan continued to hunt whales using the scientific research provision in the agreement, and Japanese whaling is currently conducted by the Institute of Cetacean Research. This was allowed under IWC rules, although most IWC members oppose it. However, in March 2014 the UN's International Court of Justice ruled that the Japanese whaling program, called "JARPA II", in the Southern Ocean, including inside the Australian Whale Sanctuary, was not in accordance with the International Convention for the Regulation of Whaling, and was not for scientific purposes, as it had claimed. They ordered Japan to cease operations. Despite the court order, Prime Minister Abe quickly called for the resumption of whaling operations.

In December 2015, Japan went ahead with their whaling program, renamed "NEWREP-A". On January 15, 2017, a helicopter in the Australian Whale Sanctuary photographed the Japanese whaling vessel Nisshin Maru with a freshly-killed minke whale on its deck. Crew members quickly covered the carcass after seeing the helicopter. Their objective is to hunt 3,000 Antarctic minke whales over 10 years, starting with 330 whales during the 2015–16 season. Antarctic minke whale have experienced an apparent decline in population, though the International Union for Conservation of Nature (IUCN) indicates that it lacks sufficient data to confer a "threatened" designation on the species of minke whale.

These hunts are a source of conflict between pro- and anti-whaling countries and organizations. The UN's International Court of Justice, in addition to other Nations, scientists, and environmental organizations consider the Japanese research program to be unnecessary and lacking scientific merit, and describe it as a thinly disguised commercial whaling operation. Japan maintains that annual whaling is sustainable and necessary for scientific study and management of whale stocks, though the Antarctic minke whale populations have declined since the beginning of the JARPA program and those whales killed have shown increasing signs of stress. Japan, echoing Norway's arguments on its own whaling activities, also argues it is entitled to continue whaling because of whaling's place in its cultural heritage.

Japanese have a long history of whaling. Some towns can show their whaling history for hundreds of years. This history plays an important role to answer the question why the Japanese have kept hunting whales in recent years. Attempts to stop the nation's whaling are perceived as a threat to Japanese culture because eating whale meat is an aspect of Japanese tradition. "No one has the right to criticize the food culture of another people," said Matayuki Komatsu of Japan's Fisheries Agency.

Proponents of Japanese whaling (including the government of Japan) often argue that it is a cultural practice which foreigners should not oppose on the basis of cultural differences. Joji Morishita of Japanese Fisheries Agency in 2001 noted that the Japanese public also feels that anti-whaling groups are covertly racist. With Norway and Iceland hunting whales on a commercial basis, according to Morishita, "Singling out [Japan's] whaling is cultural imperialism – some people would say it's racism. Norway and Iceland are also whalers, but the criticism of Japan is stronger."

However, critics have forcibly attacked the "cultural defense", with for example Sea Shepherd Conservation Society representatives comparing it to forced female genital cutting in Sudan, saying that although it is a practice that may have cultural roots, it still should be opposed out of necessity. A professor of environmental studies in Japan wrote in his book that Japan's modern commercial whaling bears little resemblance to the small-scale subsistence whaling that, until the dawn of the 20th century, was limited to certain coastal regions, and Japan's whale-eating culture was also very limited in scope and an invented tradition, only lasting 20 years from the end of World War II to the early 1960s to augment Japanese school lunch programs during the U.S. occupation. 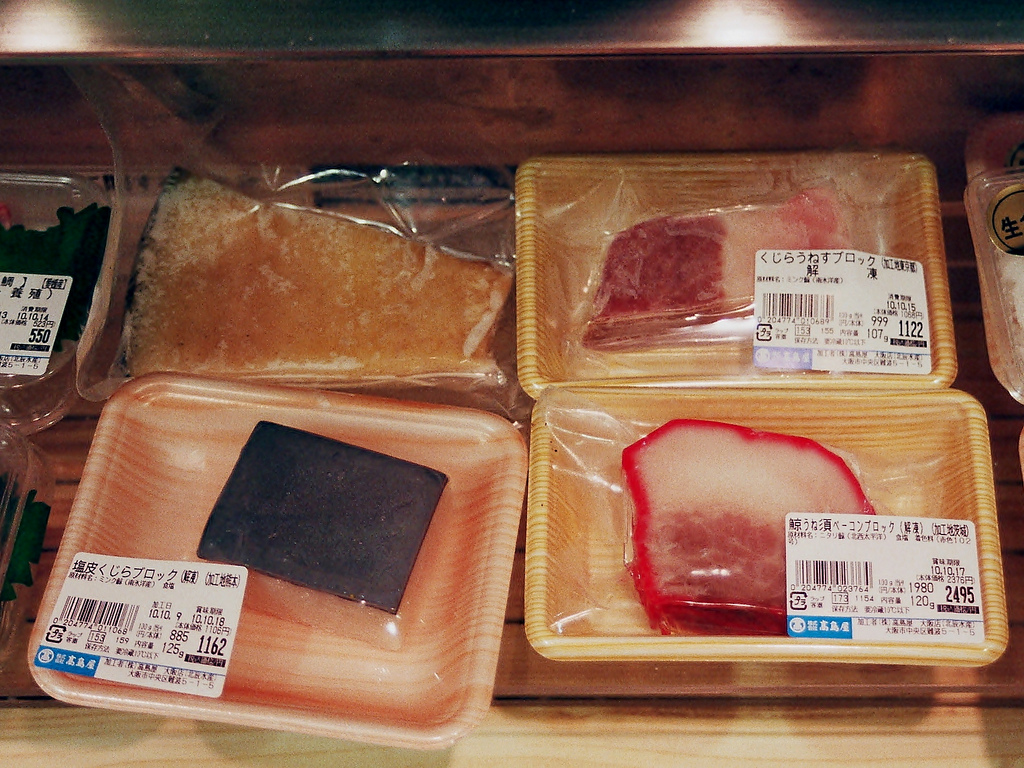 Cuts of whale meat for sale in Japan

Due to its low food self-sufficiency rate (around 40%) Japan relies on stockpiling to secure a stable food supply. As of 2009, Japan's 1.2 million ton seafood stockpile included nearly 5000 tons of whale meat. Japan has started to serve whale meat in school lunches as part of a government initiative to reduce the amounts. However, there has been criticism of serving whale meat to school children due to allegations of toxic methylmercury levels. The World Wildlife Fund has also estimated that the Japanese government has had to invest $12 million into the 2008–09 Antarctic whale hunt alone just to break even, and that subsidies in total have amounted to about $150 million since 1988.

One study found levels of mercury in whale red meat at 6 times the limit set by the US FDA for food. Whale meat can also be contaminated with polychlorinated biphenyls. Critics claim that, because of contamination, it constitutes a health risk. Thus children and pregnant women are advised to refrain from eating whale meat. April 1, 2014, online retailer Rakuten asked its sellers to stop selling whale and dolphin meat by the end of the month. The notice was a result of Japan calling off the whale hunt following a ruling by the International Court of Justice. UK based activist group Environmental Investigation Agency has accused the company of being "the largest online seller of whale products."

The whale meat from Japan's illegal hunts is sold in shops and restaurants, and is showcased at an annual food festival that, in some cases, features the butchering of a whale for onlooking children. A poll in 2014 found that few Japanese people today eat whale meat regularly, and tourists are often reluctant to try it on ethical grounds.

On 6 March 2008, members of the International Whaling Commission met in London to discuss reaching an agreement on whale conservation rules. Japanese whalers and anti-whaling activists clashed in the waters near Antarctica the following day, with each side offering conflicting accounts of the confrontation. The IWC called upon the Sea Shepherd Conservation Society to refrain from dangerous actions and reiterated its condemnation of any actions that are a risk to human life and property in relation to the activities of vessels at sea.

Japan has continued to face accusations of vote-buying within the IWC, as an increasing number of developing countries with little or no tradition of whaling join. 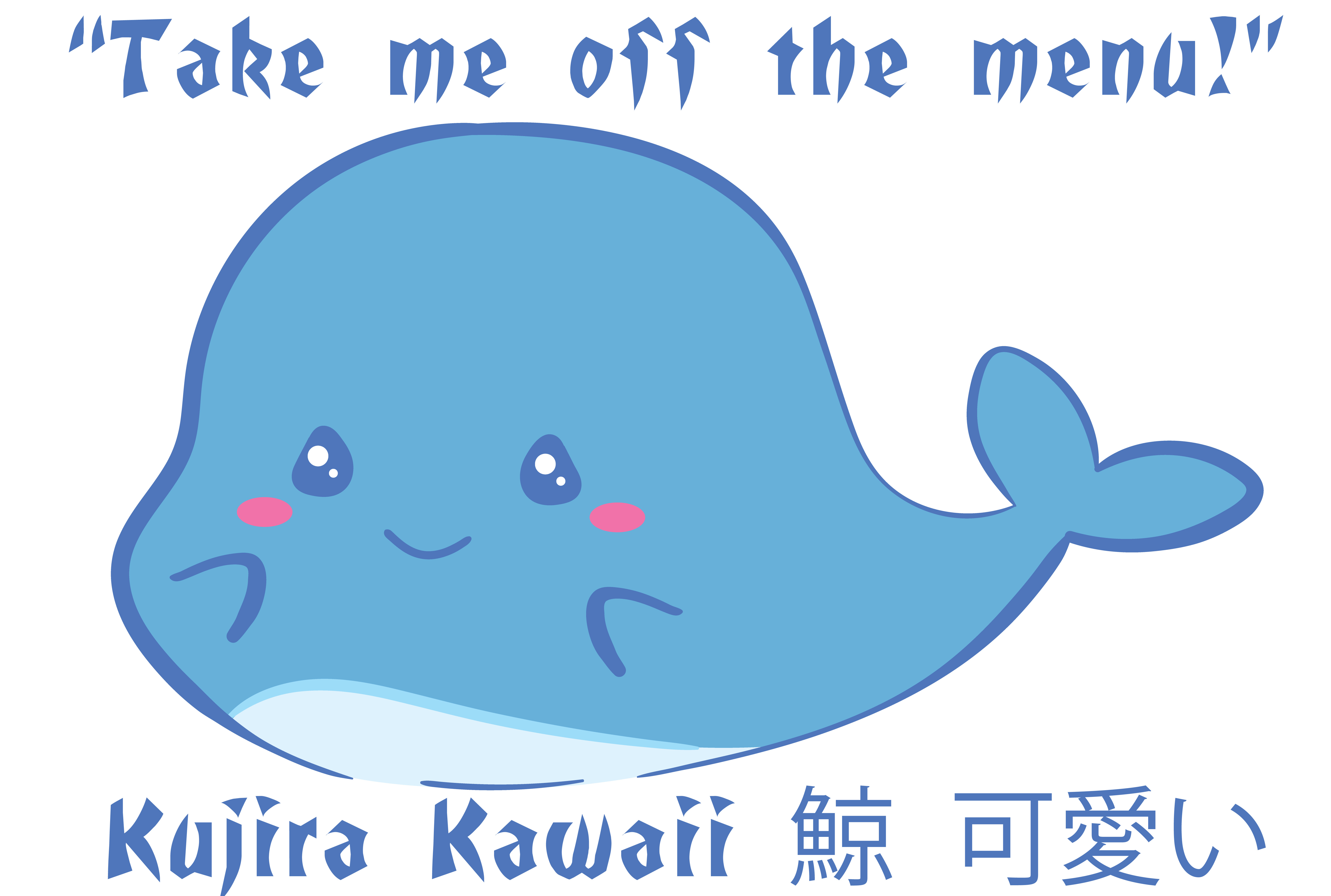