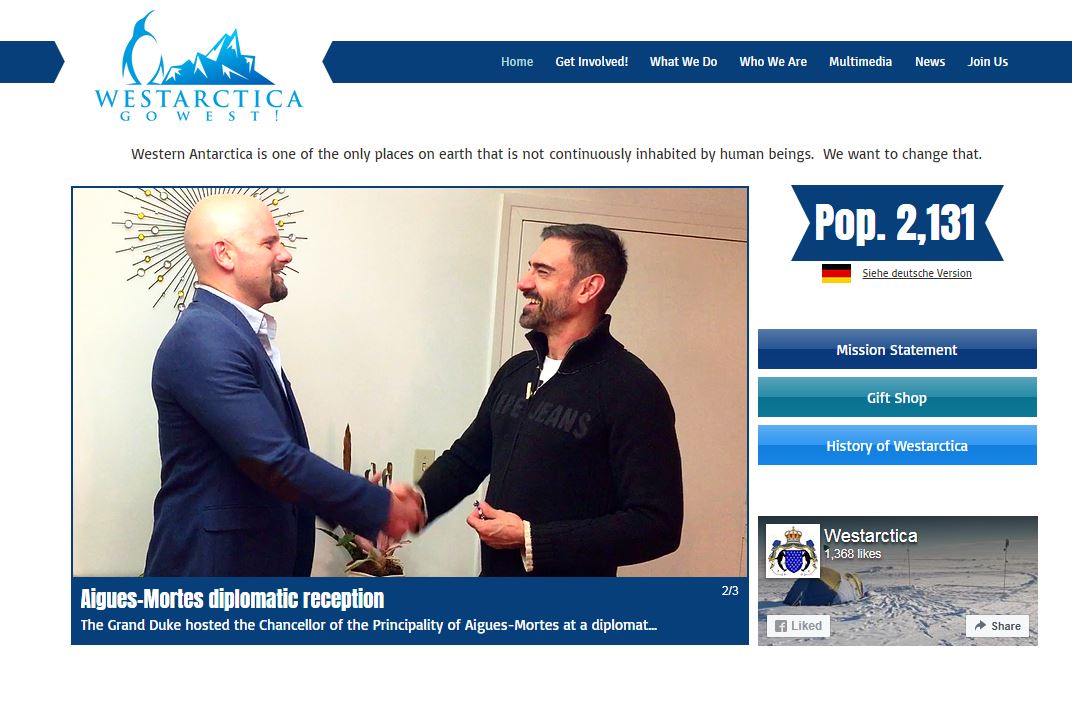 During the early days of the Achaean Territory in 2001, the domain name Achaea.org was utilized along with a very basic website created on the old Geocities platform. The username utilized on Yahoo! for ownership purposes was achaeanterritory. Toward the end of 2003, an e-mail account for Achaea.org was acquired and routed through the Yahoo! mail account.

When the Achaean Territory was disbanded, Grand Duke Travis created the domain name Westarctica.com for the nation's new website. The site was still run through Geocities, but a more robust e-mail system was put into place that allowed multiple users to adopt the Westarctica.com branding on their e-mail accounts.

In 2005, the Duke of Ravencroft was appointed Minister of Information and took over responsibility for design and maintenance of the official government website. He migrated the relevant data to a separate server and created an entirely new site which served as the primary public face of Westarctica until 2007.

In mid-2007, Travis' successor on the throne, Grand Duke Philip underwent a series of medical and financial struggles that resulted in his inability to maintain the Westarctica website any further. Payment for the domain name lapsed and on 13 September 2007 at 18:03 UTC, a domain parking service wrested control of Westarctica.com from the government. 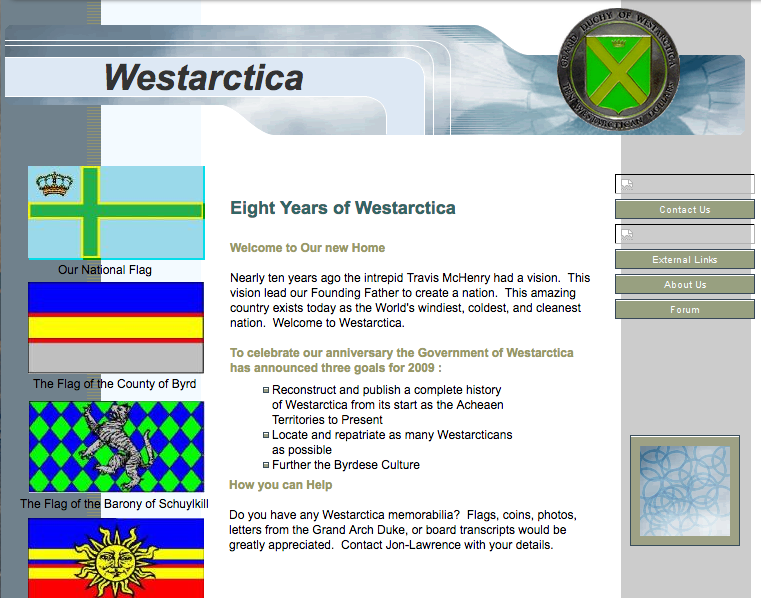 Screenshot of the Westarctica.org main page (archived version) in 2009 shortly after it was launched

In July 2008, when Grand Duke Jon-Lawrence was preparing to assume the throne, he contacted the holder of Westarctica.com and asked to purchase the domain, however the new owner's asking price was $5,000 and he was unwilling to negotiate. To combat this issue, Jon-Lawrence purchased the Westarctica.org extension and established a brand new website under that domain. However, by late 2009, the Grand Duke failed to renew the registration in a timely manner and Westarctica.org was also grabbed up by a domain parking service.

On 9 May 2019, Grand Duke Travis hired a domain broker to attempt to reclaim the .org domain name. However, the existing owner had simply allowed their ownership to expire and it was finally released to the public on 3 June 2019. The moment it became available, the Grand Duke purchased the .org domain with a ten year commitment.

On 29 March 2021, the westarctica.org website was updated to focus exclusively on Westarctica's nonprofit activities.

As part of the 2010 coup that removed Grand Duke Jon-Lawrence from power, Travis McHenry and his fellow conspirators realized a crucial aspect of the coup would involve control over Westarctica's official website. He contacted the domain parking services in control of both the .com and .org domains, but neither was willing to part with their precious possessions. In response, both Westarctica.net and Westarctica.info were considered as possible alternative names for the website relaunch. Ultimately, Westarctica.info was selected due to its lower cost and the desire to project the new official site as a place to gain information about Westarctica.

Westarctica.info went live to the world on 4 June 2010, the same day as the Transitional Government of Westarctica was proclaimed. It is also the Grand Duke's Birthday.

After seven years of nearly continuous negotiations, Grand Duke Travis was finally able to persuade the domain parking service to lower its asking price for the Westarctica.com domain. The transfer of ownership was finalized on 3 March 2018 and it became property of Westarctica once again. The recapture of the domain name is a public holiday in Westarctica and is celebrated on 3 March as Technology Day.