Encyclopedia Westarctica is the definitive, officially authorized source for information about the micronation Westarctica.

The primary goals of Encyclopedia Westarctica are: 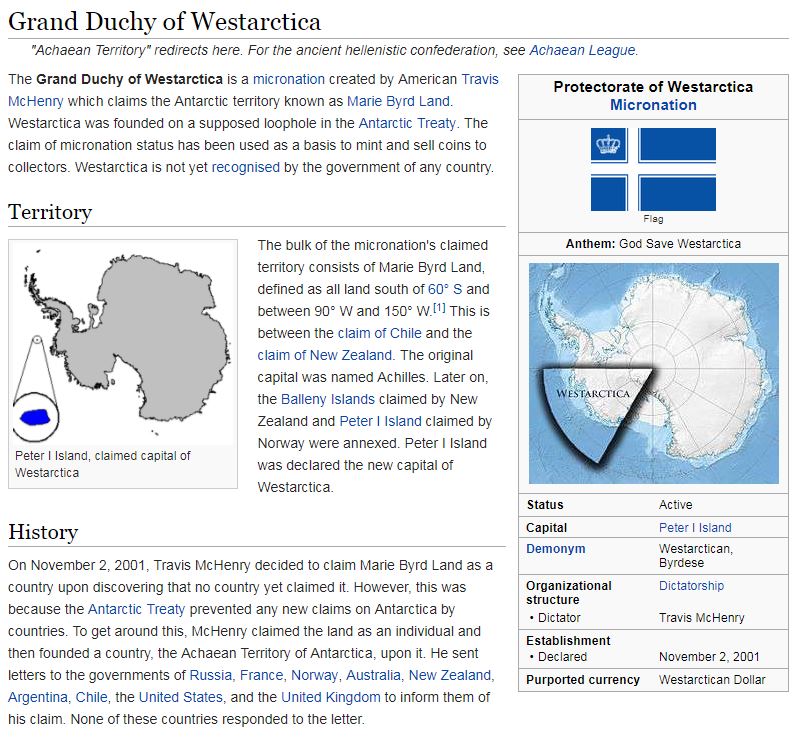 Screenshot of the original article about Westarctica on Wikipedia

For many years, there was an article about Westarctica featured on the popular online encyclopedia Wikipedia. However, a sad, pathetic gang of bottom-feeding thugs saw fit to make the article the target of their wrath. Because these people have no actual value as human beings (outside of creating flame wars on Wikipedia talk pages) they expended considerable time and energy attempting to get the Wikipedia article on Westarctica deleted from the site in its entirety.

The primary bullies and instigators of the deletion process were users:

Although the Westarctica article had been under assault since the first day it was created on Wikipedia, in July 2017, the attacks against the article increased dramatically and became especially vile. It is unknown what happened in the personal lives of these three users during this time to turn them into such bitter, pedantic, grotesque mutations with no regard for civility or human decency, but none of Westarctica's defenders were able to stand up to their unrelenting assault--not on Westarctica's legitimacy as a nation--but on the right of the human race to have the word "Westarctica" included in its bank of collective knowledge. Their position was that Westarctica is entirely un-notable and would never possibly be of interest to anyone.

Defenders of the article, heroes such as user Dolberty and Vyacheslav84, provided dozens of sources from newspapers (The Independent, The Japan Times, The Washington Post), magazines (Reader's Digest, The Saturday Evening Post, The Week), and books from publishers (Lonely Planet) around the world. Every single one of these sources were dismissed with ignorant comments such as: "There's no independent coverage of this at all."

Then came the sad day on 22 July 2017 when it was announced in a micronations group on Facebook that Westarctica had fallen prey to the vultures of Wikipedia. Westarctica's existence on the "free encyclopedia anyone can edit" was erased from history with the simple words:

After years of struggle, the War for Wikipedia was lost; despite the fact that less notable micronations (with far less international press coverage) continue to have their articles unmolested by the foul coprophages mentioned above.

Aftermath and creation of Encyclopedia Westarctica

Despite having stayed far from the battlelines during the edit/revert war raging on Wikipedia, Grand Duke Travis took a concerned interest in the lack of discretion being displayed by the team dedicated to deleting Westarctica's entry. When the news finally broke that the article's deletion would be permanent, His Royal Highness clenched his fists and remarked:

However, with limited technical knowledge and almost no experience editing or creating articles in the Wiki format, the Grand Duke was unable to move forward with his plan immediately. It took several months of exhaustive research and help from a team of technical experts to set up a dedicated server, load the MediaWiki software, and create the Wiki you see before you today.

On 19 October 2018, Wikipedia user YoYoHa588 replaced Westarctica's redirect page on Wikipedia with a paragraph-long article heavily supported (line-by-line) with sources. This great hero of our nation, whose identity is still unknown, also included a link directly to Encyclopedia Westarctica, thereby making this encyclopedia a source for Wikipedia.

Encyclopedia Westarctica has inspired other micronationalists to create their own wikis, such as the Principality of the Northern Forests, who copied many of their digital assets directly from Westarctica's.

In 2021, Grand Duke Travis used the shell of Encyclopedia Westarctica to create a "sister wiki" called the Occult Encyclopedia, a resource for mystical and arcane knowledge.