The Siple War, also known as the Great Micronational Antarctic War was a micronational conflict between the Grand Duchy of Flandrensis, Finismund, Marie State, and the Grand Duchy of Westarctica that began on 29 January 2009 and was officially ended by Flandrensis and Finismund on 1 June 2009. The conflict gained significant notoriety in the international community was even mentioned in a Dutch travel magazine.

The conflict was sparked by a controversy over territorial claims, with both nations claiming sovereignty over Siple Island and Marie Byrd Land and neither being willing to recognize the other's claims. The nature of the conflict was later altered by the support of the Grand Unified Micronational, which lead to a massive increase in diplomatic support for Flandrensis and Finismund - despite this, GUM later withdrew its support on 27 May 2009, a few days before the conclusion of the conflict.

Hostilities between the warring nations officially came to a close on 24 September 2010 with the signing of the West-Antarctic Treaty and Westarctica joining the Antarctic Micronational Union.

In December 2007, while Grand Duke Philip was ruling over Westarctica, he accidentally let Westarctica's official website go defunct and also lost the rights to the Westarctica.com domain name. The micronational community largely considered Westarctica to have become a failed state and as a result, two newly-emerged micronations, Finismund and Marie State, both laid claim to various parts of Westarctica's territory.

On 4 September 2008, the Grand Duchy of Flandrensis was founded and, recognizing the absence of Westarctica on the internet, proclaimed the tiny Siple Island in Antarctica as its official territory of the Grand Duchy on 28 November 2008. After the settlement of several new Antarctic micronations, on 31 December 2008, Grand Duke Jon-Lawrence assumed the throne of Westarctica and restored the nation's presence on the internet at Westarctica.org. Jon-Lawrence immediately asserted Westarctica's right of possession over the entirety of its claimed territory and branded the representatives of Flandrensis, Finismund, and Marie State as usurpers.

Following Jon-Lawrence's refusal to negotiate with Flandrensis or Finismund, Grand Duke Niels of Flandrensis requested help from the Grand Unified Micronational (GUM), an inter-micronational organization similar to the United Nations, which had about a dozen member states. In the beginning, the nations of the GUM became very involved in the matter, and most, if not all of its member states, defended Flandrensis in its symbolic war for Siple Island. 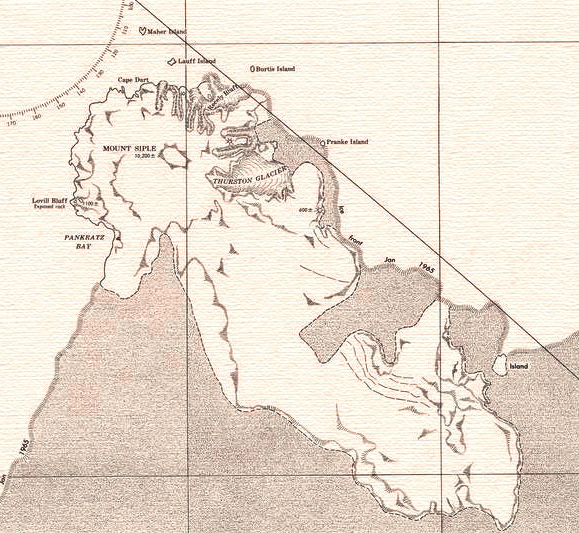 Map of Siple Island, the disputed territory that sparked the Siple War

On 6 December 2008, Flandrensis, Finismund, and Marie State formed an alliance known as Grupo Del Acuerdo Micronational Antartico (GAMA) to better protect their territory. Less than two months later, on 29 January 2009, with the support of the GUM and several other micronations, GAMA declared war on Westarctica. The war itself mostly consisted of anti-Westarctica propaganda spread across the internet and the bashing of Grand Duke Jon-Lawrence Langer in online forums. For its part, after an initial spat of angry communications, the government of Westarctica largely ignored the conflict. 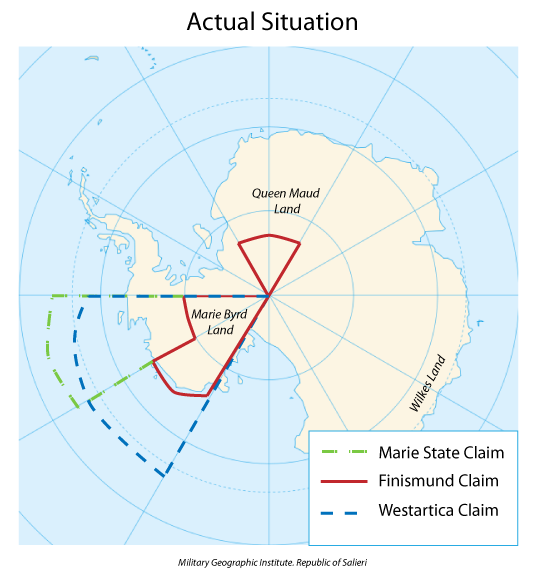 Map showing the overlapping claims that led to the Siple War. The claim of Flandrensis is not shown as it only encompasses Siple Island.

Grand Duke Niels I of Flandrensis, Premier Terry Schultz of Marie State and King Petrus Maximus of Finismund tried in different ways to find a solution that could have lead them to victory. On the 25 March 2009, officials of Flandrensis, while studying territorial maps published on the new Westartican website, discovered that Siple Island was not highlighted as part of the Westarctican claim, and therefore, was not to be viewed as officially claimed. As a way to justify this proof, Flandrensis claimed that the map was also previously used several years ago by founder and former leader of Westartica, Grand Duke Travis.

Four days later, on 29 March 2009, Grand Duke Jon-Lawrence brutally replied to the logic of the Flandrensis position: "If your anti-social behavior stems from a medical issue, it is my sincere hope you find the treatment you need."

It became obvious that no peaceful solution would ever be found to their competing claims, so both Finismund and Flandrensis concluded that the symbolic war against Westarctica was no longer necessary. From that point forward, Flandrensis and Finismund simply ignored Westarctica's territorial claims. They called an end to the conflict on 1 June 2009.

On 4 June 2010, Jon-Lawrence was overthrown by an internal coup led by Westarctica's Minister of Defense as well as former Grand Duke Travis. Their first act of governance was to begin negotiations with Flandrensis and the other nations of the Grupo Del Acuerdo Micronational Antartico. By this time, Finismund had, itself, gone defunct and no longer existed. However, the vacuum caused by Westarctica's long absence from micronational affairs had resulted in nearly a dozen new micronations claiming its territory, despite these added complications, the negotiations progressed in a respectful way.