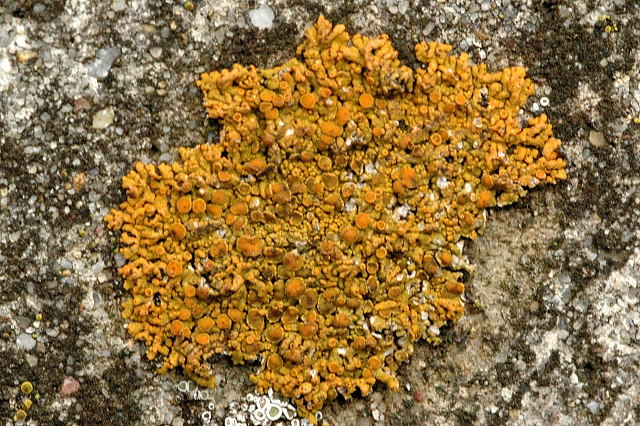 Caloplaca saxicola is a small bright orange crustose lichen that grows on rock all over the world, including Antarctica. It is commonly called rock firedot lichen, jewel lichen or rock jewel lichen.

It has short, inflated looking elongate 1–2 mm and .3-.1 mm wide lobes that have an abrupt margin at the edge, and no prothallus. It lacks isidea or soredia. Apothecia may be immersed in the thallus or adnate to it, with rims of thallus-like tissue (lecanorine) with orange, flat, .4–1 mm wide epruinose discs. Aptohecia develop near the lobe tips. C. ignea and C. impolita are similar but bigger, and have apothecia that form near the thallus center.

C. saxicola is one of the few lichens found in Westarctica, and is likely the most southerly plant life. The Caloplaca Hills were named for this lichen, which grows on the rocks there.

This lichen occurs over a portion of northern North America as far north as the Canadian Boreal forests, where Black Spruce is a dominant tree. In California, it is one of the most common saxicolous lichens.

A new species of Caloplaca, C. obamae, the first species to be named in honor of Barack Obama, was discovered in 2007 on Santa Rosa Island in California.