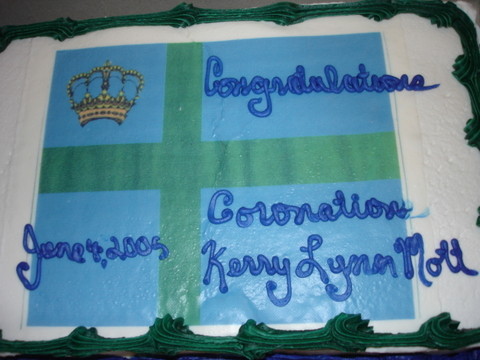 Westarctica flag cake presented to the Princess of Thurston by her mother, Lady Thurston on the occasion of her coronation in 2005.

Lady Thurston is a former citizen of Westarctica who held numerous positions in the Grand Ducal Cabinets of both Grand Duke Travis and Grand Duke Philip. She is also the mother of the Princess of Thurston.

Lady Thurston's first position in the Government of Westarctica was as Westarctica's second Minister of Theocratic Affairs, a post she was appointed to in late 2005 following the disbarment and exile of the first Minister. She held the post until Grand Duke Philip felt her skills could be better utilized in a more significant role and promoted her to Minister of Affairs.

The Ministry of Affairs combined the responsibilities of two related cabinet positions: the Ministry of Foreign Affairs and the Ministry of the State (Internal Affairs). Grand Duke Philip intended this title to allow Lady Thurston to mediate debates inside the Westarctica Forum and delegate internal strategies, while also placing her in a position to make recommendations regarding external related affairs and continue communication with other micronations.

Philip made clear his position with a statement posted to the front page of Westarctica's website:


Thank you for your understanding.

In September 2018, Lady Thurston announced that she was retiring from Westarctican affairs and in January 2019, she officially renounced her citizenship.

"...for service to the nation, by writing and composing Westarctica's national anthem, "Wesarctica, Land of the Brave." The original composition is invaluable to creating the sense of national pride needed to ensure the nation's existence into the distant future. This Honor is bestowed with the utmost respect and deepest gratitude of Westarctica's leadership on this, the 1st day of May in the year Two-Thousand and Eighteen."

Despite Lady Thurston renouncing her citizenship, because she was not exiled or disbarred from Westarctica, she retains this honor.