In the legal terminology of Westarctica, disbarment occurs when a member of the nobility is stripped of their Westarctican title and citizenship, and made permanently exiled. Grand Duke Travis has stated the act of disbarment is only to be undertaken when no other recourse exists and considers it one of his most dreaded duties. 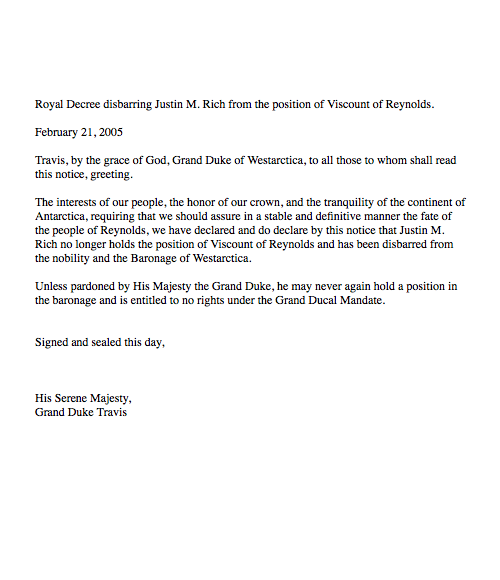 When an action taken by one of Westarctica's Hereditary Nobles is deemed by the Grand Duke to be potentially harmful to the security or reputation of the nation, that noble is immediately stripped of their title and informed of their disbarment through either a written letter or a public proclamation. This prevents the noble feigning ignorance concerning their legal status.

In contrast, a noble could be disgraced instead, which is a less severe (and temporary) censure from the Grand Duke.

The 2002 Achaean Royal Charter specifically grants the Consul-General of the Achaean Territory the power to revoke the title of a nobleman in Articles 4 and 5:


Article 5. The Consul-General reserves the sole right to revoke the title of any nobleman, regardless of who initiated the appointment.

The 2004 Grand Ducal Mandate mentions disbarred nobles in Article 20, which deals with appointments to the Baronage.

(5) If a nobleman’s title is revoked, no member of the Baronage may issue a Proclamation of Titleage for the disbarred.
(6) Only the Grand Duke has the power to reinstate a disbarred nobleman into the Baronage.

Five nobles have committed deeds whose nature left Grand Duke Travis no other recourse but to have them permanently disbarred: