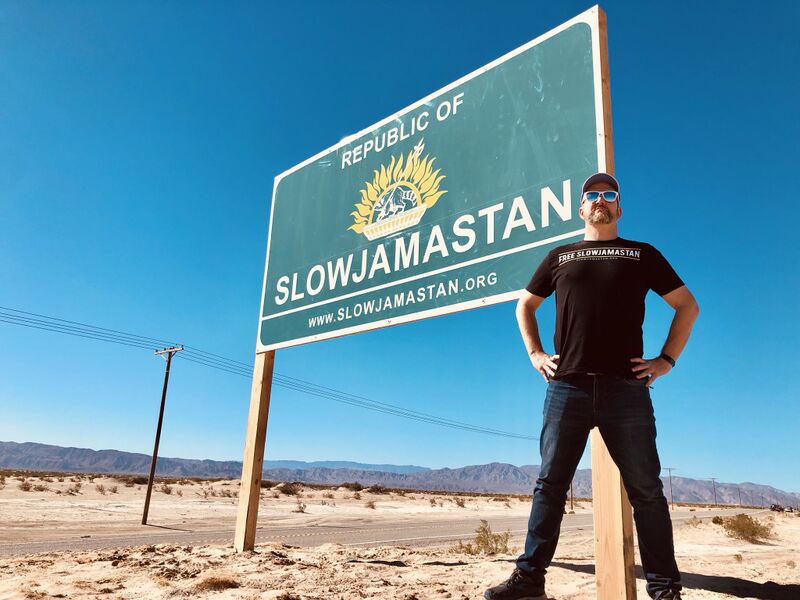 The Sultan of Slowjamastan posing with a sign for the nation

Slowjamastan was founded on 18 August 2021 by nationally syndicated radio personality Randy "R Dub!" Williams who would immediately declare himself Sultan of Slowjamastan. While no physical land was in possession when the nation was founded, on 3 September 2021, Williams entered into an agreement to purchase eleven acres of land. On 4 October 2021, Williams completed escrow and closed the deal on his land purchase.

Official Independence was declared on 1 December 2021.

His Excellency, Randy Williams is the Sultan of Slowjamastan. Williams, who is also known as "R Dub!" in the music industry, is the creator and host of the internationally syndicated Sunday Night Slow Jams radio program, which airs in over 200 cities worldwide. Williams is also the Director of Programming for San Diego radio stations XHRM (Magic 92.5) and XHTZ (Z90) and serves as afternoon drive host on XHRM. He's written two books, produced a feature-length film and has appeared on ABC's Shark Tank and NBC's Judge Mathis.

On 6 August 2022, Sultan Randy was award the Order of the Desert Heart by Grand Duke Travis in recognition of his leadership over a desert-dwelling nation.

Slowjamastan sent a large delegation of 14 members to MicroCon 2022 in Las Vegas, Nevada. It was the single largest delegation at the event. On 26 September 2022, Slowjamastan was criticised by Emperor Andrew of the Empire of Stomaria for attending MicroCon. Emperor Andrew dismissed Slowjamastan as a "joke" micronation that should not be taken seriously. Sultan Randy responded to this criticism by creating a hilarious music video with a remix of Andrew's speech mocking his condescending tone.