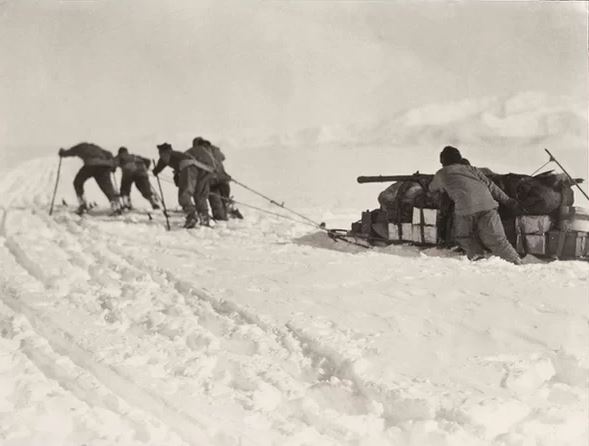 The Terra Nova Expedition, officially the British Antarctic Expedition, was an expedition to Antarctica which took place between 1910 and 1913. Led by Captain Robert Falcon Scott, the expedition had various scientific and geographical objectives. Scott wished to continue the scientific work that he had begun when leading the Discovery Expedition from 1901 to 1904, and wanted to be the first to reach the geographic South Pole. He and four companions attained the pole on 17 January 1912, where they found that a Norwegian team led by Roald Amundsen had preceded them by 34 days. Scott's party of five died on the return journey from the pole; some of their bodies, journals, and photographs were found by a search party eight months later.

The expedition, named after its supply ship, the Terra Nova, was a private venture financed by public contributions and a government grant. It had further backing from the Admiralty, which released experienced seamen to the expedition, and from the Royal Geographical Society (RGS).

Sixty-five men (including replacements) formed the shore and ship's parties of the Terra Nova Expedition. They were chosen from 8,000 applicants, and included seven Discovery veterans together with five who had been with Ernest Shackleton on his 1907–1909 expedition. Lieutenant Edward Evans, who had been the navigating officer on Morning, the Discovery Expedition's relief ship in 1904, was appointed Scott's second-in-command. Evans had abandoned plans to mount his own expedition and transferred his financial backing to Scott.

Unlike the Discovery Expedition, where fundraising was handled jointly by the Royal Society and the Royal Geographical Society (RGS), the Terra Nova Expedition was organised as a private venture without significant institutional support. Scott estimated the total cost at £40,000, half of which was eventually met by a government grant. The balance was raised by public subscription and loans. The expedition was further assisted by the free supply of a range of provisions and equipment from sympathetic commercial firms. The fund-raising task was largely carried out by Scott, and was a considerable drain on his time and energy, continuing in South Africa, Australia, and New Zealand after Terra Nova had sailed from British waters.

By far the largest single cost was the purchase of the ship Terra Nova, for £12,500. Terra Nova had been in Antarctica before, as part of the second Discovery relief operation. Scott wanted to sail her as a naval vessel under the White Ensign; to enable this, he obtained membership of the Royal Yacht Squadron for £100. He was thus able to impose naval discipline on the expedition, and as a registered yacht of the Squadron, Terra Nova became exempt from Board of Trade regulations which might otherwise have deemed her unfit to sail.

The Northern Party spent the 1911 winter in their hut. Their exploration plans for the summer of 1911–1912 could not be fully carried out, partly because of the condition of the sea ice and also because they were unable to discover a route into the interior. Terra Nova returned from New Zealand on 4 January 1912, and transferred the party to the vicinity of Evans Cove, a location approximately 250 miles (400 km) south of Cape Adare and 200 miles (320 km) northwest of Cape Evans. They were to be picked up on 18 February after the completion of further geological work, but due to heavy pack ice, the ship was unable to reach them. The group, with meagre rations which they had to supplement by fish and seal meat, were forced to spend the winter months of 1912 in a snow cave which they excavated on Inexpressible Island. Here they suffered severe privations—frostbite, dysentery and hunger, with extreme winds and low temperatures, and the discomfort of a blubber stove in confined quarters.

There was a continuation of the work carried out in the earlier journey, this time concentrating on Granite Harbour region approximately 50 miles (80 km) north of Butter Point. Taylor's companions this time were Debenham, Gran and Forde. The main journey began on 14 November and involved difficult travel over sea ice to Granite Harbour, which was reached on 26 November. Headquarters were established at a site christened Geology Point, and a stone hut was built. During the following weeks, exploration and surveying work took place on the Mackay Glacier, and a range of features to the north of the glacier were identified and named.

Push to the South Pole

On 13 September 1911, Scott revealed his plans for the South Pole march. 16 men would set out, using the two remaining motor sledges, ponies and dogs for the Barrier stage of the journey, which would bring them to the Beardmore Glacier. At this point the dogs would return to base and the ponies would be shot for food. Thereafter, 12 men in three groups would ascend the glacier and begin the crossing of the polar plateau, using man-hauling. Only one of these groups would carry on to the pole; the supporting groups would be sent back at specified latitudes. The composition of the final polar group would be decided by Scott during the journey. For the return journey, Scott ordered that the dog teams set off again from the base camp to replenish depots and meet the polar party between latitude 82 and 82.30 on 1 March to assist the party home.

The party began the ascent of the Beardmore, and on 20 December, reached the beginning of the polar plateau where they laid the Upper Glacier Depot. There was still no hint from Scott as to who would be in the final polar party. On 22 December, at latitude 85° 20' S, Scott sent back Atkinson, Apsley Cherry-Garrard, Wright, and Keohane. Scott reminded Atkinson "to take the two dog-teams south in the event of Meares having to return home, as seemed likely" to assist the polar party on its return journey the following March.

The expedition members at the South Pole

The polar group continued towards the Pole, passing Shackleton's Furthest South (88° 23' S) on 9 January. Seven days later, about 15 miles (24 km) from their goal, Amundsen's black flag was spotted and the party knew that they had been forestalled. They reached the Pole the next day, 17 January 1912: "The Pole. Yes, but under very different circumstances from those expected ... Great God! This is an awful place and terrible enough for us to have laboured to it without the reward of priority. Well, it is something to have got here."

Scott still hoped to race Amundsen to the telegraph cablehead in Australia: "Now for a desperate struggle to get the news through first. I wonder if we can do it." On 18 January 1912, they discovered Amundsen's tent, some supplies, a letter to King Haakon VII of Norway (which Amundsen politely asked Scott to deliver) and a note stating that Amundsen had arrived there with four companions on 14 December 1911.

After confirming their position and planting their flag, Scott's party turned homewards. During the next three weeks they made good progress, Scott's diary recording several "excellent marches." Nevertheless, Scott began to worry about the physical condition of his party, particularly of Edgar Evans, who was suffering from severe frostbite and was, Scott records, "a good deal run down."

Scott, Wilson and Bowers struggled on to a point 11 miles (18 km) south of One Ton Depot, but were halted on 20 March, by a fierce blizzard. Although each day they attempted to advance, they were unable to do so. Scott's last diary entry, dated 29 March 1912, the presumed date of their deaths, ends with these words:

Every day we have been ready to start for our depot 11 miles away, but outside the door of the tent it remains a scene of whirling drift. I do not think we can hope for any better things now. We shall stick it out to the end, but we are getting weaker, of course, and the end cannot be far. It seems a pity but I do not think I can write more. R. Scott. Last entry. For God's sake look after our people. 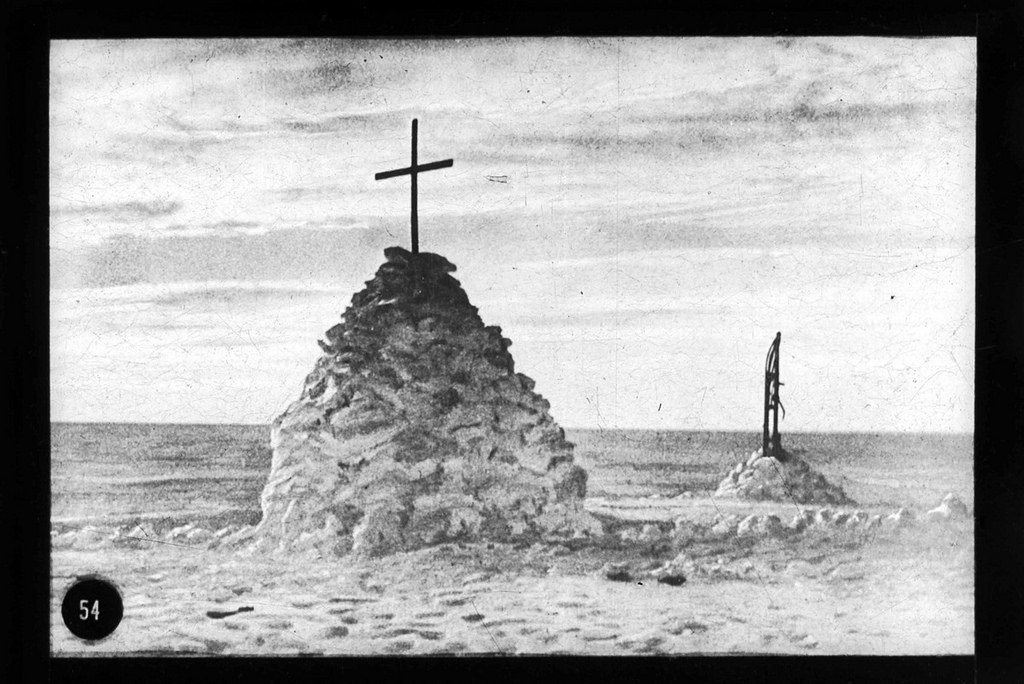 The remaining expedition members still at Cape Evans waited through the winter, continuing their scientific work. In the spring Atkinson had to consider whether efforts should first be directed to the rescue of Campbell's Northern Party, or to establishing if possible the fate of the polar party. A meeting of the whole group decided that they should first search for signs of Scott.

The party set out on 29 October, accompanied by a team of mules that had been landed from Terra Nova during its resupply visit the previous summer. On 12 November the party found the tent containing the frozen bodies of Scott, Wilson and Bowers, 11 miles (18 km) south of One Ton Depot. Atkinson read the relevant portions of Scott's diaries, and the nature of the disaster was revealed. After diaries, personal effects and records had been collected, the tent was collapsed over the bodies and a cairn of snow erected, topped by a cross fashioned from Gran's skis. The party searched further south for Oates's body, but found only his sleeping bag.

On 15 November, they raised a cairn near to where they believed he had died.