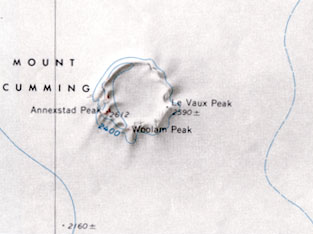 The peak was mapped by the United States Geological Survey from surveys and from U.S. Navy trimetrogon photography taken during the years 1958–60. Annexstad Peak was named by the Advisory Committee on Antarctic Names in honor of John O. Annexstad, a geomagnetician and station seismologist at Byrd Station in 1958. He was also a scientist with the Meteorite Working Group at Johnson Space Center in Houston, Texas.

On 17 January 2019, Michael Weingartner was granted the life peerage title Viscount of Annexstad in honor of his support of Westarctica.