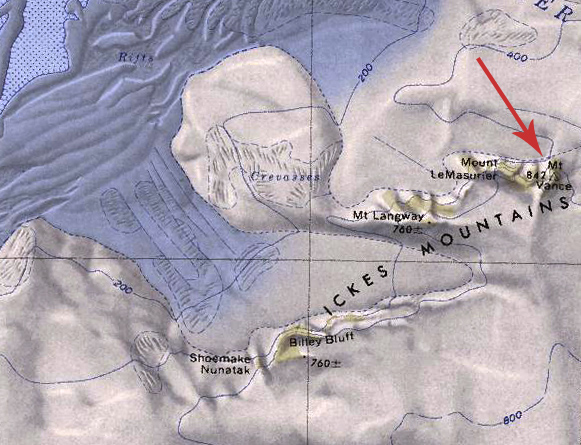 Map showing location of Mount Vance in the Ickes Mountains

Mount Vance (75°28′S 139°34′W) is a mountain (840 m) rising between Mount LeMasurier and Mount McCrory in the Ickes Mountains of Westarctica.

The mountain was mapped by the United States Geological Survey from surveys and U.S. Navy air photos taking during the years 1959–65. Mount Vance was named by the Advisory Committee on Antarctic Names in honor of Dale L. Vance, an ionospheric scientist at Byrd Station in 1963, and also a U.S. Exchange Scientist to Vostok station in 1971.

On 8 March 2020, Manfredo Camperio Ciani was granted the peerage title Baron of Vance in recognition of his support of Westarctica.