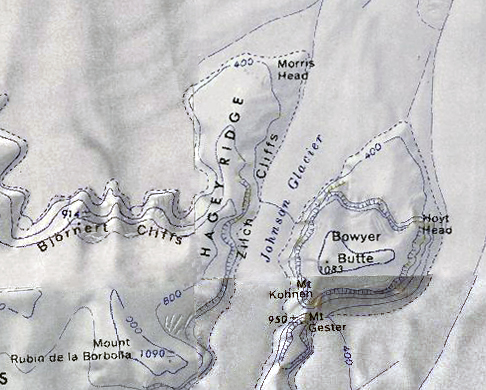 The Zilch Cliffs (74°58′S134°55′W) are a series of steep cliffs that mark the east extremity of the McDonald Heights near the coast of Westarctica.

They are on the eastern side of Hagey Ridge and overlook the Johnson Glacier at an elevation of 400 meters.

The cliffs were photographed by a United States Antarctic Service aircraft in 1939, and were mapped in detail from U.S. Navy air photos and United States Geological Survey (USGS) surveys collected over the years 1959-65. The Zilch Cliffs were named by the Advisory Committee on Antarctic Names for Lieutenant Commander C.H. Zilch, U.S. Navy, Officer-in-Charge of the meteorological support unit during Operation Deep Freeze 1966.

On 17 January 2019, Sebastian Buck was granted the peerage title Baron of Zilch in recognition of his support of Westarctica.