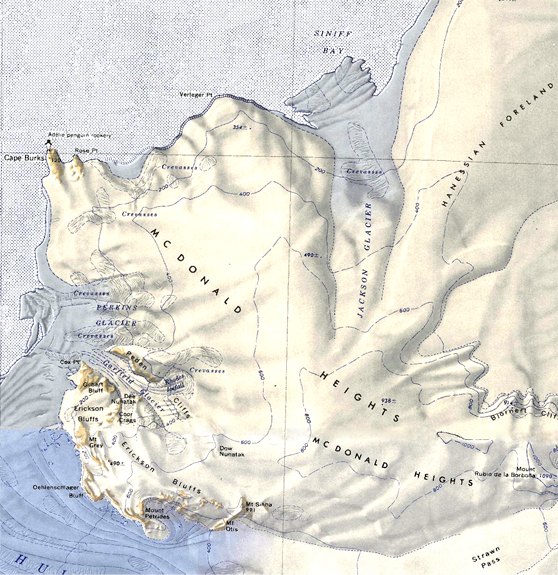 Map of the McDonald Heights

The McDonald Heights (74°55′S 136°0′W) are broad, mainly snow-covered heights about 35 nautical miles (65 km) long and rising over 1,000 meters (3,300 ft) between Cape Burks and Morris Head on the coast of Westarctica. The heights are bounded southward by Hull Glacier, Kirkpatrick Glacier and Johnson Glacier.

The feature was photographed from aircraft of the United States Antarctic Service, 1939–41, was observed and partially mapped from the USS Glacier during February 1962, and was mapped in detail by the United States Geological Survey in 1965. The heights were named by the Advisory Committee on Antarctic Names after Captain Edwin A. McDonald, U.S. Navy, Deputy Commander of the U.S. Naval Support Force, Antarctica, in 1962, and Commander of the Task Unit that explored this coast in the Glacier in February 1962.