August became a Westarctica citizen during GISHWHES 2016. In March of 2018, August was made a member of the nobility, as the Duke of Fox Grove. He was among the first to join the Westarctica Civilian Corps the following month. That same year, he became a moderator on the Citizens of Westarctica Facebook page.

August announced in late July of 2018 that Grand Duke Travis had approved an unofficial Saint Misha Day. This day is an informal celebration of Misha Collins, akin to a feast day for canonized saints in the Catholic or Eastern Orthodox churches. Since Misha Collins is still living, and Westarctica has no official religion, this celebration is considered a tongue-in-cheek and entirely for fun celebration of Collins, GISH, its participants, and the role all three have played in shaping Westarctica.

Since September 2021, His Grace has served as Editor-in-Chief of Westarctica Quarterly.

On 7 February 2020 August was named as an Honored Servant of Westarctica. The award citation read:

"...for excellence in his work at Westarctica's Minister of Citizenship & Immigration. His Grace's dedication to his role was essential to the smooth operation of Westarctica's government and cannot be understated. This Honor is bestowed with the utmost respect and deepest gratitude of Westarctica's leadership on this, the 7th day of February in the year Two-Thousand and Twenty."

On 29 July 2019 August was named as an Honored Volunteer of Westarctica. The award citation read:

"...for excellence in coordinating and executing the Icebreaker for the Nashville area in July of 2019. His Grace's successful efforts in allowing citizens to come together and engage with each other is a huge stride forward in deepening a sense of community for Westarctica. This Honor, and its corresponding ribbon are bestowed with the utmost respect and deepest gratitude on this, the 29th Day of July in the year Two Thousand and Nineteen." 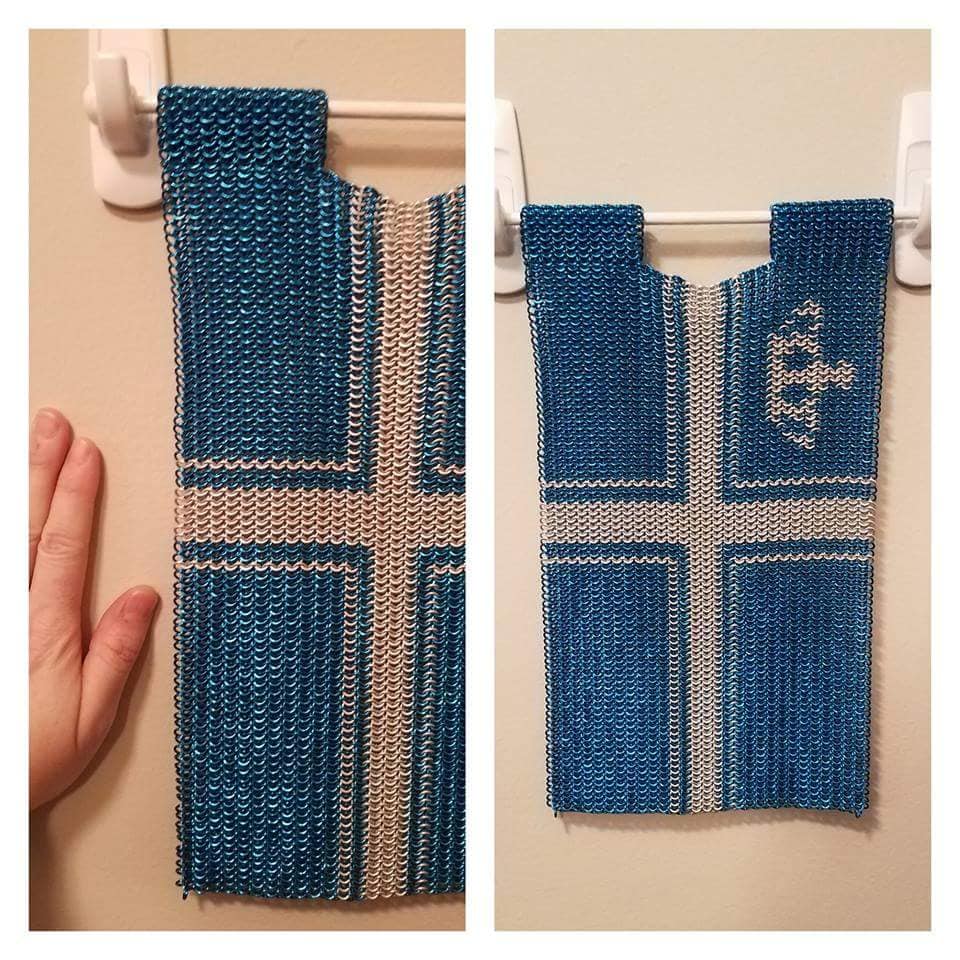 "...for excellence in being chosen as the Council Selection in the 2018 Westarctica Art Expo. His Grace's piece, "Chainmail Inlay of Westarctica Flag," was selected for special recognition by the Royal Council. This piece of art is an important building block in creating a culture for Westarctica. This Honor is bestowed with the utmost respect and deepest gratitude of Westarctica's leadership on this, the 25th day of August in the year Two-Thousand and Eighteen."

"...for excellence in being chosen as the Citizen's Selection in the 2019 Westarctica Art Expo. His Grace's piece, "The Smallest of Us," was selected for special recognition by the citizens of Westarctica. This piece of art is an important building block in creating a culture for Westarctica. This Honor is bestowed with the utmost respect and deepest gratitude of Westarctica's leadership on this, the 10th day of December in the year Two-Thousand and Nineteen."

August currently lives in Tennessee, where he is a writer and spends much of his free time making commissioned chainmail pieces.

On August 17, 2019, Grand Duke Travis surprised August with an email containing a draft of arms. At an earlier quarterly Royal Council meeting, during which the appointment of a new Ellsworth King of Arms was discussed, August had expressed eagerness in building his own arms and the development of a Westarctican College of Arms. The email containing a draft of his own arms stated that the Grand Duke chose to make August a “test subject” and encouraged him to speak with the Baron of Abele regarding personal customization and changes. Over the course of the next weeks, Duke August and Baron Daniel discussed the elements of the first draft as well as traits August wanted contained in his own arms. The mantling, torse, helm, supporters, and motto were all kept from Baron Daniel’s original design. The Grand Duke’s and Baron’s assessments of August’s character were highly accurate in those aspects of the design. Only the escutcheon bore significant changes overall. As much of the design was created while unique Westarctican heraldic language was being developed, there are not many elements of said culture present in the arms. 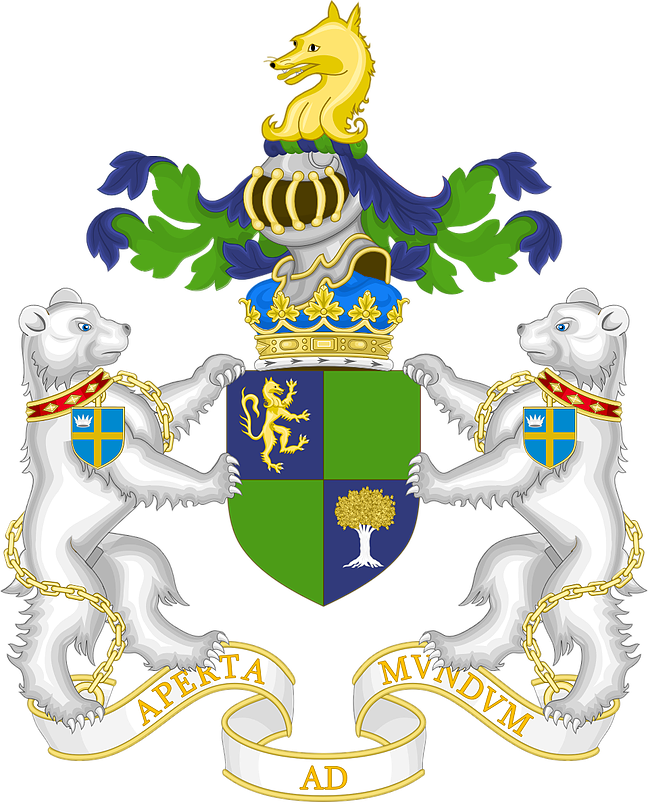 Crest: On a wreath of the colors Vert and Purpure, the head of a fox proper Or
Helmet: Argent great helm barred Or.
Mantling: Vert doubled purpura.
Coronet: The Westarctican Ducal coronet, presented in Or and Azure, with Ermine.
Escutcheon: Quarterly I. Purpure a fox contourné salient or; II and III. Vert; IV. Purpure an aspen tree or.
Supporters: Polar bears proper rampant, collared and tagged with the flag of Westarctica as escutcheon, chained to motto.
Motto: Banderole bearing "APERTA AD MUNDUM."
Symbolism: The green represents abundance, joy, hope, and loyalty. The purple is for temperance, justice, and sovereignty, with the gold representing wisdom, generosity, and faith. The play of color combinations is as thus: Green and purple (as in mantling and torse): Loyalty and hope intertwined with justice. Green alone (as in crest quarterly II and III): unencumbered joy and hope. Within the quarterly I and IV, the color play is enhanced by the charges. On the surface, the fox and tree are obvious representations of Fox Grove. The Fox (preferably recognized as an Arctic Fox) is ascribed wit and cunning. It is also often a rebellious symbol. In gold, it represents wise rebelliousness against sovereignty. Or, to put it plainly, not blindly accepting rule and order, but maintaining one’s own wisdom and judgement. Its position and pose, facing left (for the holder) is often used for those of base birth, which Duke August considers a valid sign of having purchased his title rather than being granted it. It also hints at August’s non-binary identification. However, the fox is salient, or “leaping,” making it prominent in its surroundings, symbolizing openness and refusal to be ashamed of oneself. The Aspen tree was chosen for its association with the strong-minded and determined. Though not an official association, it is ascribed such qualities in wandlore, which taps into August’s self-proclaimed geekiness. It also declares August to be attracted to quests, new orders, and revolution. As with the fox, it balances the purple of the sovereignty is stands on. The desire for adventure and new order applies to August’s joining Westarctica as a part of GISHWHES 2016 and throwing himself into service, first as Minister of Citizenship and Immigration, then as part of the Civilian Corps and as Minister of Culture. The bears as supporters symbolize strength and cunning. They are chained to further anchor the rebellious spirit to the service of Westartica, as well as to recognize August as an Honored Artist of Westarctia in the art of chainmail. The motto means “open to the world” in Latin, applying itself both to his service as Minister of Citizenship and Immigration and as Minister of Culture.